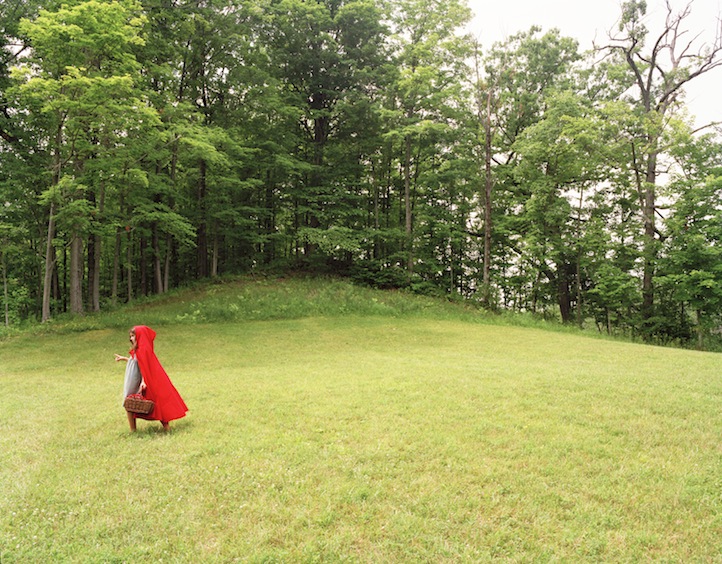 Her landscapes are, at times, expansive. She once retraced the Transatlantic Slave Trade on a two-year sojourn with monks. She completed the last portion of the route hitchhiking with a friend and her camera. “Those landscapes hold a certain weight because I walked them.” 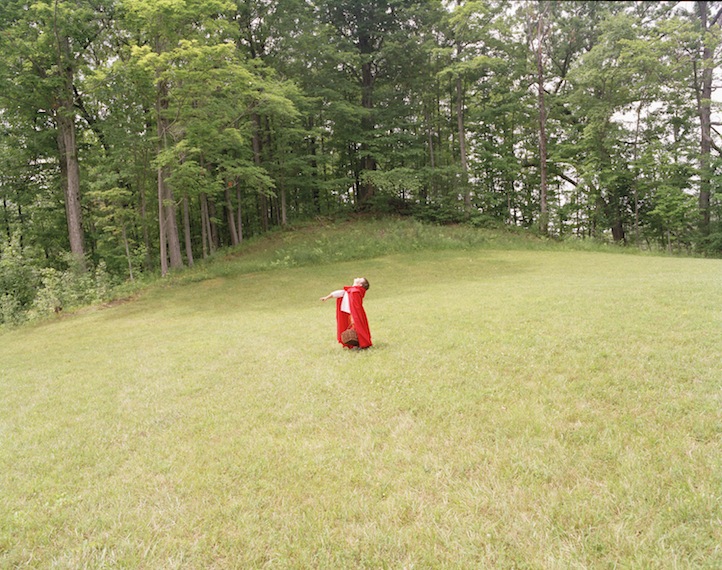 In the photo, “If We Believe In Theory,” a young girl stands in the clearing of forest wearing a red cape and carrying a wicker basket, a nod to Little Red Riding Hood. For the photo “Canyon,” the subject appears with a video camera peering at the majestic surroundings of the Grand Canyon. Simmons often appears in her photographs. “I’m also an actor in the work,” she says. “I don’t consider them self-portraits, but I look to the landscape. For me landscape is so romantic.” 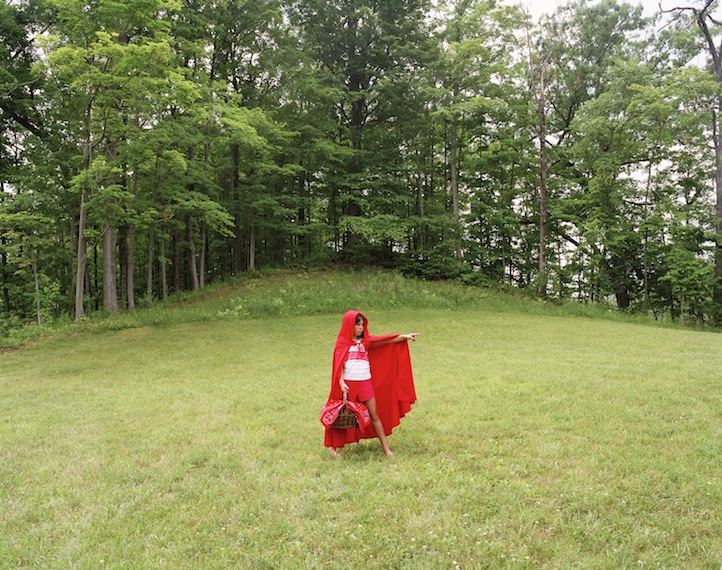 In portraiture, she captures her subjects — including herself — with striking poignancy. In “One Day and Back Then”, clad entirely in black clothing, her face is painted the color of coal, defined by crimson lips, as she is shrouded by a tall field.

Simmons was trained as a photographer, but she also sculpts, DJs and creates large-scale installations. In the 2010 wood installation, “Harvest” she used 231 wood panels with poetic text hand painted on the surface.

The New York native attended boarding school in Connecticut, where she started taking photographs, and later expanded to sculpture and theater pieces. “Photography is about light and how your eye deals with light,” she says. “Digital processes are so a part of our lives. I love to touch a vinyl record. If I have a vinyl record I’ll play it and the sound quality is rich and the same with the (film) negative.” She earned her B.F.A. in photography from Bard College in 2004 and completed the Whitney Museum Independent Study Program the following year. 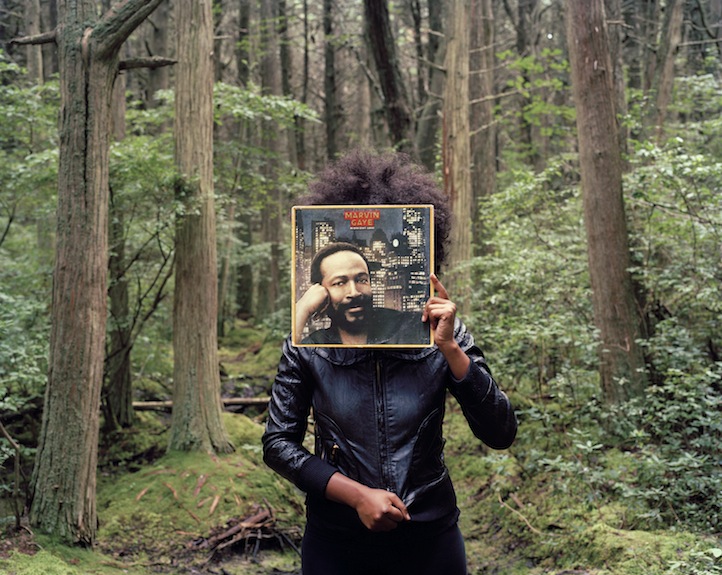 Simmons thrives when she is engaged in multiple projects out of her Brooklyn studio. She is wrapping up a six-year effort to take portraits in the New York City streets that is culminating in a public exhibition through the organization More Art. “For a long time I’ve done a series of free portraits and taken pictures of people passing by where there are people who aren’t running to museums.” She shoots on film with a 4 x 5 camera and handprints each photograph. “It’s meditative to print each image. A lot of it is digital feed print, but I still go into the darkroom and make work. I liken it to analog.” For the upcoming exhibition, she is focusing on predominantly Latino and African-American subjects that live in the Fulton Houses in Chelsea, who offer their memories to inspire the mood of the photos. 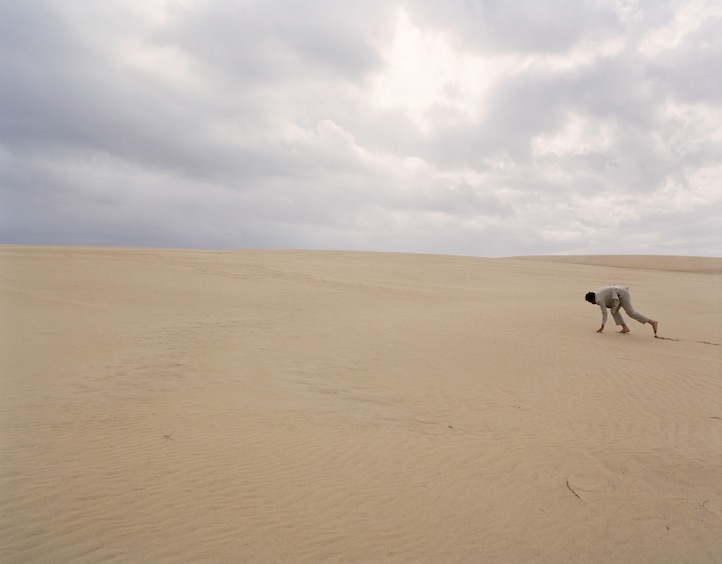 She transfers her philosophy on art to her DJing gigs, which include regular rotations for Mayor Bloomberg’s events. “How I DJ is kind of conceptual,” she says. She’s found ways to meld her passion producing her first record with the Nasher Musuem of Art at Duke University, for the commissioned work “Thundersnow Road.” Simmons took photos on a North Carolina road trip and then asked ten musical artists to create a conceptual musical artwork as a response to their assigned photos. “They constructed a narrative based on the photographs,” she says. Songs by participating artists Mac McCaughan of Superchunk, Tunde Adebimpe of TV on the Radio and Jim James of My Morning Jacket were pressed on a 12-inch record. 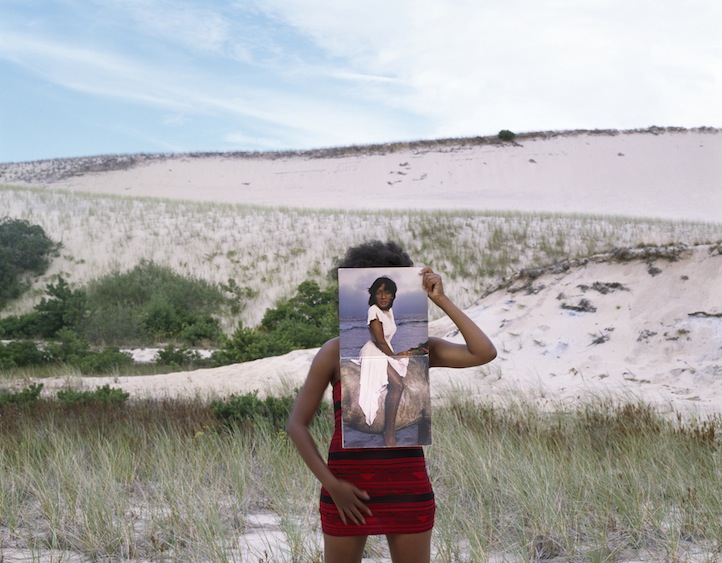 Simmons has several other upcoming shows, including an exhibition at a non-profit gallery in Cairo, in Miami Art Basel with David Castillo Gallery and a solo show of her work at Nicole Klagsburn Gallery next spring in New York.