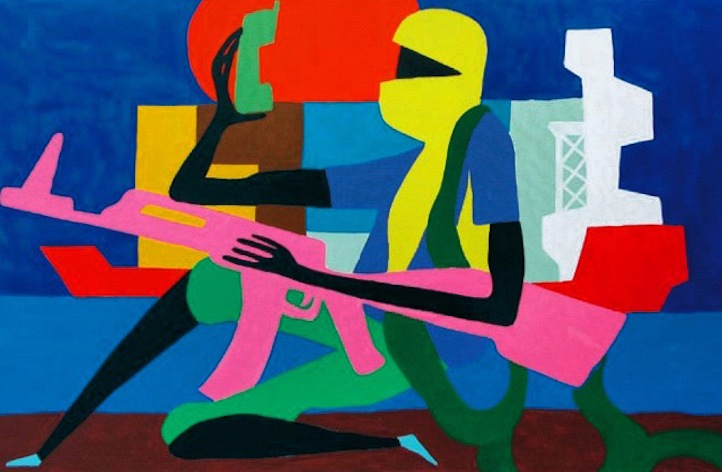 November 13th marks the opening of “Beyond Elegance,” an exhibition of multimedia works by Todd James and Alexis Ross who are both known for their tongue-in-cheek use of animation-inspired imagery. James’ large-scale canvases satirize the contemporary socio-political landscape, pulling subject matter from world events and day-to-day situations. He filters serious themes of war, excess, and natural disasters through the veil of deceptively innocent, un-self-conscious lines. Here, James sheds some light on what to expect from his upcoming exhibition and offers a preview of some of the images that will be on display.

Life+Times: You’re about to be featured in Andy Valmorbida’s upcoming exhibition, “Beyond Elegance.” How did this experience come about?
Todd James: Initially Pat Tenore suggested I do a project with Andy, and he brought Alexis and me together. 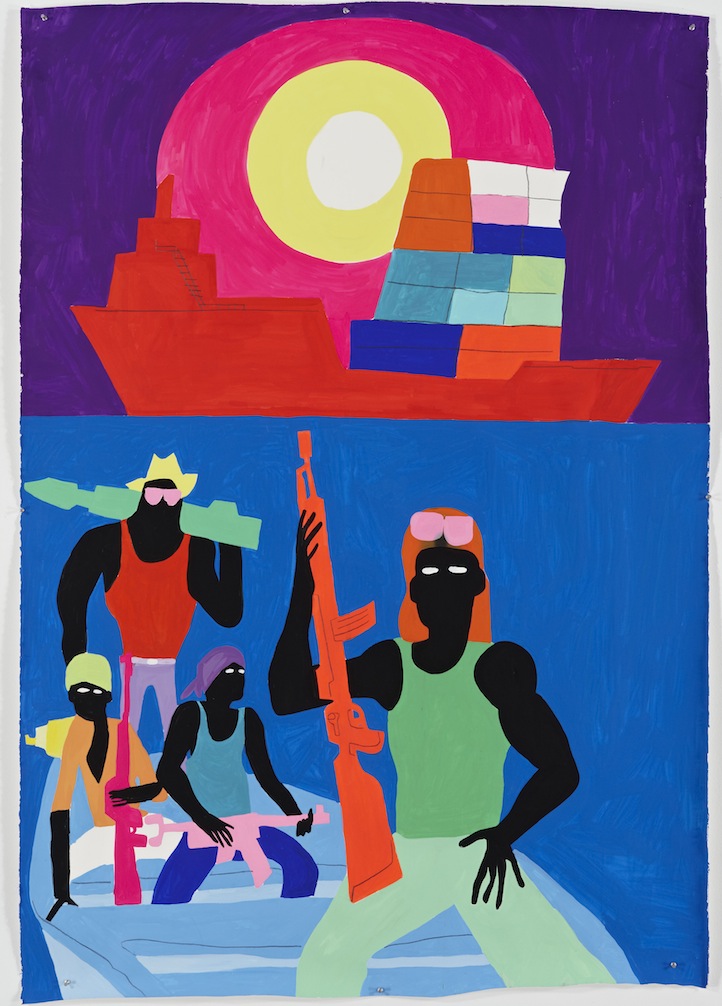 L+T: You come from the generation of ‘self-taught’ artists. What was your first experience with paint?
TJ: I did not go to art college. However, my father was an artist who got his Master’s Degree at Yale. From an early age, I was encouraged to draw. One of my first experiences with paint that I remember is from when I was 12. I was working with spray paint and it was dripping and just a mess. I realized in that moment that I had a lot more to learn, which was both frustrating and motivational. 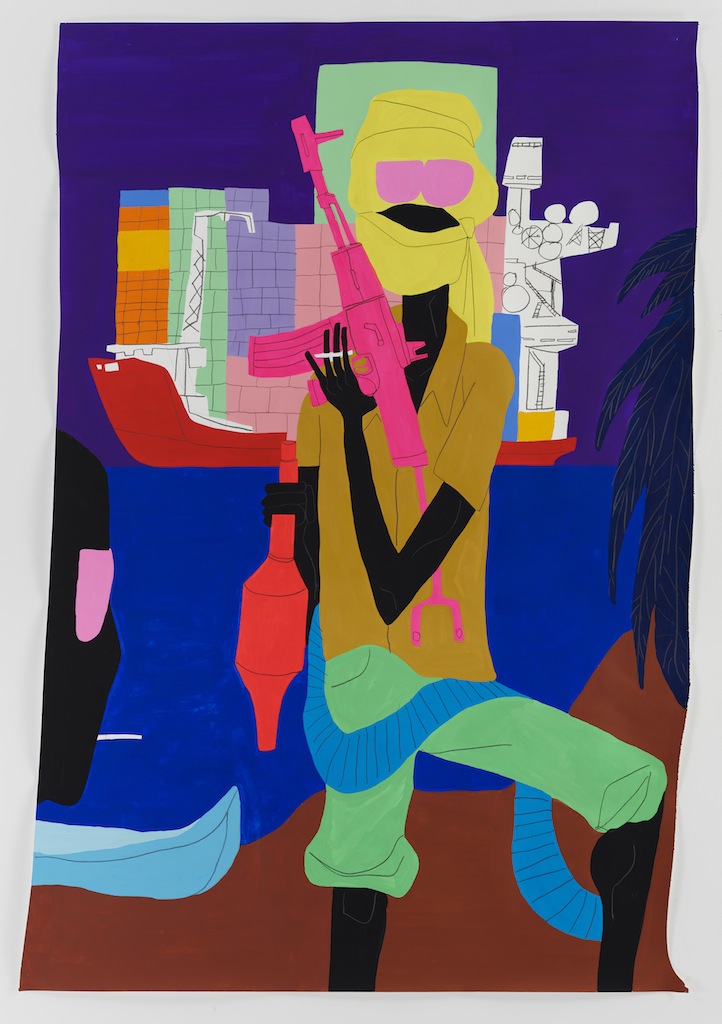 L+T: You’re also the co-creator of Street Market, a major work of the post-graffiti movement that was selected for the 2001 Venice Biennale. Can you tell me a little bit more about this?
TJ: Street Market was a collaboration with Steve Powers and Barry McGee that was born out of everything I had done up to that point. Before Street Market, I had been doing graphic design, mostly logos and record covers, for hip-hop groups such as The Beastie Boys, Mobb Deep, Kid Rock, and Redman, and had no intention of doing fine art or anything involving galleries. In the late ’90s, I began running into Steve Powers and found we had similar ideas about graffiti and the same sense of humor. Steve at that time was doing On the Go Magazine which I would describe as The Source meets Mad Magazine. He was also painting these large ESPO gates all over the city and developing signage ideas. We came up with an idea to do a bodega filled with REAS and ESPO brand products that we designed, including various things like canned Street Cred, Shit, and bottled Shame. Steve looked into getting a grant in Philly, which we received a few months later. The curator asked Steve to reach out to Barry with the intention that Barry would fill a space right next to ours in the Philly ICA. We had the run of the ICA day and night for two weeks. There was a lot of great energy that went into it and I think we brought a friend in to help. Jeffrey Dietch, who represented Barry in NYC, came to the opening and thought we should do it bigger in his space on Wooster Street. After Dietch Projects, it was chosen for the Venice Biennale. We shipped it in big containers and rebuilt it there. I had no idea what the Venice Biennale even was, at the time. In 2011, we rebuilt a bigger version for the L.A. MoCA’s “Art in the Streets” exhibit. 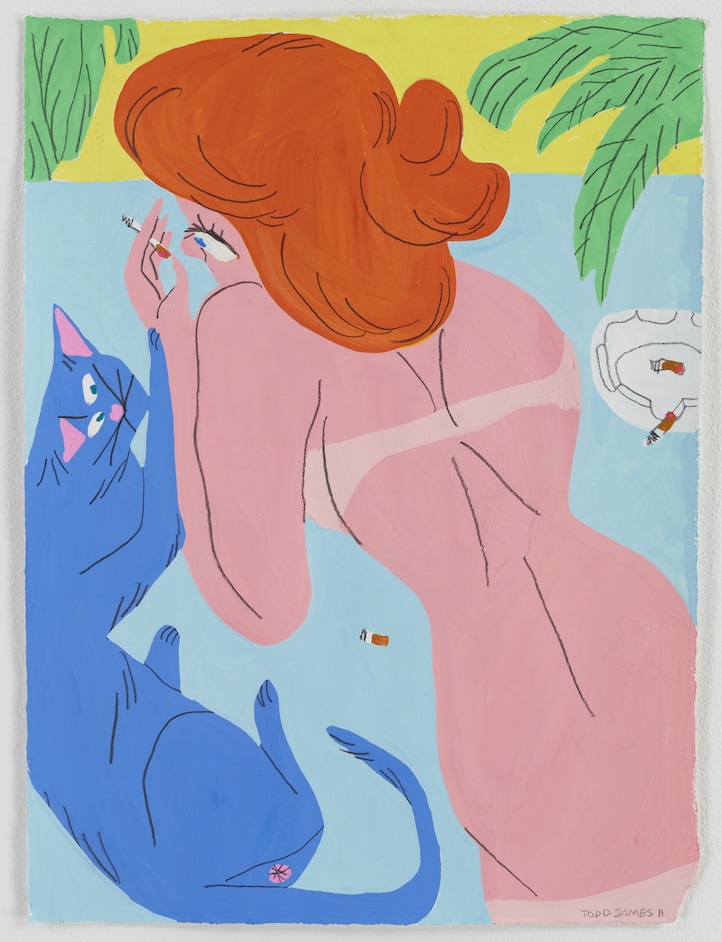 L+T: What’s behind the name “Beyond Elegance”?
TJ: It is a show of paintings and drawings. Alexis and I are going to have a structure we are building in the center to hang out in. The Structure will mostly be his “Caffe Legs” nap spot and I will have some sign paintings and some light boxes on the back of it. The name is aspirational, similar to “Falcon Crest.” We need new horizons and going “Beyond Elegance” is a place even Capt. Kirk and Spock never brought the enterprise. However, we will get there November 13th. 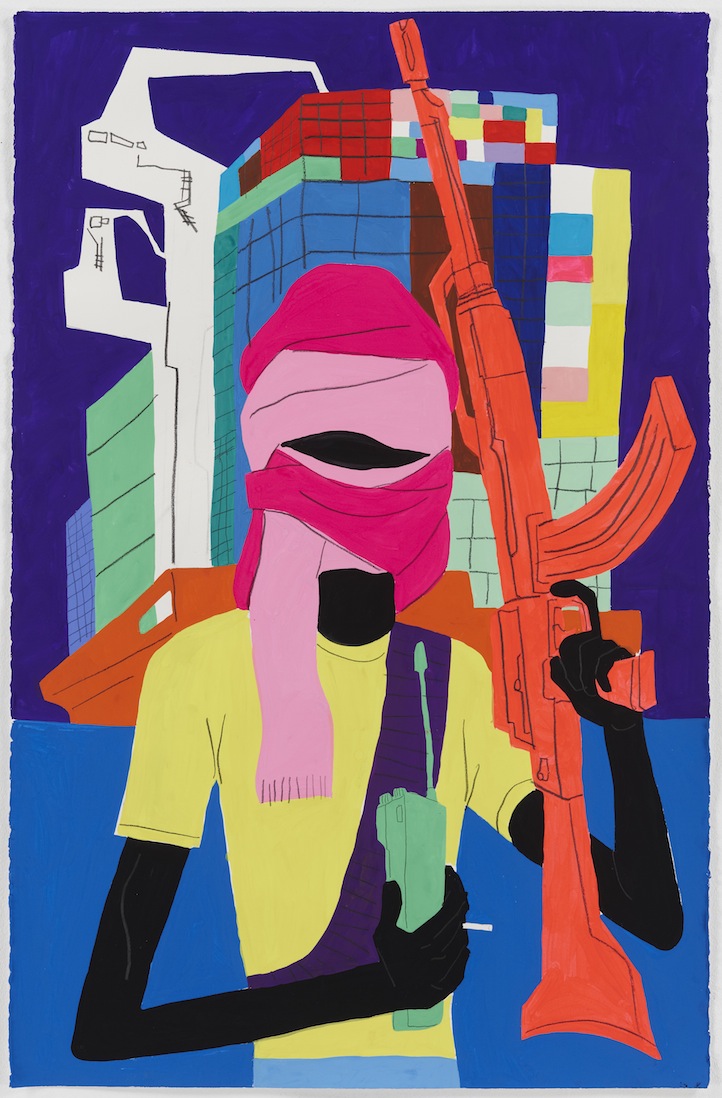 L+T: The program also features the works of Alexis Ross. What synergies do you see between your collective works?
TJ: We both sometimes draw people who have tiny feet, but aside from that we share a point of view.

L+T: Your large-scale canvases satirize current socio-political happenings. What is it about this realm that has always been of interest to you?
TJ: As SKEME’s mother said in Style Wars, “You got to laugh to keep from crying.” That often describes my motivation. Right now, I’m focusing on that. 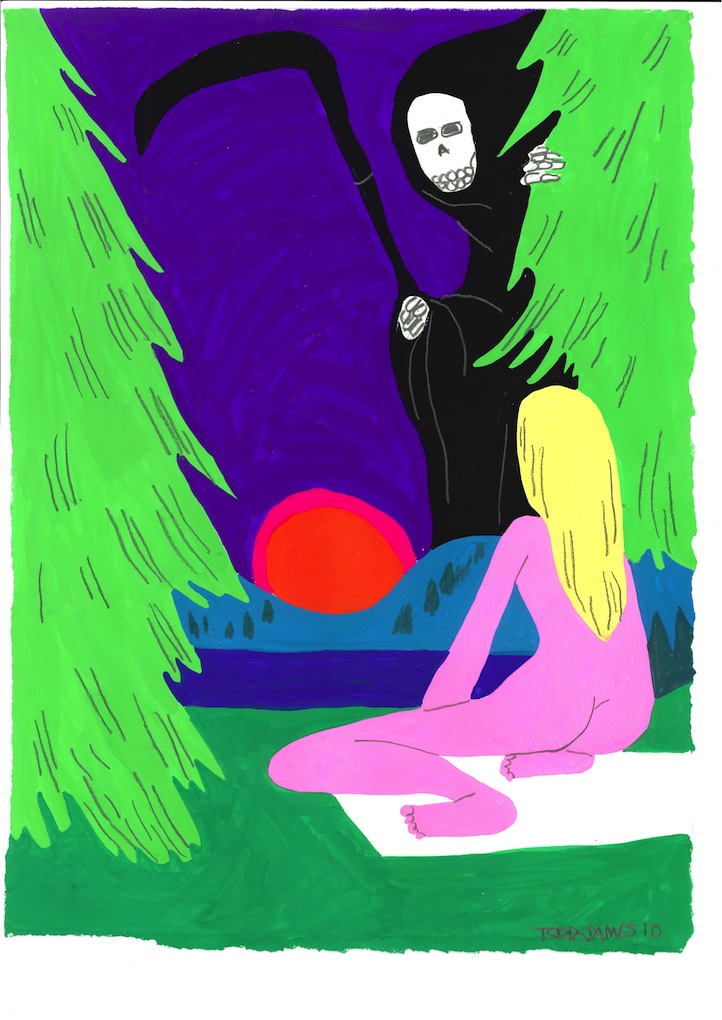