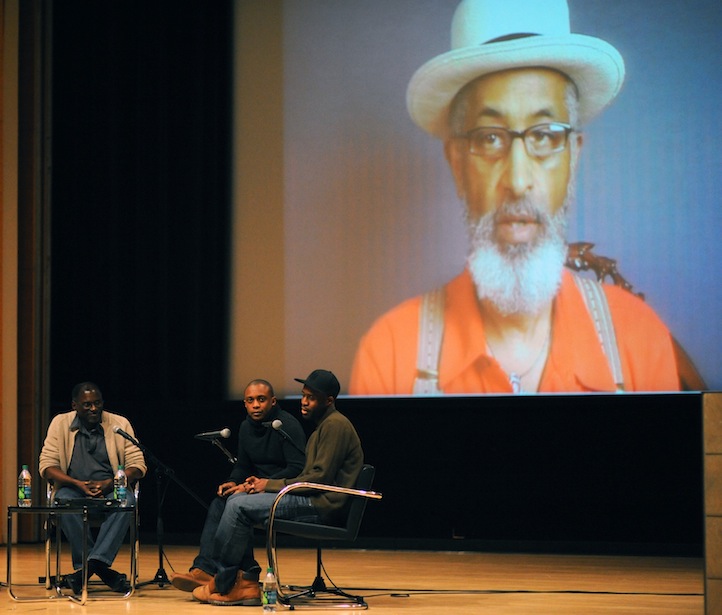 Question Bridge is an extensive transmedia project and exhibition intended to change perceptions of black male identity. The project creators include Hank Willis Thomas and Chris Johnson in collaboration with Bayete Ross Smith and Kamal Sinclair. The collective filmed 160 black men in 16 American cities posing questions and offering answers. The compelling question and answer format makes up the exhibition that is broadcast across five adjoining screens, currently on view at both the Brooklyn Museum until July 15. The questions are poignant, insightful and reflective. The format emphasizes the productive nature of dialogue and the positive impact of a multi-generational conversation. Thomas spoke with Life + Times about The Question Bridge’s impact thus far and its future.

Life+Times: What is the intent behind Question Bridge?
Hank Willis Thomas: Each of my collaborators would probably answer this question differently. My personal goal is toward liberation, and I see that happening in part by showing that there is as much diversity in any demographic as there is outside.

L+T: What was the process for gathering subjects?
HWT: We traveled the country and facilitated a conversation between 160 men from 12 different cities with the ultimate result of having more than 1600 question and answer exchanges. We met people by any means necessary, for instance, on the street, and in schools, offices, jails, and homes.

L+T: How has the project been received in Brooklyn and Oakland?
HWT: The project premiered in January at the Sundance Film Festival, Utah MOCA, the Chastain Art Center in Atlanta and the Oakland and Brooklyn Museums to an overwhelmingly positive response. I have never been part of project that has had such deep personal affect on so many people. It is estimated that 50,000 people have seen the project so far in last 6 months. What’s also exciting is that the project will travel to the Sheffield Doc/Fest and we will be doing a special screening at the Los Angeles Film Festival, thanks to Jesse Williams from Grey’s Anatomy, one of the project’s executive producers.

L+T: What’s next for Question Bridge?
HWT: As we continue to travel the exhibition, it will hopefully go to Houston, Chicago, Philly, Birmingham, as well as another venue in New York City. The curriculum has been piloted in high schools in New York City and California. The momentum has been amazing.