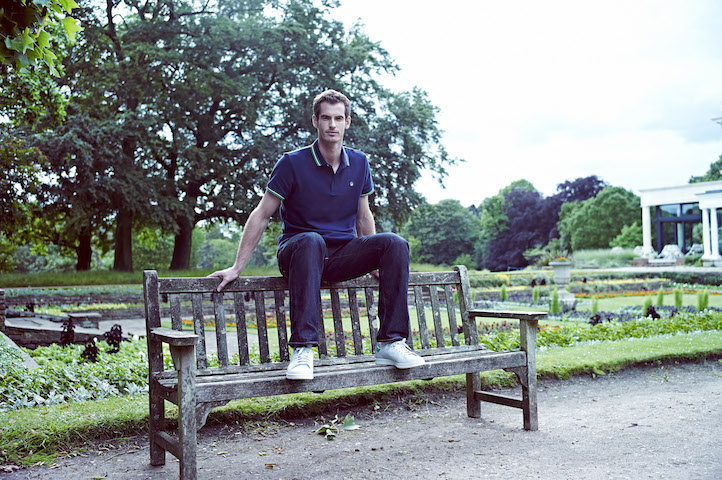 Andy Murray can already boast to being Great Britain’s most successful tennis player. The 27-year-old has been ranked the number one British player since 2006 and holds the Grand Slam Title wins for the 2012 US Open, the 2013 Wimbledon, as well as being the current reigning Olympic Singles Champion.

Now with the 2014 US Open underway, Murray is once again hoping to make history. Life + Times caught up with the tennis player to find out exactly how his mindset is right now, what he does to relax, and what we can find on his iTunes playlist.

Life + Times: Do you feel more more pressure to deliver after winning Wimbledon in 2013 and the US open in 2012?
Andy Murray: Not really, I put pressure on myself to succeed and that keeps me motivated and focussed. In any sport, once you win, there is a different kind of pressure to keep winning. I know how it feels and what it takes to win a Grand Slam, and that’s why I train every day. I definitely feel I can win more Grand Slams.

L+T: How have you felt with your performance of late?
AM: I have struggled with my consistency, however I feel like recently my training has been going better than ever. I have been able to train at 100 percent over the last few months, which previously before Wimbledon and the French Open, I wasn’t completely confident in doing. It’s always tough to return after you take a long break, however I’m confident I’m progressing in the right direction, it’s just a case of being patient and working hard.

L+T: How would you describe your relationship with new coach Amelie Mauresmo ahead of the tournament?
AM: It’s really good. She’s great and we get on really well, she settled in like she had been a member of the team for years, which is good. It’s obviously a completely different dynamic to what I have been previously used to, but in my opinion things are going very well and as a team, we are making progress.

L+T: Do you ever hang out with musicians?
AM: I don’t really have many “celebrity friends”; I spend so much time on the tour it’s often tough to find time to spend time with friends from home let alone famous faces I have met during my career. I quite often bump into other famous sports people on the tour and always enjoy talking to them, it interests me to learn how they succeed in their sport. A few days ago I met Rory Mcilroy and Klay Thompson in different restaurants, and we got talking about each other’s sports, the similarities and differences and it’s fascinating. I ended up going to the golf with Rory the next day, and watching basketball at Madison Square Garden that night, which was amazing. It’s cool seeing other athletes close up, and you appreciate all the hard work and dedication.

L+T: US Open must be a stressful time. How do you relax?
AM: When I’m on the tour in the evening it’s usually out at restaurants with the guys in my team or other players on tour. I sometimes have my PlayStation with me, so we’ll normally be playing some FIFA or Pro Evo, sometimes against other tennis players, which always provides some competitive banter. I’m quite into my fantasy sports, so you’ll often find my making tweaks to my basketball of football teams. When I am at the home, I love to spend time with my dogs and my girlfriend, I don’t get to see them as much as I wish I could so it is always great to be back in my own space. There really is no place like home!

L+T: You are known to watch a lot of sports . Who are some of your sporting icons and heroes ?
AM: For me that’s easy –  Muhammad Ali. His work ethic and dedication to always want to be the best is one of the greatest examples of what it means to be a professional sports person. But as important where his values and what he stood for, and he’ll always be remembered as one of the greatest. In terms of tennis players, I loved watching [Andre] Agassi growing up, I even had some of those denim-cycling shorts he wore… not a good look!

L+T: Do you get annoyed at people always saying you look miserable and don’t have a sense of humor?
AM: Haha, not really. I have a very dry, sarcastic sense of humor, which not everyone gets. Even those close to me struggle sometimes! To be honest for me it comes down to the fact that I’m a professional sportsmen and I take my job very seriously. I think there’s a time and place to be messing around and having fun, and during competitive matches I m completely focussed on winning. Off the court I like to think I have just as much fun as everyone else, my team and I are regularly pranking each and handing out forfeits for stupid things. People often just see me on the court so the behind the scenes stuff is a side that not many people see. I’m also quite a shy and private person, so being in the limelight isn’t something that comes naturally.

L+T: What is the motto you live by?
AM: “Always look to improve yourself and no matter how tough things get, never give up.”

L+T: How is your mindset right now ?
AM: I’m feeling good, I’ve worked incredibly hard over the last few months and I know I have prepared myself for the second half of the season as best as I know I can, so I can take confidence going into matches,

L+T: Three songs you currently can’t stop listening to?
AM: “Don’t” by Ed Sheeran, “Of the Night” by Bastille and “Help Me Lose My Mind” by Disclosure featuring London Grammar.

L+T: You have the hotel, what other ventures do you have in the pipeline?
AM: I am interested in the business-side of tennis and sports and am always looking for new areas to invest in and explore. I set up my own company shortly after Wimbledon, [77 Group], and the plan is to build a group of companies within sport that I can take an active interest in once I’ve finished playing, which won’t be for a while yet! I’m keen to be able to help other young sports stars of the future as well, and pass on some of what I have learned, so it’s definitely an area we are looking at right now. Aside from property, and the hotel I bought in my hometown, Cromlix House, I’m interested in the role technology plays in sports, especially wearable technology and we are taking to a few companies in this space. The whole area of crowd funding is also interesting and there are plenty of exciting developments in this area right now. So watch this space.

L+T: Finally, what would you like your legacy to be ?
AM: For me, the importance of hardwork and dedication cannot be underestimated. Throughout my career I’ve continually pushed myself and although I’ve made lots of mistakes and had plenty of tough losses, it’s about responding and learning from those times.