Aloe Blacc beats by dre dr. dre How To Make It In America jimi hendrix Lift Your Spirit 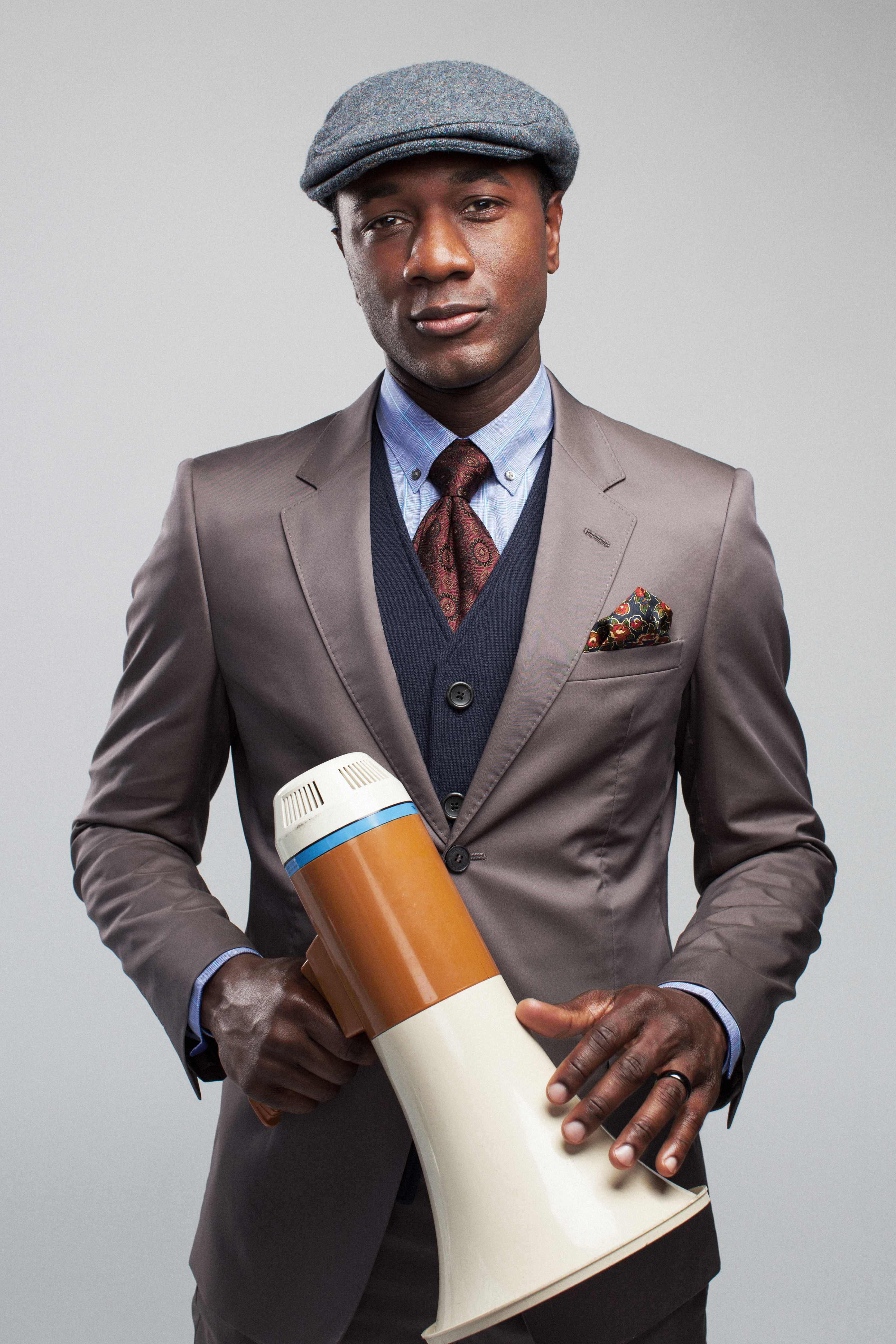 Singer and songwriter Aloe Blacc has used his music as a platform to broadcast a message of positivity to as wide of an audience as possible. This is especially true on his new LP, Lift Your Spirit (available now), where his penmanship is met by a benign blend of soul, funk, rock, and hip-hop.

“What it comes down to in my songwriting is trying to tell the story of the underdog and all the obstacles they have to overcome in this life,” says Blacc. “The stories in my songs are about the common individual and all the struggles they’re dealing with everyday, and also all the hopes and aspirations that they have. It’s about reflecting all of that, and at the same time getting people to sing along and feel good and just celebrate being here.”

To be sure, plenty of artists have positive messages in their music but they often go under-received. Fortunately for Blacc, timely TV placements and collaborations have assisted his ascendence into America’s mainstream culture. In 2011, his single “I Need A Dollar” was used as the intro song on HBO’s How To Make It In America; in 2013, he collaborated with DJ Avicii, singing and co-writing “Wake Me Up!”, which topped charts in over 100 countries; and this year, his hit record “The Man” has been prominently featured in the Beats By Dre commercials.

As Blacc notes, if the music wasn’t good, those features would all be for naught. Life+Times spoke with Blacc about Lift Your Spirit, his path, his messages and more.

Life+Times: You’ve said you developed a new sound for Lift Your Spirit. How does this album compare to your last, Good Things?
Aloe Blacc: The last album was strictly classic soul, throwback soul, and funk. This time around, I wanted to update the sound and I wanted to use my hip-hop influence to do that. I grew up writing rhymes and making beats. I released my first mixtape in 1996, so that’s before rappers were on mixtapes. This is when DJs made mixtapes of other records. My DJ Exile, here in Southern California, had the bright idea to put 45 minutes of a mix he did of other artists on one side, and an album on the B-side with his beats and my rhymes. That was the beginning, we were both in high school still and that tape made it around the world. So, I had a really good experience being my own businessman back in the day. I wanted to create something new for this album that wasn’t strictly soul music. I wanted to introduce that hip-hop background with a little bit of classic rock, as well. I love listening to The Who and Led Zeppelin and Jimi Hendrix. But I didn’t want to abandon soul music because my fans know me mostly for soul. I kept a lot of soul in the vocals and the instrumentation. Every song is live instruments, I didn’t want to lose that touch.

L+T: Why were you now more comfortable bringing all of these sounds into your music? What brought you to that place?
AB: Before the last album – Good Things – was an album Shine Through. That album was a mixture of every genre you could imagine from hip-hop to soul to R&B to folk to dancehall to salsa. I have a Spanish version of “Ordinary People” on there. Because that album was such a mixture of different sounds, I had a chance to showcase all my different influences. But it didn’t do much in terms of allowing me to have an identity. When you do too much, there’s no central character that people can grab. So, I had to create something with Good Things that was not so diverse and sporadic. This time around, because I think I’ve established enough of a fan-base, I wanted to do back to that and introduce different sounds, but keeping it more structured. I wanted the sonic fidelity of a Dr. Dre album, the soulful musicality of a Stevie Wonder album, the rock attitude and  edge of a Jimi Hendrix album, with a folk soul vocal, an Al Green-slash-Bill Withers vocal.

L+T: Does that different musical palette influence your approach as a songwriter?
AB: No, it doesn’t affect my approach as a songwriter, but ultimately, it affects the songs that I choose for the album. I’m still writing in every genre, I can’t control that. Whatever comes up, I’ll write it and I don’t throw anything away. I’ll keep it for later, or there may be a different artist I can share it with. At the end of the day, I simply tried to fit the parameters I just mentioned for the album.

L+T: Many were introduced to your music through “I Need A Dollar” and its placement on How To Make It In America. More recently, “The Man” has been all over television in the Beats By Dre commercials. How important have those TV placements been in terms of bringing you to a wider audience? A lot of artists need radio, but you’ve taken an unorthodox path into the mainstream.
AB: It’s a real interesting living experience being in the mainstream industry now coming from the indie scene. When I released “I Need A Dollar”, it was a stroke of luck to have the placement on “How To Make It In America” because it gave the song visibility it otherwise wouldn’t have had. I never had it for my earlier releases. It was invaluable definitely, because it helped to increase my visibility around the world, especially in Europe where the way the music business is done is very different from the US. In the US, it’s an aristocracy: if you’ve got money, you can pay to play. In Europe, it’s a meritocracy: if it’s good, they’ll play it. I was able to go over there and have gold records, platinum sales and all that just because if it’s good, they’ll play it. In the US, I didn’t have money to play the game. At an indie label, you don’t have money for radio promotion, you don’t have a story to tell. The labels keep saying, “We need to go to radio with a story, we need to go to television promotions with a story.” I’m like, “How about that the song is number one all over the radio in Germany, France and England. Is that a story?” And they’re like, “No, we don’t care, it’s not America.” Luckily, I got with Interscope and they have the infrastructure and the resources to make it happen. The Beats By Dre commercial is another invaluable opportunity. It just helps to magnify the music. My goal in the studio is to make the best songs that I can. If I do that, then get a nice look with a television commercial, it’s going to help in a major way; but if the song was wack, I don’t think it would go. There’s a lot of songs that get placements in TV commercials that don’t go.

L+T: What about the other major record you have right now, “Wake Me Up!”with DJ Avicii? Talk about creating that. Did you anticipate it being as massive as it is?
AB: I’m always writing lyrics. Since I came up as a hip-hop artist, I’m steadily creating lyrics to be placed with songs, which I think is a different process from most writers. They may wait until they get to the guitar or the piano. I’ll be on the airplane writing lyrics, coming up with different ideas, different couplets. Some battle rappers come up with punchlines that you can throw in any battle – I’m always doing that, coming up with two hot lines. And the two hot lines I came up with were, “Wake me up when it’s all over/when I’m wiser and I’m older.” I got in the studio with Mike Einziger and Avicii, and took those lines plus a bunch of others that I was able to piece together to make a song in that four hour studio session. I left the studio with an acoustic version; Mike Einziger of Incubus, that’s his guitar. We finished it and a couple days later, Avicii made it into a dance hit. He kept saying, “I want something like Marvin Gaye “Heard It Through The Grapevine.” I obviously didn’t give that to him, but if I had, we probably wouldn’t have had a hit. I knew it was gonna be strong, I didn’t realize it was going to be one of the biggest pop songs of the year. I just thought it would do well in the dance music scene. Of course, in 2013, dance music was pop, so it just worked really well.

L+T: What are you hoping listeners take from Lift Your Spirit?
AB: Well there are different versions of the album. The German version is closest to my desire of what I want from Lift Your Spirit. It’s mainly songs that have a positive tone and are uplifting, except for one song called “Ticking Bomb.” Songs like “Love Is The Answer”: [I was] trying to get mantras that little kids can sing, because one day they’re gonna grow up and be the politicians of the world. “Love Is The Answer” is a different thing to be following than coming up singing other concepts. I’m following in the footsteps of Bob Marley “One Love,” Michael Jakcson “Heal The World,” Marvin Gaye “What’s Going On?” Those are the kind of messages that I want to be able to contribute, songs like, “Hear Today,” and “Lift Your Spirt.” “Can You Do This?” is a fun song for dancing. It definitely has a positive feel on it. Those are the songs that are on both versions. On the US version, there are some songs that I wrote with Harold Lilly that are just really good songs. They don’t necessarily fit the theme of Lift Your Spirit, but they’re just really good songs. Songs like “Chasing,” “The Hand Is Quicker,” and “Fighting Words.” Those are different messages. I’m basically trying to put propaganda into the marketplace. There are other messages going out about how conflicts should be dealt with, I’m trying to suggest a message taught by Mahatma Ghandi, Nelson Mandela and Martin Luther King which is nonviolence and using your words and compassion. I’m trying to fit that into a song that’s interesting enough for people to listen and repeat the lyrics.

Lift Your Spirit is available now.