With the next generation of boxing superstars being knocked off at an alarming rate, one has to wonder who will occupy the throne that Floyd Mayweather currently sits upon once he decides to vacate his lofty position as the biggest star and the greatest boxer of our generation.

The brash, hair-brushing, hip-hop-loving knockout artist from Cleveland, Ohio has been wrecking the competition since turning pro back in 2008. With a record of 23-0 with 19 knockouts, “The Problem” is one of boxing’s fastest rising stars. But it’s not just because of his extraordinary speed and power – Broner’s mouth and antics are swiftly gaining notoriety. And comparisons to boxing’s current pound-for-pound king have become inevitable.

“I’m a huge fan of Floyd Mayweather,” the 22-year-old says about the man whose boxing prowess and undeniable charisma has created the benchmark that every fighter works towards. Some fighters knock out guys. Some boxers have great personalities and a polarizing persona. Few have both.

Broner’s wicked hand speed and boastful ways have put him in a position to become boxing’s next big thing when Mayweather decides to hang the gloves up. But he isn’t oblivious to the situation – he embraces it. “Every time you hear the name Mayweather you hear my name and I’m loving it,” Broner says. “I have to be doing something right. I’m the youngest world champion in the United States and I’m already being compared to one of the greatest in boxing.”

If you’ve seen Broner fight, you can easily draw the parallels. His annihilations of Jason Litzau and Eloy Perez on primetime television were both worthy of raising eyebrows. But his braggadocio and showy mannerisms are what really has caught the boxing world by storm. He bops, brushes his hair, quips hilarious one-liners and dances. His post-fight interviews are chock-full of quotables and have ultimately led to some backlash from boxing purists. However, while some despise his ostentatious antics, others call what he brings to the sport refreshing – especially in a time where the sport is struggling to find its next big star.

“There are a lot of good fighters out there but they just don’t have what I have,” Broner boasts while getting his haircut in his hometown. “I have to stay fresh, fly and flashy at all times,” he deadpans. “I don’t change for the cameras, I do me. That’s what boxing needs – entertainment.”

On July 21st, Broner looks to entertain, once again, when he faces former junior Olympic gold medalist Vicente Escobedo in his hometown on HBO’s Boxing After Dark. But Broner doesn’t so much as bristle at the mention of Escobedo. As a matter of fact, he may be totally overlooking his opponent. But that’s just another of Broner’s personality traits.

“He’s going to be like the last 23 fighters I’ve faced,” Broner says, echoing the, “43 have tried and 43 have failed,” that Mayweather barked before his last fight. “He’s going to come to fight but at the end of the day I don’t watch tape on guys or any of that. I’d rather watch an old Mayweather fight or watch myself. It doesn’t matter what he does, I’m just going to do my job.” 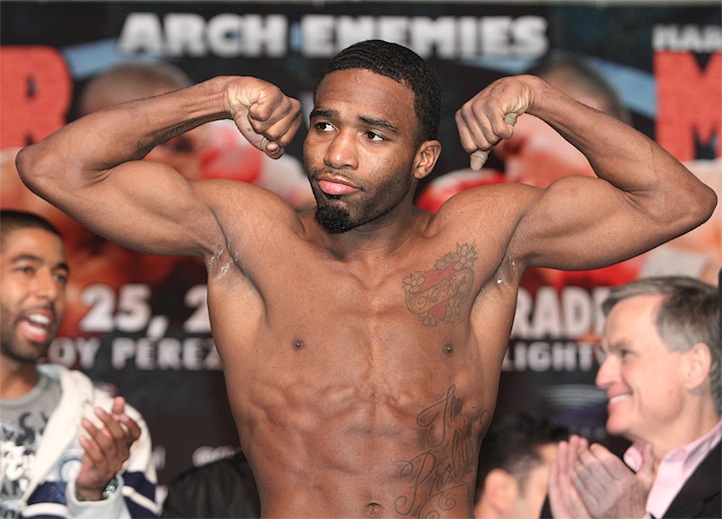 And it’s been Broner’s job since age six when the young boy found himself in a boxing gym and never looked back. “We used to beat up the neighborhood so since I was six this was what I was born to do,” Broner says about his troubled past, where he found himself in quite a few street fights around the same time he made his amateur debut at the tender age of 8. He admits to being a bit of a thug with a nasty boxing pedigree – a lethal combination. But before he got too deep into the street life, Broner realized that his talents were best used inside of the ring.

Like most fighters, his dad helped him find his way to the gym and out of trouble. But unlike many fathers of boxers, Papa Broner doesn’t force the issue with his son. Rather, he’s just his biggest fan. “A lot of boxing dads force them to box. With me, I love boxing so much he really doesn’t have to force me. I always find my way back to the gym. He’s a great and supportive parent and I love him to death,” Broner says of the man that can be seen brushing his son’s hair before and after each bout.

With three mouths to feed at 22, Broner doesn’t have much time to waste. He always looks to get rid of his opponent quickly and begins seeking out his next victim shortly thereafter. Escobedo is no different. “I want to come right back [after this win],” he says, while also citing this will be his last fight at super featherweight, as he’ll be chasing bigger fights at 135 lbs. and up. “This fight should go just like the rest of them. I’ll come out with no bruises and no marks, still looking fresh. I can jump back in the ring in two weeks, it really doesn’t matter to me.”

What does matter is entertaining his fans. As always, Broner will stroll to the ring kicking a few rhymes and looking more like he’s ready to step on stage at a concert rather than engage in an exchange of fisticuffs. If you ask him, a career in hip-hop doesn’t sound too bad. “You can’t box forever! I’m young and I plan on becoming champion and retiring early so I may pursue a career in entertainment,” he says, citing Lil Wayne, Meek Mill, JAY Z and himself as his favorite artists.

Colorful as he is dangerous, Adrien Broner may very well be the adrenaline shot that boxing needs to survive after the Mayweather-Pacquiao era ends.