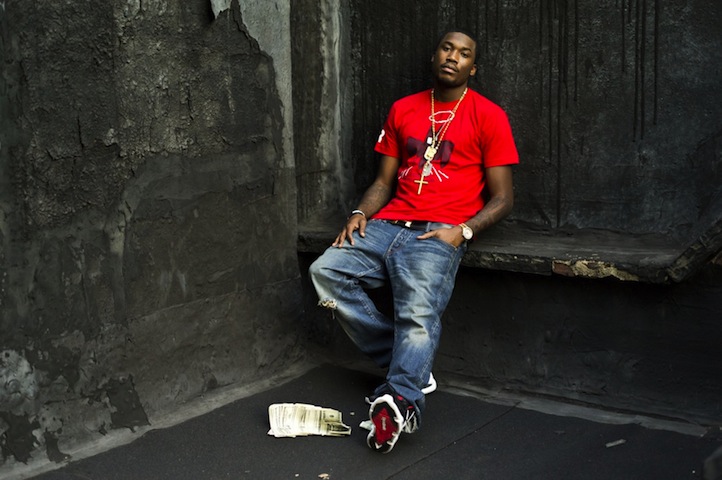 Meek Mill’s rapid ascent into the hip-hop stratosphere was well deserved. The Philly bred rap stalwart shook the scene with his breakout cuts “Tupac Back” and “Ima Boss,” having rappers salivating enough to spin the new classics into their own freestyles. Rick Ross was the added bonus, supporting his MMG affiliate on the cuts. However, it was Meek’s grade A brand of street rap that moved him steadily through the ranks. After that, it was nowhere but up for the artist who is an avid selector of hard beats that match his tough rhymes. With Dreamchasers 2 having dropped this week and his debut album Dreams & Nightmares closing out the summer, Meek Mill talks to Life+Times about success, the streets and now, joining his MMG cohort Wale as part of Roc Nation management.

Life+Times: With Dreamchasers 2 out, what was your mind state going into this one as opposed to the first Dreamchasers?
Meek Mill
: I was just trying to make it bigger than the original one, because the original one was big…it really making my name a nationwide name. It was my first mixtape as a signed artist, and it kind of like stamped me. This mixtape I just tried to go a little bit harder, pick some better beats and bring some more energy into it to make it bigger than the last one.

L+T: What do you suspect will be the “Ima Boss” of this mixtape? The track that will really hit the streets hard.
MM: I don’t know, you know I really like the fans to choose. My favorites though are “Amen,” “A1,” “Racked Up Shawty” with Fabolous and French Montana. But I like to let the fans pick.

L+T: Your success happened quickly once the world really took notice of you, but for you what would you consider to be that one moment where you realized something big was happening?
MM: When you start traveling around the world and you start meeting people and seeing all of the people you looked up to in the hip-hop game and they’re respecting your music and recognizing your music, that’s when I kinda knew it was real.

L+T: With Dreams & Nightmares coming this summer, what’s your process going into it?
MM: Just grindin, really. I’m staying on top of my game. I don’t think anything really changed, just spending more time in the studio grindin’ harder and harder trying to produce the right music and the right album.

L+T: What has being a part of Maybach Music Group really meant to you so far in your career?
MM: It taught me a lot; it gave me a lot of help and plays a big part in my career right now. [Rick] Ross helped me take my career to another level. I always had a buzz in my city, but Ross helped me get noticed nationwide and then worldwide. Working with Wale, Rick Ross, Stalley, and all of those guys just takes a little bit of weight off my shoulders.

L+T: So you’re signed to Roc Nation management…
MM: Yeah, that’s the new deal I put together. Me coming up in this rap game, I was always an underground artist coming up by myself and making all of the moves by myself. And my manager – he’s just like me, we’ve been coming up in the streets by ourselves. So we just decided to partner up with Roc Nation and take things to another level.

L+T: Now that you’re aligned with two of the most important organizations in hip-hop, how do you feel that’s going to define your career?
MM: I think it’s going to take me to the next level. I’ve got Warner Bros. behind me, Maybach Music Group, and Roc Nation; some of the most powerful people in the game. That’s like 80 percent of the game right there. You know, Ca$h Money, they like family. So it’s like you’ve got everyone on your team at one time, and it feels good to have all that behind you at once. It’s like a force that can’t be stopped.

L+T: You mentioned picking some better beats for your debut album. Which producers will you be working with?
MM: I think I’m going to be working with some of the same producers like Jahlil Beats, Cardiak, All Star, Key Wayne, Young Jerz, and those type of guys. They’ve been presenting me with new music. Now I’m at this level, I’m able to run into more different producers like Just Blaze and Pharrell and those types of guys, so hopefully we’ll end up working together soon.

L+T: What about collaborations with other artists?
MM: You know me; I like collaborating with artists I’m cool with already. So all of the artists you see me really kicking it with and building friendships with, they might be the people that’ll end up on my album. I haven’t made any final decisions yet.

L+T: Because of your success, do you feel like you’re bringing the street rap back to Hip-Hop? It’s been gone for a while.
MM: Yeah, street rap’s kinda missing. I think people just leave me an open lane to do it on my own, you know what I mean? That makes it more fun. French [Montana] is also bringing street rap back, he’s a street rapper. There’s a few other rappers that are doing street rap, but a lot of new rappers ain’t really on that. That’s where I come from; I’m not really good at rapping about that other stuff because that’s not where I come from. Maybe traveling the world, I’ll be able to see more and participate in some type of way. But the streets are where I’m at right now.

L+T: If you weren’t here now, where do you think you would be?
MM: Ain’t no telling where I would be. I’d be doing something, though. I’d be somewhere making some money.