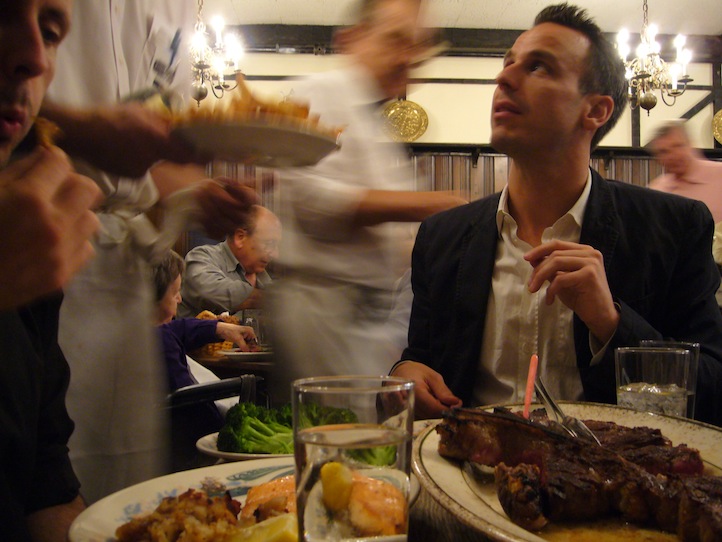 He can make the best eggs (or so he says), listens to The Avett Brothers on high rotation (as well as whatever hip-hop his wife feels like blasting), and has impeccable taste in clothes (but if you ask him, he’d say he needs to up the ante in his wardrobe). Who is he? He’s Adam Rapoport, the Editor-In-Chief of Bon Appétit Magazine, also known as one of the coolest dudes around. A former fashion editor, Rapoport has been steering the ship at perhaps the most influential culinary publications for the past few years – bringing a revived sense of youth and attainability to the years-old magazine. We picked his brain because, well, it’s a fun one to probe. Our conversation, below.

Life+Times; You’re the Editor in Chief of Bon Appétit magazine, a position you’ve held for the past few years. Your background is in the fashion domain – holding the spot as GQ’s Style Editor. How and why did this transition take place?
Adam Rapoport: Back when I was a youngster—like way back, in 1994—I moved to New York from DC, hoping to become a food writer. I didn’t actually know much about restaurants and chefs and all that, but a good friend noticed that whenever I talked about food, I’d get all excited and animated. And as a writer, you’re always taught to write about what you love. So, I said, Alright—I’m gonna be a food writer. Obviously, it wasn’t as easy as all that. But I was lucky enough to start volunteering at the James Beard Foundation, which led to a full-time job in their publications office. Three years later I was hired as the restaurant editor at Time Out New York, in 1997. Three years after that I made the move to GQ, where I continued to write about food, but I focused mostly on, you know the important things—shoes, hair, how narrow a guy’s tie should be. Subjects I’ve always loved. Man, that’s a long answer.

L+T: From May 9th through the 12th, the city of sin will host Vegas Uncork’d by Bon Appétit – the annual food festival that’s been happening for seven years. Can you tell us a little bit about this? What’s the importance of this festival?
AR: This might sound obvious, but what’s cool about Vegas Uncork’d is that you’re in Vegas. So it’s about a lot more than just attending a food festival. It means you can hang out by the pool, sneak in a round of golf, gamble, get into some trouble late night, and still have time to attend a cooking demo or a wine tasting or a special dinner by a big-name chef. You can pick and choose what it is you want to do, and tailor your day around the events.

L+T: The festival is going to bring out some serious heavyweights in the culinary world – who can we expect to be there?
AR: Who can’t you expect! Nobu Matsuhisa, Bobby Flay, Jean-Georges Vongerichten, Gordon Ramsay. If you’re a chef and you’re worth your sea salt, chances are you’ve got a restaurant in Vegas. Any chef who does will be at Vegas Uncork’d by Bon Appétit.

L+T: If you had to choose five of your favorite restaurants in five different cities – what would they be and why?
AR: In no particular order:

NYC—Roberta’s: The tastiest, coolest, most fun restaurant in the country. They play the Beastie Boys real loud and serve Bud in a can. That’s basically all I can ask for.

LA—Osteria Mozza: Mario Batali‘s joint. I like to sit at the marble mozzarella bar and watch the chefs do their thing, while giving my good friend, David Rosoff, the manager, a hard time because his tie knot is too big.

San Francisco—La Taqueria: I went to school at Berkeley and quickly learned that there is nothing better on earth than a carnitas burrito. La Taqueria makes the best in the Mission.

Chicago—My snooty restaurant critic Andrew Knowlton will give me hell for saying this, but I love lunch at the Ralph Lauren restaurant. Club sandwich, fries, bloody mary. Done.

Charleston, SC—Husk: Sean Brock‘s place. After listening to the hype for the past year and a half, I finally got there recently. Damn, it’s good.

L+T: Are you a good cook? If you were staying home on a Saturday night and were to prepare a relatively easy meal that’s also cost effective – what would it be?
AR: Well, tonight I’m making papardelle (pasta is cheap!) with wild mushrooms sauteed with olive oil, garlic and thyme, and then finished with a healthy amount of butter and pasta water, so it gets all creamy and emulsified. Green salad with shallot vinaigrette. A bottle or two of well-chilled white wine.

L+T: You live in NYC – take my through your ultimate day in regards to food (breakfast, lunch, dinner, snacks, drinks etc…).
AR: I start every morning with an iced redeye at Café Grumpy in Chelsea (like the one in Girls, except they call it Grumpy’s, with the apostrophe “s”for some reason). Lunch with a friend outside at Bar Pitti. I usually keep it pretty simple and light,. Dinner with my wife, and maybe another couple, at Minetta Tavern. Definitely getting the Black Label burger—caramelized onions on the side (because the chef, Riad Nasr, told me to)—and the coconut cake for dessert.

L+T: Do you have any specialty recipes that you wont give away the secrets to? If so – keep the secrets to yourself, but what are your famous dishes.
AR: The first food piece I ever wrote for GQ was about how to make perfect scrambled eggs—nothing but eggs, butter and salt. The key is to keep the heat low, crack the eggs directly into the non-stick skillet and to gently (and infrequently) massage the eggs, so the yolks stay yellow and the whites stay white. And don’t overcook ’em. Eggs and like steak—you want them medium rare.

L+T: Besides having good taste in food – you’re also one hell of a dapper dude. If I were to peek inside your closet, what would I find?
AR: You’d find that I need to go shopping. I’m trying to get out of the habit of wearing jeans with a suit jacket to work every day. Either I need to buy more full-on suits, or I need to get some trousers that aren’t jeans. I’m all for a man having a “uniform,” but I’m getting tired of mine. Time to change it up.

L+T: Music music music. What’s your taste in music? Any new bands that you’re listening to these days? If so, who are they.
AR: I’m listening to lots and lots of Avett Brothers. That, and whatever hip-hop my wife tells me to listen to. She’s the cool one in the relationship.