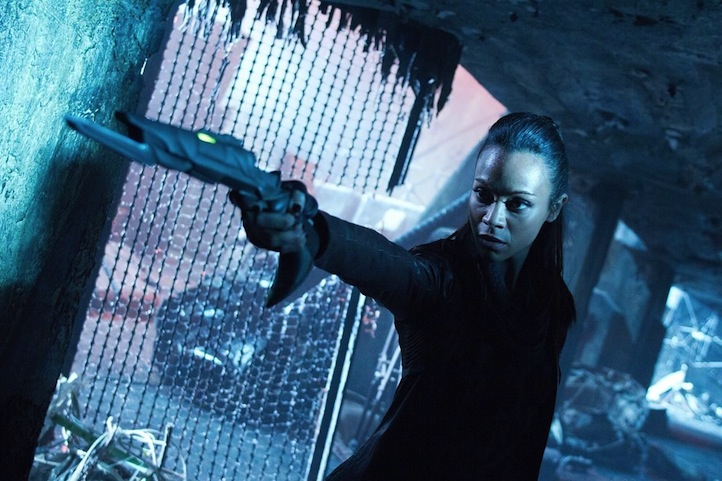 While Zoe Saldana’s career has been in full effect for quite some time, the last couple of years have really sealed her fate as a Hollywood maven. The actor has nudged her way right into a series of badass roles – from being pixelated in blue for Avatar to bringing tons of guns in Colombiana. It’s a perfect fit for the New York by way of New Jersey native. Saldana possesses that je ne sais quoi that allows her to somehow emit femininity while still wielding weapons. As she reprises her role of Nyota Uhura for Star Trek Into Darkness, Zoe discusses a few of her favorite things. She also discusses her message in Allure magazine that a family defies gender. Perhaps her greatest role in Hollywood is simply being herself.

Life+Times: Hey Zoe.
Zoe Saldana: Hi, how are you?

L+T: So we’re both from New Jersey…
ZS: Wow! Here we go! I was actually only born there. My family moved back to New York, which is where my mom grew up, when I was just like, three-months-old. I wish I knew more about New Jersey, trust me!

L+T: So you’re reprising your role again as Nyota for Star Trek Into Darkness. What changed with your character this time around?
ZS: Well she’s much more comfortable in her own skin and also feels comfortable in her title. Her relationship with Spock has definitely evolved a lot since the last time you saw them.

L+T: So does it lean at all on the series or has it taken its own dimension?
ZS: It leans on the series a lot but it still has an edge. [Director] J.J. [Abrams] and a few more writers really used up well the space that they have to improvise and be creative and be innovative.

L+T: Was it cool taking on this character who meant so much to television?
ZS: Yes! Yes it was. Especially after meeting [the original Uhura] Nichelle Nichols, and she was so happy and blessing the transition from her to me. She passed the baton very gracefully, and I was very honored by that.

L+T: So were you a Trekkie, or did you become one after this?
ZS: No, I wasn’t growing up. I’m definitely a lover of Star Trek now but, I still don’t watch the show. I’ve never seen any of the show. But my mom watched, so she was a huge founder of information for me when I was putting it together in the first installment.

L+T: Have you had any creepy Trekkies come up to you like, “Hey!” Because you know, they’re in a league of their own.
ZS: No, I haven’t! And I feel left out now, because some of the boys have had interesting little stories! But so far – or maybe because I’m a weirdo myself – so I’m not stricken by something unusual like that as like a very passionate that.

L+T: You don’t want to send a warning shot out like that though, for Trekkies to come up to you!
ZS: No that’s true! Oh gosh!

L+T: So you have a lot of projects coming up and they’re all so diverse. How do you go about choosing what you’re working on and what you pick?
ZS: I just follow my heart, and then I go after the film that I want to. And if I’m able to get the part then I get it, and if I don’t, I’m a little bummed for a minute. But then I get up and I move on. Literally, life can be that simple, you know?

L+T: You’ve been doing this for a while now, but you became a superstar over the past few years. What would you kind of say was that turning point for you? Was it a film, was it a moment for you that you were like, “Oh, wow! I’m here!”
ZS: I think Star Trek did something. But then Avatar, the impact that Avatar had was very amazing and truly humbling. What helped me to not lose total anonymity was the fact my face was sort of concealed in the movie…drastically. So that still gives me the ability to go out and have a little bit of a normal life before someone comes and says, “Hey, you were that blue girl in Avatar!” [Laughs]

L+T: Is it hard walking the streets now?
ZS: Sometimes. It depends on the city, though. Because some places I can go and I just blend right in and it’s amazing when that happens. 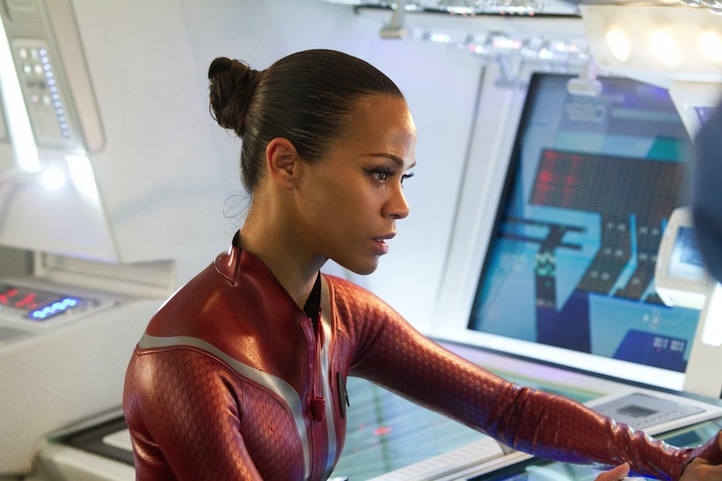 L+T: So how’s L.A. living?
ZS: It’s different from New York, but it’s not as bad. I’m not going to be one of those New Yorkers that’s hating on L.A. I’m not going to do that anymore. I’m done with that phase. But I like it! But also, I wouldn’t notice the difference as long as my sisters are with me. All three of us live in L.A. so no matter where we live, we’re going to acclimate.

L+T: Are you going to be working on stuff together?
ZS: Yes! Yes, which is great.

L+T: Can you reveal any of it or no?
ZS: No unfortunately, but we are working together. That’s always been our dream, to be able to work together.

L+T: Scared of…?
ZS: Just the challenge. I’m always a bit fearful. I always go in with trepidation into a new territory, because you want to solve it, you want to crack it. You want to do your research and become your character and also enjoy, so getting to a place where you feel comfortable…it takes some training steps.

L+T: Do you think you’ll be doing any more TV stuff?
ZS: Yeah, in the future. Why not?

L+T: What would you say were some of your extravagant purchases or things that you were like, “You know what, let me throw some money on this and celebrate!”
ZS: Shoes. And coats. I like collecting coats. I guess now that I’m living in L.A., I get winter withdrawals, so I collect really nice jackets and leather jackets as well. Shoes are something that I really like, also because it’s really hard to find comfortable, amazing, good-looking shoes. So when you do find them, you buy them in bulk, and by the shades.

L+T: Favorite designer for shoes?
ZS: Lanvin, their flats are really adorable and super comfortable. Let me see what else. I always do the Louboutins, they’re really good. I’m a huge sucker for Rag & Bone.

L+T: Do you have a closet for all of your shoes?
ZS: I do. I really do, and then every now and then if I’m coming in really quickly to find something to wear, I just go, “Thank you so much!” to the universe, you know? The shoes make me really happy.

L+T: So do you think there’s going to be another Star Trek film after this one?
ZS: I hope so. I mean I can only hope we do come back. I would love to come back, and I would love for every cast member to be in it.

L+T: So the internet has been buzzing about your interview with Allure magazine…
ZS: Oh, the Allure interview. What about it?

L+T: There are so many questions that people are having. Many mens’ hearts are breaking because they think you’re having babies with women and not them. What is the explanation kind of behind all of that? You said it so casually, which I thought was amazing, and it’s causing quite a stir.
ZS: Because a person’s sexual orientation should be that casual and also that private, you know? It’s not something that we need to stop like, “Oh my God, he’s gay!” or, “Oh my God, she’s…” We don’t need to label anything, and as of now, I’ve been attracted to men, but if one day I wake up and I want to go in a different direction, I will do that because it is my life, therefore those are my decisions. That’s a statement that I strongly, strongly stand firmly on, you know?

L+T: Thank you for clearing that up. I really appreciate that.
ZS: Thank you.

L+T: I admire your “balls” so to speak.
ZS: Oh, are you kidding me? I’m not on this earth to live for others; I can only live for me. If I’m only here for 80 years, I’m lucky. I am not going to spend more than half of my life trying to get approval by other people. Screw that. I need to be happy first and foremost. If we all did that, there’d be a lot more happy people on Earth, therefore we would be a little more flexible with each other, which is what we need to be.

L+T: That’s Jersey talking right there, you know that right?
ZS: I love it!