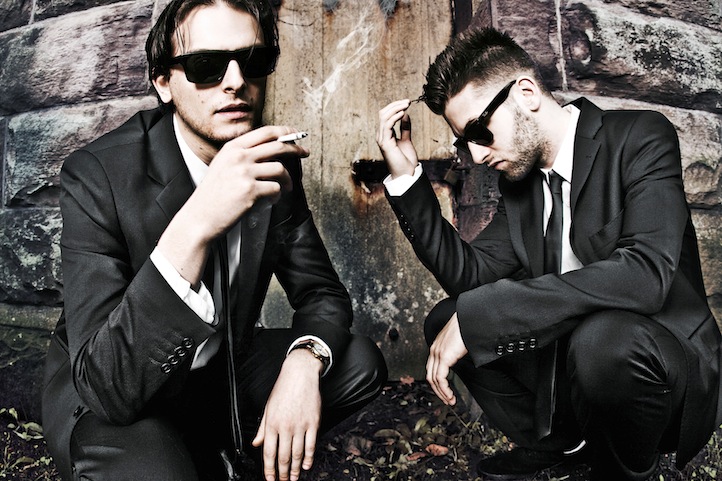 Zach “Hooks” Rapp-Rovan and Dylan “DC” Mamid of the Toronto based DJ/producer duo, Zeds Dead, took the stage at last weekend’s Electric Zoo Music Festival. Though unsigned, the Toronto based duo’s matchless versatility showcased in their ability to combine their hip hop background with multiple layers of electronic dance music and even elements of rock proves that is to no surprise that their popularity continues to arise among a broad range of music lovers. Life + Times caught up with the duo after their set to discuss the correlation their creativity and musical background have in regards to producing a record and gives us a snippet of what the future holds for their next project.

Life + Times: I don’t want to assume that you guys always agree, even though you always work together. Tell me about your creative process as a team.
Dylan: It’s true we don’t always agree. I think we both work best in our own environments. We both taught ourselves how to produce. That’s kind of a personal experience in that light. We work towards a finishing product and decide what we like and what we don’t like to try to finish off the tracks we both feel strongly about.
Zach: I think one of the best things in our partnership is that we really critique each other. If it [a song] ends up coming out, it means we both agreed on it.
Dylan: It’s good to have the Devil’s advocate.
Zach: Sometimes it’s extremely frustrating. It pays off in the end.

L+T: That makes sense. You have done remixes for Foo Fighters, Radiohead and other artists. Are there any musicians outside of electronic dance music and hip-hop that you would want to collaborate with?
Zach: We are open to whatever. Essentially, they’ll [artists] send us something and we decide if we like it enough to remix it or collaborate on it. Yeah, lots of bands. We started out just remixing stuff, now we have the opportunity to work with a lot of people. It’s really cool. It’s track by track, they’ll send us something. It might be something you wouldn’t expect, like a band we didn’t even like and they made something that had really good parts in it. We’ll really like the guitar or the vocals and decide to make it a track.
Dylan: I’d be down to work with any of those artists you [Life+Times] listed before, like officially.
Zach: Our track with Radiohead by the way made it in the Step Up Revolution movie. It’s pretty cool.
Dylan: Yeah, there’s a whole dance routine to it.
Zach: It was the first time we got into a big Hollywood movie like that. I went to the theater and saw it in 3D and shit.

L+T: Wow! Now, I feel compelled to see it just to see what you are talking about. So, you both do a little bit of everything. There’s a lot of versatility in your sets. You incorporate dubstep, electro house, hip-hop and everything in between, is there a certain genre you prefer over another genre in regards to production of a track?
Dylan: I don’t think I can really say I prefer one genre over another.
Zach: The ones you listed are definitely our favorites; plus, dancehall. We don’t really go into the studio with anything in our heads necessarily. We might feel inspired by a song we heard and we might want to remix that song. It’s day by day. I can’t really say.
Dylan: You never know, like sometimes I surprise myself with what I find interesting. There might be some weird metal track; I don’t really listen to metal that much, but if I hear something in it and think, ‘wow, this is fucking awesome!’ I’ll try it.

L+T: That was actually my next question in regards to creativeness. Do you find that inspiration while working in the studio together or separately?
Zach: We get in the studio together, but we also work on stuff separately. We pass it back and forth.
Dylan: We both have home studios also.
Zach: I won’t send him something until it’s at a point I feel alright sending it to him positively. Then, I’ll hear what he has to say about it.

L+T: You have collaborated with Omar Linx (rapper) on multiple projects. How did you meet?
Zach: We used to make straight hip-hop beats. We were introduced through a mutual friend and he [Omar] was just killing it. Then, we just started collaborating. He would start coming over to our places and we started doing tracks. He’s really versatile.
Dylan: We used to work with a lot of local rappers. With Omar, we always saw a lot of potential in each other. He got excited about our beats and we got excited about his rapping as a lyricist. As we started to change our style, he was very open to doing different shit. We just vibed off of each other.

L+T: Are there any additional rappers you would want to work with on a track or remix?
Zach: I like the old school. For the most part, I don’t understand why these guys, except for JAY Z and Busta, are kind of getting slept or they’re not really choosing ill beats that these new guys are choosing. They’re still ill. I want to hear new shit.

L+T: Are there any projects you are currently working on that we don’t know of yet?
Zach: The thing is, we don’t like talking about projects while they’re in their prime state because you never know as artists you may feel good about something one day, but then hate it the next day. I don’t like to get people all excited.
Dylan: Also, when you decide your music is done, it doesn’t mean it’s gonna necessarily come out for a long time. Things are constantly changing. We have a couple of remixes coming out. We are looking to get the next album out by the fall.