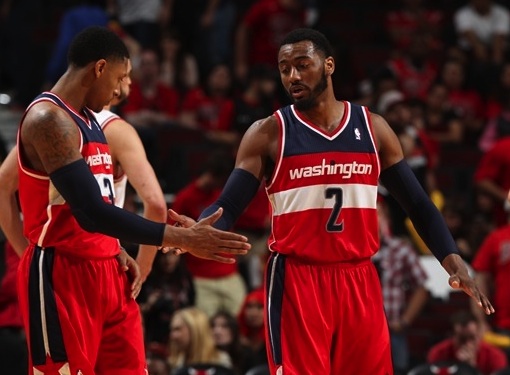 Far more than regular season accomplishments, the NBA playoffs are where young players truly earn their stripes. Especially for guards, poise to make the right decisions, courage to take (and make) shots, and ability to lead their teams in the face of adversity and high stakes are the ultimate barometers of maturity and growth.

Wall, the first overall pick in the 2010 draft, and Beal, the third overall pick in the 2012 draft, have battled various injuries in their short careers. But both were healthy as the Wizards matched up against the Chicago Bulls in the first round of the playoffs and proved to be major difference-makers, improving on their regular season play while grinding through the ups-and-downs that come with playoff basketball. 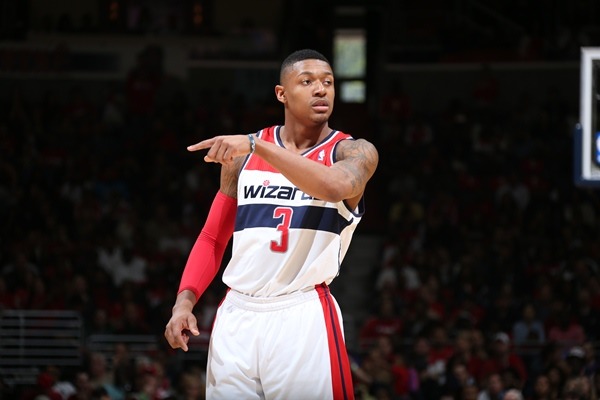 In five games against the Bulls, Beal averaged 19.8 points, 4.6 rebounds and 4.2 assists, shooting 44 percent from the field and 45 percent from three – all upgrades from the regular season. Wall’s 18.8 points, 6.8 assists and  4.6 rebounds weren’t numerical improvements, but his growth was apparent beyond the stat sheet. His turnovers were cut nearly in half and his better decisions – controlling the tempo, making the right reads and proper kick-outs – were what mattered most.

“They were great,” Wizards coach Randy Wittman said after a 103-92 Game 1 victory over the Bulls, who was pleased with his backcourt’s poise after the first game of their first playoff series. “I thought focus-wise, that’s what you really mean. You don’t look at 3-for-11 or 4-for-14 [shooting], you never do. If they’re the right shots and good shots – guys are going to make and miss shots – I want them taking those shots. But the focus that they kept through that was the key. Your first time out, you don’t know. I didn’t know how either one of them was gonna react until you get them in that setting. Both of those guys I sat down before the first game giving them an understanding of, ‘You might think you’re playing the worst basketball you’ve ever played and then all of a sudden it’s gonna turn on if you stay in the game.’”

“It’s very intense,” Wall said after his first playoff game. “I’ve watched and have been to a couple games but it’s a lot different when you’re on the court. There was one second when I couldn’t really breathe going up and down the court. Just making sure you’re sticking with your pace and doing what you want to [is important].” Beal to make a similar adjustment: I was kind of nervous at first, but that went away within two seconds of the tip off. The atmosphere was great, the intensity definitely increased and it was definitely what I pictured.”

Wall and Beal both struggled shooting that night, but played through it to finish with 16 points, six assists and six rebounds, and 13 points and seven assists, respectively. Most importantly, they got the win. 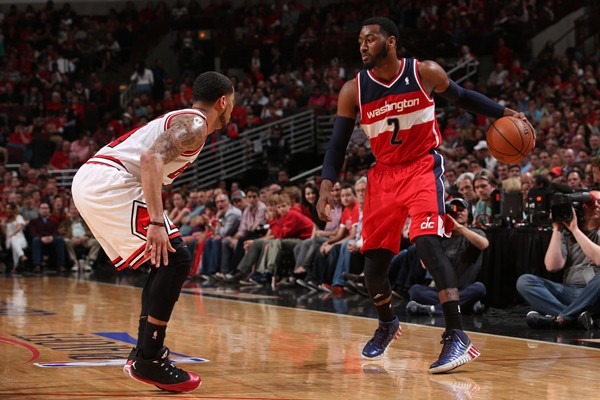 “[Some] guys are immature on this team,” added Wall. “This is our first experience of not really getting rattled and sticking with the team concepts. We didn’t try to go do it one on one like we probably would have earlier in the season.” Development and advancement isn’t a mistake-free process, obviously, so round 2 versus the Pacers has presented another set of challenges for the Wizards and Wall especially has struggled to work through. His points are down, his turnovers up and he’s shooting just 31 percent; Beal, on the other hand, has managed to stay consistent.

Still, this season was the Wizards’ first with a winning record – and first time making the playoffs – since 2008. They’ve gone through four head coaches since then. Wittman, in his third season with Washington, has seen the maturation happen before his eyes. “Sometimes when you’re a talented young player in this league, you think it has to be done offensively, and we’ve preached it all year long that we’ve got to learn to win games when we don’t have our A-game. That can be an individual or a team. With Brad and John not shooting particularly well, they never lost their aggression. They stayed focused. That’s growth for these guys.”

The growth has been a work-in-progress all season, and the team’s turnaround has been a long time coming.  Now that it’s happened, the future is bright and the ceiling on how good the Wall-Beal dynamo can be is still yet to be determined. Wall is 6-foot-4 and 23 years old; Beal is 6-foot-3 and 20 years old. Both are phenomenal, world-class athletes whose athleticism and length make them threats on both sides of the ball, especially defensively where they play passing lanes, rebound, contest shots, cover ground and defend either guard position.

On offense they’re great compliments to each other. The 2013-2014 campaign was Wall’s best of his four years, averaging career-highs in points, assists, and assist-turnover ratio. While his shooting is still his weakness – he’s under 40 percent from everywhere outside of eight feet – he made 108 threes this regular season on 35 percent shooting after making just 49 total in his first three years combined. Wall is best penetrating, and his ability to get into the paint, go one-on-one or play pick-and-roll works well with Beal’s game, which is predicated on spotting up, coming off screens and moving without the ball.

Both players still have work to do, but the Wizards have plenty to build on with Wall and Beal setting the tone.