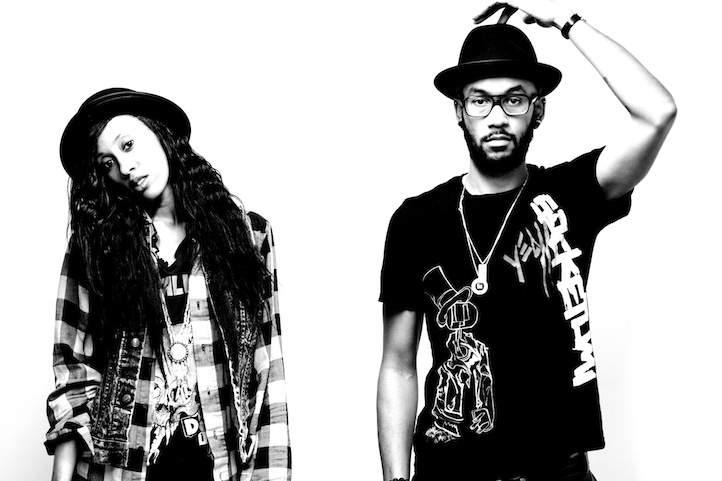 Life + Times: J*Davey’s sound is like a bubbling, cauldron of genres. Who brings what to the table?
Miss Jack Davey: I grew up listening to a lot of jazz, R&B and hip-hop. Brook was into New Wave and a lot of other types of music. We just naturally threw everything into the pot and started working.

L+T: Does it get frustrating when people try to label your sound?
JD: It doesn’t frustrate us. We understand that people have all been conditioned to embrace categories. What we try to do with our sound is abandon that archaic thought process. We strive to get people to embrace a new frame of mind.

L+T: Was there a time when you first started where people simply didn’t get it?
Brook D’Leau: Most thought the music was really dark, too quirky, too weird…
JD: People hated it! It wasn’t structured. It took about three years before people started to catch on.
B: We don’t rely on other people to understand what we do. We just do what we do and people catch up.

L+T: Is there such a thing as being too far ahead of the curve?
JD: Somebody said “Don’t outgrow your audience because they are not as far advanced as you are.” I think that’s bullshit. You have to raise the bar and let people come to your level instead of dumbing it down because you don’t think they will be ready.
B: To be honest with you, it’s never a great idea financially to make music that’s ahead of its time. You don’t see the immediate benefit of that.

L+T: The songwriting is incredible but often plays a backseat to the production. What inspires songs like “Raincheck?”
JD: I draw inspiration from life, love and sex. I’m always listening to what people say and restructuring it in my mind to fit with Brook’s music.

L+T: How amazing is it to count Prince and ?uestlove as both fans and supporters?
JD: It’s mind blowing. We grew up idolizing Prince. When you get to the point that he knows who you are, at first you are kind of awestruck. But then you get to know him and he’s an artist just like us.
B: We realized that we have common threads. The things we heard in his music that we like is what we incorporate into our sound. He told us that he likes what we do because we are similar.
J: We had friends who knew ?uestlove and put him on to us. He’s like the Godfather of our musical generation. He’s really taken a lot of us under his wing. I can’t say enough about him. If we go to Philly, we’d record at his studio. If we are in New York, we would stay at his place. He’s our big brother.

L+T: What happened with the Warner Bros. deal?
B: We signed with the optimistic hope of a major label understanding what we did, our fan base and having the fortitude to put something out of that nature. Over the course of four years, we went through the gambit of working with different producers, writers, which initially wasn’t our ideal scenario
J: We were willing to play their game but still keep our integrity and not stray too far from who we are as artists. It’s hard to meet in the middle and do that dance gracefully. It was in our best interest to walk away from it. We recorded three different albums, turned them in and they all got rejected. We just weren’t getting anywhere. It’s like you meet a girl, get her number, you call and she never picks up her phone. After the third time, what are you going to do? Keep calling her or say “Yo, she’s just not that into me.”

L+T: Did you get to keep the albums you recorded?
B: Yeah, we got to walk away with all of the recorded material.

L+T: A J*Davey performance is an intimate experience that is never the same twice. Do you rehearse?
JD: We rehearse a setlist but we don’t know what’s going to happen until we get on stage. That’s the best part of the live show. It has to seem genuine. The best performers are in their most raw state when they are sweating, don’t look sexy and may hit a few raw notes, but they are giving you everything.
B: We’re unafraid of making mistakes. Oftentimes the things that you don’t plan are what make the show special. We try to leave some kind of element of surprise.

L+T: With New Designer Drug coming this summer, what should people expect with the new album?
B: It’s a more mature sound. We took our time crafting these songs and they’ve withstood the test of time over the last few years. Of course you want people to enjoy what you do but we make this music as a sincere form of expression. Some people will never get it but this is just who we are. We aren’t apologetic for anything we put out. (J*Davey)