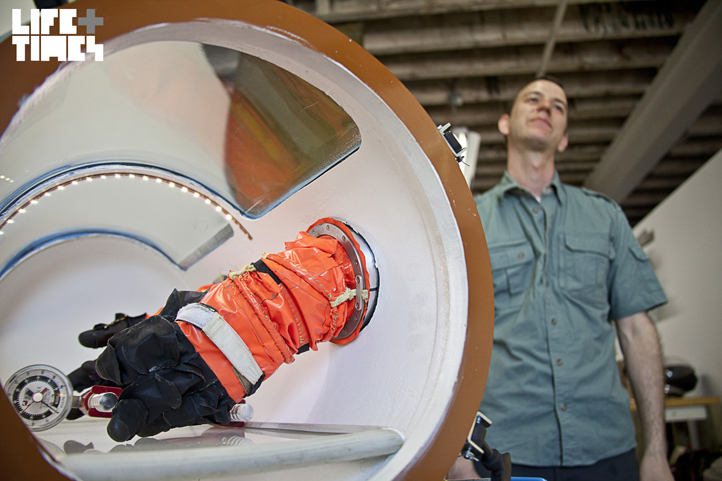 Tucked away in his Brooklyn studio, Ted Southern tinkers away at his latest space glove model with a half-solved Rubik’s cube, a yellow and black space suit and his new puppy, Milo, nearby. Southern has a history of working with heavenly bodies. He spent nine years designing the wings for the Victoria’s Secret’s angels and later, creating spacesuits for NASA. Life + Times caught up with the engineer extraordinaire to talk about his recent change in clientele and his obsession with hands.

Life + Times: How did this all begin?
Ted Southern: In college at University of Puget Sound, I actually got my Bachelor’s degree in the French horn, but was constructing props and costumes on the side. Then for an art grant, I made three suits of body armor and realized that that was what I was interested in. I just really enjoyed the experience, especially the multicultural aspect of exploring samurai and Tibetan armor in relation to European armor; it was all really fascinating to me. At that point I knew that I could do this all the time and that I should do this all the time and not be a classical musician, which was a really good life choice. 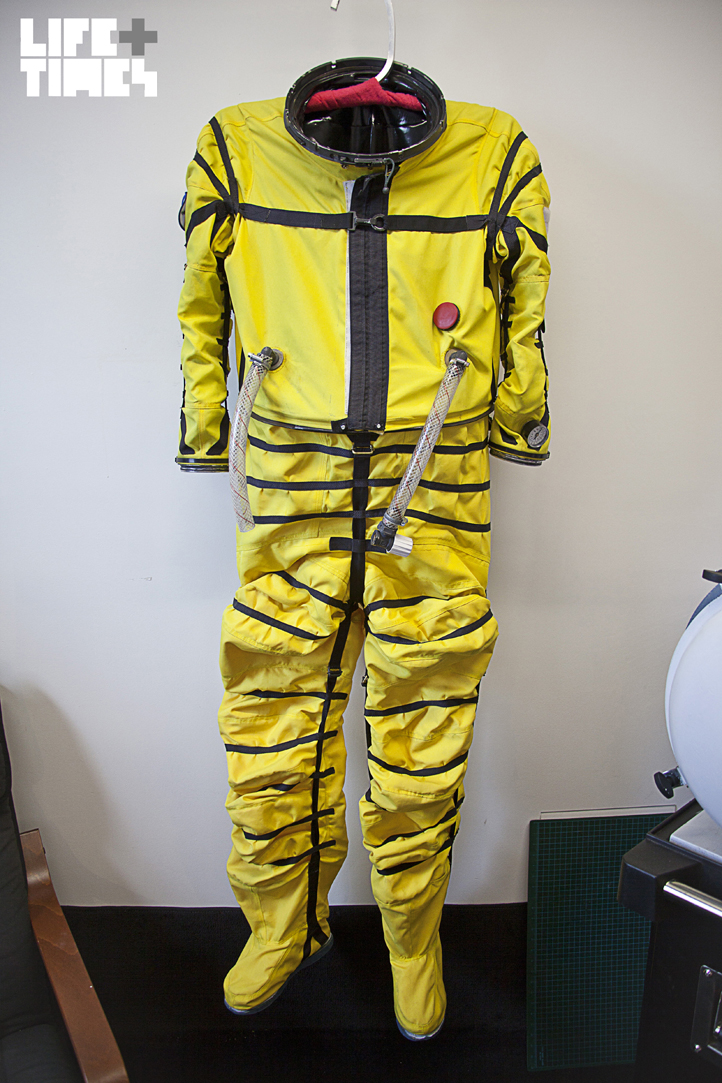 L+T: How did costume and prop design turn into a nine year stint with Victoria’s Secret?
TS: My general interest is in extending the ability of the human body. I have an obsession with hands and how they function and so many of the props that I have been commissioned to work on through Martin Izquierdo Studio are gloves or apparatuses that have to do with arms or hands. Wings are essentially like hands—another extension of the body. I seem to have an ability and proclivity for creating wearable structures so working with the Victoria’s Secret Angel wings just made sense.

L+T: What’s it like to work with those very famous and very leggy celestial beings?
TS: It’s extremely exciting to work with the girls. It’s all very glamorous, but I’m not allowed to say anything bad because that blew up in my face last time.

L+T: What were your favorite pair of wings to work on?
TS: There was one year that Heidi Klum had these magnificent snowflake wings and they had this string that she pulled at the bottom of the runway that released the wings into a big star and everyone gasped. I was backstage so I didn’t get to see it, but I knew it was happening because I could hear everyone in the audience scream, “Oh!” Heidi is the queen. Her wings are always amazing. 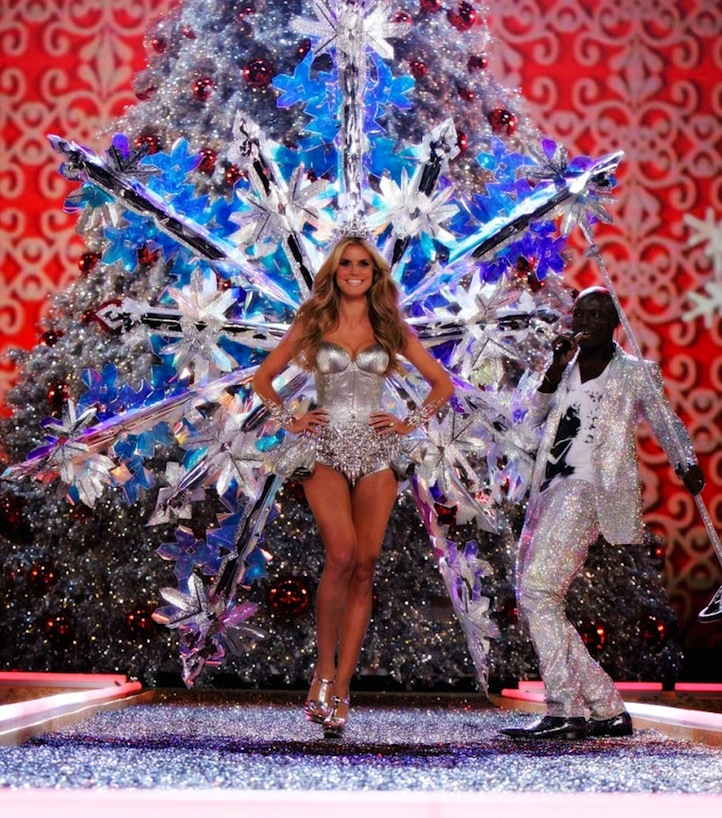 L+T: What about for the theater? What was your favorite piece to work on?
TS: My favorite piece ever were these giant gloves that I made through Martin Izquierdo Studio for the national opera in Washington DC. Again, my hand obsession is pretty clear. They were spring loaded, open and full-extension and had articulations over the fingers. When the singer closed his hands the larger pieces would extend so he could actually use them. It was pretty awesome.

L+T: You’ve had to spend a lot of time at musicals, do you actually enjoy them?
TS: Well I like the opera, musicals not so much, but clearly I’m exposed to them all the time. I remember when I worked on the set for the Little Mermaid in Denver before it opened on Broadway, I’d be back stage and could hear King Triton scream “Ariel!” in the same pitch night after night. It killed me! 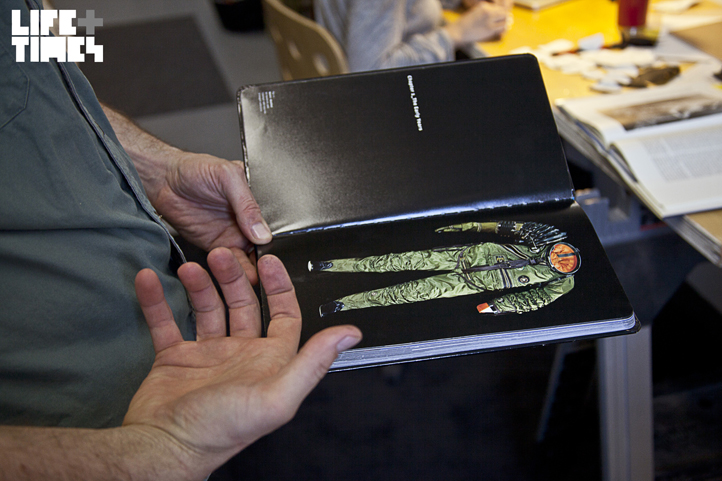 L+T: So how exactly does one go from designing Broadway costumes and Victoria’s Secret Angel wings to NASA gloves and spacesuits?
TS: Well I used to joke with people and say that I wanted to make body armor for a living. In 2007 I entered the NASA “Astronaut Glove Challenge” for my master’s thesis at Pratt University. I didn’t end up placing and my gloves didn’t even qualify, but it was where I met my current partner, Nikolay Moiseev. He asked me to be his partner for the second competition in 2009 where we ended up placing. We outperformed NASA’s current technology and won money, so that was pretty cool. From that, our current contract with NASA was born.

L+T: It’s every little kid’s dream to meet an astronaut, what was that like for you? Live up to your expectations?
TS: It was a huge, huge deal for me! We got to go to the Johnson Space Center in April last year and have a couple dozen astronauts and NASA engineers test out our gloves. I can’t lie, it was pretty surreal.

L+T: What has it been like to go from working with models to astronauts?
TS: The transition honestly made perfect sense to me. Even though now I’m working for a very different customer than before, in the end I don’t think of the jobs as being that drastically different. You have a challenge that you’re trying to overcome for both, it just so happens to be a much nicer budget and time allowance when working for NASA! 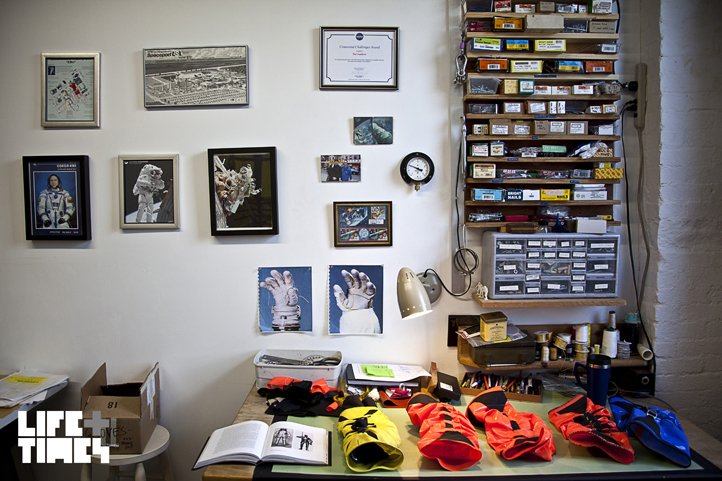 L+T: Have you always been a secret science nerd?
TS: No, well not really. I have a liberal arts background so I’ve always had exposure to science, but never excelled in it and never pursued it. It was always the technical aspect that kept my interest, whether that be through prop and costume work or designing astronaut gloves and space suits.

L+T: So what’s next?
TS: I’m actually in the initial stages of designing a Tsunami protection suit for this guy from the Dominican Republic, which I’m very curious about. Nik and I are also working on a full space suit for suborbital flight and I’m working with a woman to design costumes for Carnival in Rio next year! Oh and I just got a call from Victoria’s Secret the other day—they want me to work at their show again this year! I obviously said yes. 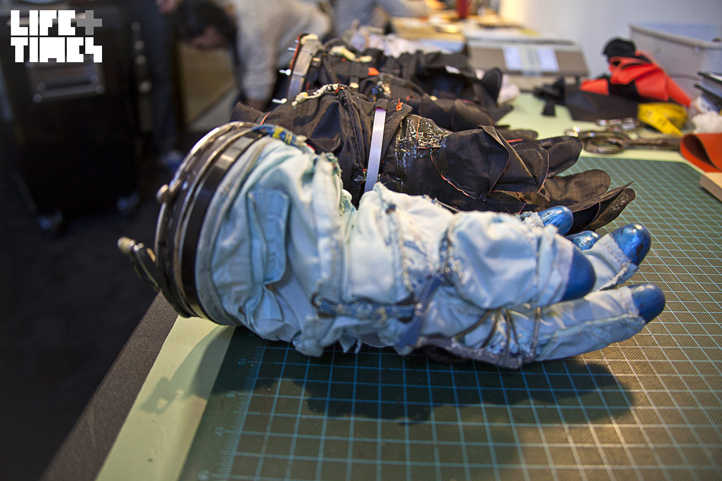