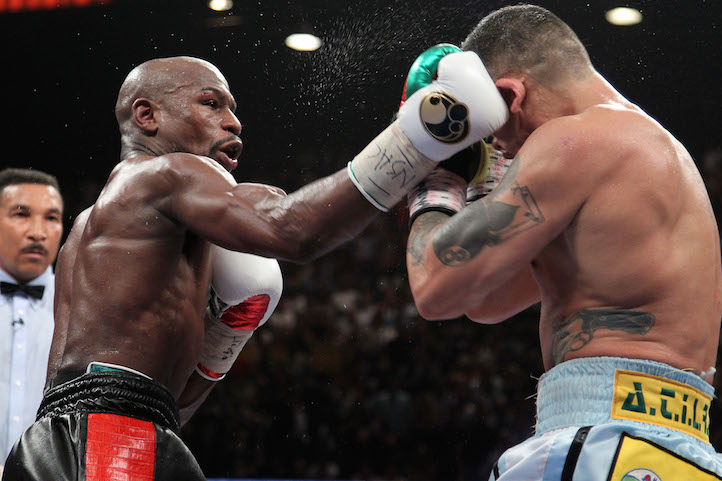 That quote from Ron Shelton’s 1992 film was a lot longer, but you get the point.

Marcos Maidana had no business giving Floyd Mayweather a run for his moniker (“Money”) when the two faced off in front of 16,268 rowdy fans at the MGM Grand Garden Arena in Las Vegas, NV. The unbeaten Mayweather had vanquished just about every threat in boxing – except a certain Filipino that will remain unnamed – and Maidana was given virtually no chance by anyone to score the upset. But the determined Argentinean gave the pound for pound king all he could handle for 12 rounds and won over the fans despite losing a majority decision.

Mayweather remains undefeated (46-0) and became the first fighter to simultaneously unify titles in two weight classes but was unable to turn in one of those masterful performances that often leave opponents defeated after the first couple of rounds. Maidana didn’t come to be a glorified punching bag that would look foolish against Mayweather’s masterful defensive wizardry. Maidana came to win and the best strategy he and his team came up with was to be in Mayweather’s face all night. And that’s exactly what he did.

There was nothing pretty about what Maidana came to do. From the opening bell he stormed Mayweather and threw punches from all angles and could care less whether they landed or not. The strategy had Mayweather visibly uncomfortable as Maidana smothered him and did his best to keep Mayweather from using his footwork and hand speed. Despite being as much a 12-1 underdog, Maidana didn’t perform like someone who was supposed to lose and make Mayweather look good.

But what did take place was a fight filled with excitement and was far from the relatively boring chess match that fans have complained about. Maidana forced Mayweather to fight, and boxing’s cash cow made adjustments to thwart Maidana’s strategy midway through the fight. Whenever the two separated, Mayweather launched beautiful check hooks, straight right hands and kept his range with a long jab to the stomach. Maidana refused to be denied and continued to steam forward and rough Mayweather up. A head butt had Mayweather cut over his right eye and there were visible bumps on his face. Nevertheless, Mayweather did a fine job of stifling Maidana’s advances as the judges gave him a narrow majority decision with scores of 114-114, 116-112 and 117-111. “He’s rough,” Mayweather said afterward. “I always make the adjustments and that’s the difference between me and every other fighter.” 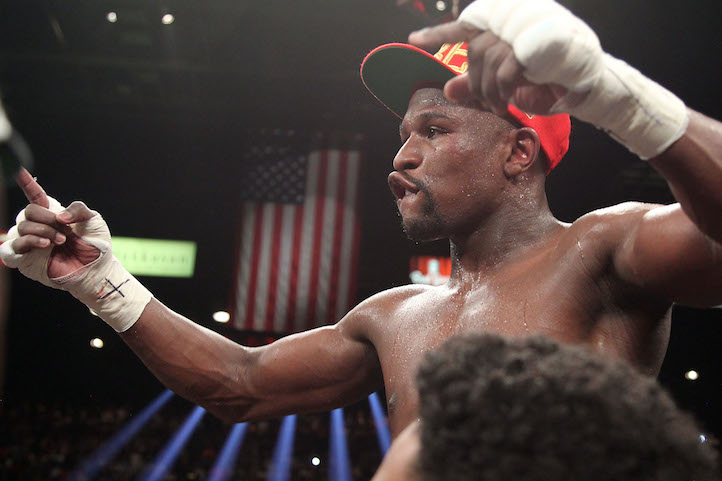 It was an impressive performance by Mayweather but the fact that Maidana was able to land the most punches on Mayweather in his career (221) was quite the feat. A constant underdog, Maidana is used to proving the naysayers wrong. He used a similar relentless attack to dispatch of Adrien Broner last December to earn the fight. Most thought that Mayweather would be able to pick off those advances but the champion said before the fight that he would stay in the pocket and trade. And that’s just what he did. “Like I said, I wasn’t going to do a whole lot of moving for this fight,” Mayweather explained. “I was going to give the fans what they wanted to see. The fans have been supporting me for almost 20 years now. It don’t hurt to give them what they want.”

The fight was close enough in the eyes of the fans that they heavily booed the decision. Maidana went as far to say that he was robbed. With the fight being hotly contested and a real struggle to find credible opponents, the idea of a rematch doesn’t sound so bad. “If he feels he won, in September he can get it again,” Mayweather said at the post fight press conference. Normally, Mayweather doesn’t entertain the idea of a rematch but is well aware that it is likely the best option for him. Especially considering that Amir Khan, who defeated Luis Collazo earlier in the night, wouldn’t be ready to fight in September due to Ramadan. With nobody else currently in sight, Mayweather will leave that door open.

Mayweather took home a minimum of $32 million while Maidana made $1.5 for his efforts. But Maidana fought like a man who deserved more than 5% of what Mayweather made. In the eyes of the Argentinean, he won the fight and would be the one granting Mayweather another opportunity. “I would have to give him a rematch because I won the fight,” Maidana said. He was speaking of Mayweather’s rematch clause in the event he lost. “Yes, I would give him a rematch.”

The only other time that Mayweather fought an opponent a second time was when he faced Jose Luis Castillo twice in 2002. Their first meeting was a closely contested battle that Mayweather controversially won. The rematch was a far different story as the then-lightweight champion made the fight look much easier. Could it be a different story the second time around? “In September, if we fight again, will it be the same fight? Absolutely not. I could have made the fight a lot easier if I wanted to,” Mayweather said.

Afterwards, Mayweather spoke about everything from his team to his strategy while Maidana sat by idly and listened. When it was his turn to talk, Maidana was through conversing about the past and addressed the future.

“Enough talk, give me the fucking rematch,” Maidana proclaimed.