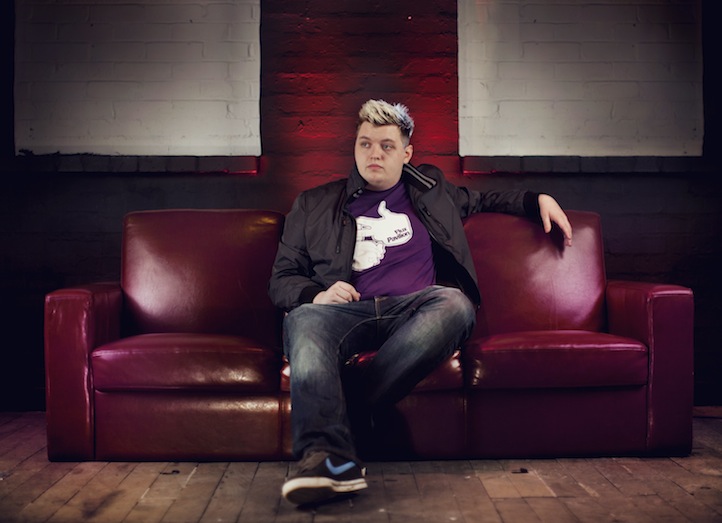 Anyone who stans for Dubstep knows that Flux Pavilion always pops up in the conversation. hip-hop fans, though, might know the UK DJ/Producer (and BBC Sound of 2012 nominee) as the sample on JAY Z and Kanye West’s “Who Gon Stop Me” off Watch The Throne. The original song is Flux’s “I Can’t Stop,” a juiced up track that was the perfect cut-up backdrop for Ye and Jay’s opus. While Flux is currently tossing around album titles and concepts for his debut (and prepping for a summer tour), he talks to Life + Times about the Dubstep phenomenon, and how he and Doctor P made an accidental Funk/Dubstep hybrid out of their latest single “Superbad.”

Life+Times: Do you think dubstep has officially taken over the world yet?
Flux Pavilion: It seems that way, but I don’t think it’s officially taken over. I think nothing will ever take over. As soon as something gets big and starts dominating, all of a sudden loads of other things start coming out. I reckon it’s living in its heyday, but there’s room for other interesting stuff to pop out of it.

L+T: Why do you think Hip-Hop has such a fascination with dubstep?
FP: I believe it’s the tempo of it. I think Dubstep is the perfect tempo that can be instrumental, but can also work with just all-different vocal styles.

L+T: Your remix to the Freestylers’ song “Cracks” shows up about twenty times a day on Pandora. Are you aware of that?
FP: No! And I didn’t actually notice that someone used it on So You Think You Can Dance. I think the person who won it [Melanie Moore], one of her winning dances, they used “Cracks” for that. So that was on TV, and yeah, since then it’s been pretty crazy. It’s really weird because I made it about two years ago, and when I first made it and started playing it in the clubs, it didn’t really go down very well at all. I enjoyed it, but I remembered playing it and the person who signed it to his label was standing behind me thinking, “Ugh, maybe it isn’t as good as we think it is.” Over time, it got bigger and bigger. Now it seems to be a pretty popular track. Same with “I Can’t Stop” and all those kind of big tracks that I’ve done. It normally takes about six months and then someone notices it somewhere, and it gets really big. It’s quite weird.

L+T: After “I Can’t Stop” was sampled on “Who Gon Stop Me” on Watch The Throne, have you been approached by other Hip-Hop artists?
FP: Yeah, we got loads of people who have approached us to do stuff. We’re just trying to fit some stuff in the diary now, because I have my tours coming up over the summer. And I’m trying to finish my first album as well. I’m trying to find some dates to go over to the States and do some work.

L+T: If you could work with any Hip-Hop artist, who would you want to work with first?
FP: Quite a big question, really. I’ve always been a big fan of Hip-Hop. For me, conceptually, I’ve really liked what MF Doom and Madvillain have done. Also those Odd Future guys, I love Frank Ocean, Tyler, The Creator and all that kind of stuff. Then going back to like Jurassic 5, Tribe, Wu-Tang, that’s all of the hip-hop I grew up on really. So I can’t really answer that. Everyone, everyone. Every single one over time.

L+T: When you’re remixing a track, what’s the first element of the original that you aim to deconstruct?
FP: It’s normally the vocal; I try to get a decent vocal hook. After playing loads of DJ shows, when playing a big track, it’s the one moment where everyone shouts along. I try to find that somewhere in the track first – the bit that’s gonna get everyone in, the big hook. Then, find the right chords around it. I normally have about ten or fifteen different chord patterns and structures to give the vocals a different energy and a different movement. Then I choose the one that feels the best and go with that.

L+T: Do you feel like people like yourself and Skrillex are making dubstep more digestible to the mainstream audience?
FP: I think maybe, but I think it’s a happy accident, really. Because I never sat down and attempted to make a track that could be perceived as a commercial hit or is digestible for the masses. I do think it’s happening, but it’s more of an accidental thing. Something we make and everyone seems to like it.

L+T: Your new single “Superbad” has a G-Funk vibe to it. Was that intentional?
FP: Basically, me and Doctor P just sat down and wanted to make an old Funk track. That’s what the intro is – just me playing the guitar, we got a drum loop going. I play some saxophone on it, and we just wanted to have some fun making some Funk. It wasn’t even meant to be Dubstep, really. We had like five hours to kill before we had to fly over to Australia, so we just sat down and made some Funk. Then Doctor P got a bass patch out and it turned into a Funk/Dubstep track. So yeah, we actually were writing Funk, and then it turned into Dubstep.

L+T: What are you trying to achieve sonically with your new album?
FP: I’m singing on quite a lot of it; it just comes full circle back around to when I used to write music and sing on it. Then it went into writing Dubstep and club music back to using these tunes to sing on it. As I’ve been writing the tracks, I’ve been kind of thinking how I can get classical instruments in there. Really, I’m focusing on the Flux Pavilion live act; trying to be as live and organic as possible.

L+T: Where did you get the name Flux Pavilion from?
FP: Actually I was in a band with Doctor P and we didn’t have a name for the band, so we wrote down like five or six band names on my guitar, and Flux Pavilion was one of them that Doctor P came up with. We didn’t use it in the end. About three years later when I decided to make tracks and post them up online, I needed a name. I had my guitar next to me, saw Flux Pavilion and thought, “Yeah, that’ll do.”