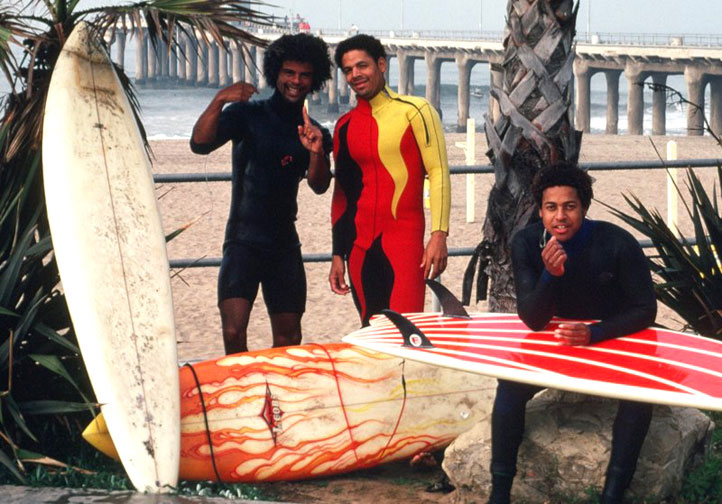 Stereotypes like “white men can’t jump” or “black guys don’t surf” are all but too common. Just ask Ted Woods. The New York native moved to Los Angeles to become a filmmaker, but little did he know that the inspiration for his first film would come from a chance invitation from a friend to catch some waves. Woods own naïveté about African-American surfers led him to document their history in his debut documentary, White Wash (which features narration from Ben Harper and  The Roots’ Black Thought). Life + Times recently spoke with Woods about surfing, racial politics and filmmaking 101.

Life + Times: How did this project come about?
Ted Woods: The short answer is I moved out to L.A. from New York and one of my first buddies [that I met out here] was a Black dude from Ohio named Airrion who became my producer on the film. I moved out here because I wanted to get involved in documentary filmmaking, learn how to surf and I had a job transfer opportunity. He was the first dude I met out here and I invited him out drinking one night and he said, “Nah, I’m gonna get up early tomorrow to go surf.” I said, “You surf? I want to learn how to surf.” So, I bought my first board from him and the impetus from the film came from conversations that we would have in the water about race, surfing, the history of Black surfers and the history of racial politics in America. On a broader scale, I went to Fordham [University] and my major was Peace and Justice Studies. So, a lot of the theoretical thoughts in the film I had taken a look at during undergrad. My folks are also lifelong learners who are passionate about history. My dad is really passionate about Jewish history and European history. He took me to Germany and Austria when I was thirteen and we went to the concentration camps. My mom is obsessed with the Civil War and [President Abraham] Lincoln. I grew up in Illinois, so I was inundated with Lincoln. We went to every major Civil War battle site growing up, and my mom would always tell me when I was little, “The Civil War isn’t over.” I didn’t really know what that meant then, but as I went through college and started studying racial politics and its history in America, when I moved out here, everything really came together — everything that I had been interested in, talking about and studying. So, we used White Wash and surfing, specifically, as a vehicle to look at race and racial politics from a different direction.

L+T: How did you all get started?
TW: First, I bought a camera. I didn’t even know what I was doing. We actually have footage of where we’re going up to the first interview where I’m reading the instruction book for the mic because I didn’t know how to work it. So, we made it up as we went. We did three or four interviews, none of which ended up in the final cut of the film because they weren’t usable, but it propelled us forward. From the very beginning, we were trying to come at this from a different angle. The surfers that we were interviewing became more open to what it was that we were trying to do. We shot five or six interviews, and then we were able to get an interview with James Meredith, who integrated Ole Miss [University of Mississippi] in 1962. And that was something that changed the game because, for us, that meant that we were doing something different. Why would you interview someone involved in the Civil Rights era and school integration in the South? How does that fit into the history of black surfing? That’s what changed the tide of what we were trying to accomplish. From there it was really about research. I would do some research and find someone I was interested in speaking with and through that I would find someone else. That’s how all the professors and academics came to light. And the surfers were just like one to the next. For them, the big thing was earning trust, the ability to have open dialogue and being trusted with these folks’ life stories and experiences. Towards the end, Airrion was able to talk with Ben Harper’s people and get him to agree to narrate the film. From there, a friend of mine was dating a girl who was connected to The Roots. She asked if Ben was doing the music for us and we said he wasn’t. She asked us if we would be interested in speaking with The Roots about doing music and we were like, “Are you serious?” That’s how we got them involved. We then did the last couple of interviews with pro surfers. [TV host and X-Games commentator] Sal Masekela was the last interview we did and he really tied the entire film together beautifully.

L+T: So, prior to this project, you had no actual filmmaking experience?
TW: No, I literally took a Film Theory class at Fordham, and I think I got a C+. I had absolutely zero [experience] before doing this. I did take a screenwriting class at UCLA but that was it. But yeah, I didn’t know what I was doing.

L+T: Did that outsider’s perspective – both as a new filmmaker and a Caucasian – influence the film at all?
TW: That’s a difficult question for me to answer because I am in it so its tougher for me to probably see it. Honestly, I came into documentary filmmaking thinking you had to be special or have had some sort of experience to be able to get involved. So, when I moved out to L.A I really didn’t have a clue. And think that’s echoed for a lot of these guys and women in the surf world. Its like I want to do that but I don’t know how to do that until finally there’s some moment where I decided to do it. That’s basically what I did and I think. Rick Blocker, a Black surf historian and an avid surfer who is featured in the film, and I became good friends. One of the things we shared was that underdog feeling. We both know what that’s like to have to fight for something. For me, it was what a process it was to finish this film and for him, it was his life’s work of being a surfer.

L+T: Did you have any preconceived notions about what you would learn making this film?
TW: I definitely didn’t expect it to tie together the way that it did from a storytelling standpoint, I was trying to figure out how to integrate the stories of the modern surfers with the history, so I was really happy about the way that it ultimately came together. I wasn’t expecting that. The completion of the film is the thing that I both expected and didn’t expect in the sense that I thought it would get done but I had no idea how it would get done. I certainly didn’t expect it to get done the way that it did. People would say to me, “Oh, I can’t wait to see it.” And I would say, “I can’t wait to see it either!” I had no idea how it was going to end and that was part of the creative process that was really challenging.

L+T: In retrospect, how much of the film is about race and how much of it is just about the sport of surfing?/span>
TW: The best way to answer that is the way that Andrea Kabwasa answers that question in the film. And you can see how flustered she is trying to process it on screen. She says, “When you catch that wave… pssssh, there is no race!” That’s what we were going for in telling this story. Airrion and I talked a lot about the concept of transcendence. At the end of the day, we didn’t want this to be another film browbeating race in America. We explore that but at the end of the film I hope that the resolution is that it is the transcendence of race that is what can be enjoyed surfing, in particular, and a new experience, in general.

L+T: What has the reaction to the film been? And was it what you expected?
TW: Seeing my name in a review with it being critical, that was really strange. When you’re doing it, you have your head down and you’re doing the best you can as hard as you can to just try and finish the damn thing. You don’t realize that once you’re through then you put it out to the world and it’s no longer yours. Reviews are really weird and I don’t like them because of that  — and I think a lot of creative’s feel that way because you don’t realize what happens next – so that’s been a learning curve. The response overall has been pretty honest. If you’re going to review the film from a technical standpoint, there’s a lot to critique and that’s okay. If you’re going to review the film from an emotional standpoint, which is what I’m more concerned with, it has struck a chord with a lot of people that have seen it. The idea of happiness and transcendence in spite of some of the legacy of race in America comes through. That’s all I can ask for.

L+T: What’s next for you?
TW: I’ve been doing some research on Post Traumatic Stress Disorder (PTSD) in the military, which is something that I think the next film is going to try and tackle – specifically the relationship of PTSD and the civilian population. What does and doesn’t happen to our vets when they return. If you look at our vets as a minority group, they make up the most at risk group in the country for mental health and well-being. They have the highest suicide rate, highest drug and alcohol addiction rate, etc. That’s something that I would to have more of a conversation on from the civilian side.

L+T: Finally, you said you went into this not knowing how to direct or surf. What are you better at now?
TW: Unfortunately, I’m probably slightly better at filmmaking. I can surf, just not very well.