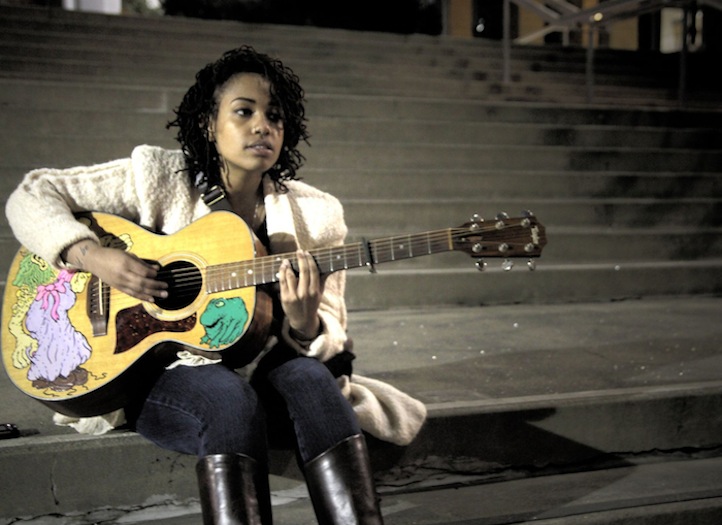 Jennah Bell catches you off guard at first. Perhaps it’s because her native Oakland, CA doesn’t seem like the most likely source of alternative folk music. However, given the Bay Area’s eclectic musical history and ever-strange present, it becomes clear that the 23-year-old singer, songwriter and guitarist is definitely a product of her environment. A hippie at heart, Bell’s music emanates warmth, honest emotion and imagination. Combining Alanis Morissette’s melancholy vocal hues, Tim Burton’s fantastical darkness and Dr. Seuss’ childlike brilliance, Bell is fashioning an experimental lo-fi soul sound all her own.

Raised in Oakland, cosigned by the Grammy Foundation and educated at the prestigious Berklee School of Music, Bell is both savant and free spirit. And thanks to her recent Early Bird EP and viral Subway Series, she has begun winning over the mavens of the indy music world with her quirky Bay Area soul. Bell sits down with Life + Times to discuss her recent EP, her influences, the west coast and being a fish out of water.

Life+Times: What is the most common question that people ask you, that you’d rather not answer anymore?
Jennah Bell: It’s not really a question, it’s a statement, and I’m just like “NO I don’t sound like her!” The two that come up the most often are Corrine Bailey Ray and Tracy Chapman. I think it’s just a visual identifier for people. They’re both awesome, but it confuses me so much.

L+T: They just define you as an acoustic black girl?
JB: Exactly.

L+T: How would you describe your sound?
JB: I like the idea that whatever is going on in my life is going to come out in the music. So my style is taking whatever is around me at a given time and trying to articulate and paint a picture of what’s going on. It’s not really genre specific, it all depends on life. I can’t afford therapy, so I do this.

L+T: What is the first song you ever wrote?
JB: It was called “Don’t Choke on a Raindrop.” I’m not actually sure what it was about, it was just something that my 2nd grade teacher said, and I just said, Ha! That’s a song! “Don’t choke on a raindrop.”

L+T: What are some of your non-musical influences?
JB: Film. I love the work of Quentin Tarantino, Tim Burton and Sofia Coppola. I also read a lot. Books are super inspirational for me. I guess it all comes under the same umbrella of expressing yourself. Right now I’ve been reading Socrates, Mark Twain, and Dr. Seuss, of course.

L+T: I can see a Jennah Bell video directed by Tim Burton.
JB: My friends always say that my name sounds like some sort of fairy tale creature, and that’s exactly what you get.

L+T: If you were an animal, what would you be?
JB: I would want to be a bear, but I think I’m a fish. I hope to manifest into a bear someday. You know, it’s the circle of life. Fish- bear. Who knows what I’ll be next?

L+T: You’re asked to be in one of those epic ensemble performances at the Grammys. Who else is on stage with you?
JB: The Philharmonic Orchestra, Bonnie Raitt, Stevie Wonder, Eric Clapton and all my musician friends.

L+T: What is/was your relationship with the Grammy Foundation?
JB: When my parents recognized that I was probably going to stick with music, they started sending to me to a bunch of summer camps. My mother used to work for the Girl Scouts, so she got an email right when they launched Grammy Camp. So I ended up applying to their singer/songwriter track, and I ended up going to the program. It was hands down one of the most amazing experiences ever. It was the first time they ever did it, so we were basically test subjects, but there were so many eye-opening experiences. We had a panel discussion with David Foster and Jimmy Jam in this amphitheater. David Foster asked who out of the 36 of us thought we were going to make it in the industry, and nobody raised their hand except for me. So he called me down to the stage and said, “You have 30 seconds to show me what you can do.” I didn’t have my guitar on me, so I hopped on piano and played the only thing I could remember writing. I was notorious for having ridiculous stage fright, but somehow I got through it, and he told me, “That took a lot of courage.” And ever since that moment, I just feel like I have to do it. There’s no in between if you want it for real.

L+T: What gets you up every morning?
JB: My cat. And this is going to sound so corny, but there’s more than 12 hours in a day to do something better… to make yourself better.

L+T: Talk about the Early Bird EP.
JB: I had all these songs that I’d recorded in my dorm room over the last five years that I’d never really thought anything about. It was just me experimenting and playing with sound. I was trying to figure out, without the actual vocabulary or skill, how to make something that was a little bit more high definition– to see what I could milk out of these sounds. I had all these lo-fi recordings that people knew me by in school, so I recently asked, “Would it be weird if I just released that stuff?” Given today’s technology, it’s not the clearest sounding stuff, but it’s a good introduction into the different kinds of music I make, so I decided to put it together.

L+T: Where did the name Early Bird come from?
JB: The name Early Bird came from the idea that it was all this early material, and it was also the name my aunt used to call my mother when she was a kid. My mom’s name is Erlay, and she, my aunt, would call her Early Bird. And at the time of recording this, my mother had just gotten out of the hospital so I thought it would be a perfect opportunity to pay homage to one of my biggest influences.

L+T: How has studying music in a formal setting helped or hindered your music?
JB: In terms of help, it’s a tool like anything else. You never know where you’ll find yourself or who you’ll find yourself with. It’s hindered me by making me too invested in musical theory. When I wasn’t getting the theory aspect of it on paper, I thought I was bad at music. You have all these groups of kids who are good at theory, and then you have these kids with all this natural talent, but when it comes to the paper stuff, it doesn’t translate. I sort of found myself in limbo with both of those and sometimes feeling like I wasn’t good enough, if I didn’t get the paper stuff. Music school is not for everybody. It’s a choice I made, and I’m happy I made it, but there were some rough spots in my college career.

L+T: What’s the main difference between the east coast and the west coast that most affects Jennah Bell on a daily basis?
JB: The people are just so much chiller on the west coast. There’s a progression in the west coast mentality that’s just a little bit more appealing to me. There are so many different kinds of people in the Bay, but it works. And I love the East coast, but I love my tree hugging people.

L+T: What’s next for Jennah Bell?
JB: That’s a question I’ve been asking myself too. The idea is to build an audience from the ground up. I really want to get a residency in a great place in New York, build an audience and continue to play the music that I love. I don’t have to blow up; I want to last. I want to be able to do this for a long time and allow people to creatively grow with me.