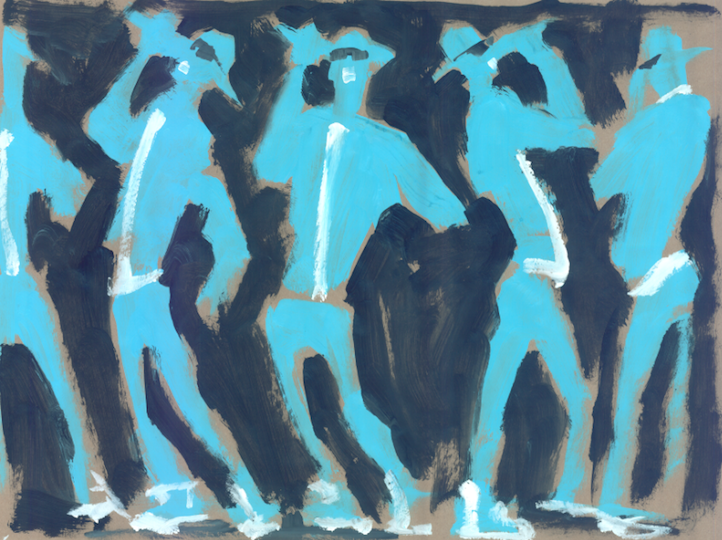 By day, Donald “Drawbertson” Robertson spends his time as one of the creative forces behind the Estee Lauder Company brands, but by night (and early mornings), Robertson creates what he calls “tongue and chic art”; his playful creations that got the Instagram world buzzing. Now, after toying with the idea of e-commerce, he’s decided to start selling his freehand pieces on Trendabl. And if there was a heightened demand before, now it’s skyrocketed.

Life+Times: Let’s take it back a little bit. Anyone who is active on Instagram knows about your drawings. But, your career and path is quite… colorful. You’re one of the three original founders of MAC Cosmetics. When you launched, what was your motive? What was your initial idea behind the company?
Donald Robertson: “ALL RACES ALL SEXES & ALL AGES” is the best branding slogan I ever wrote…if I do say so myself. It seems relatively tame these days but back in the 1980’s this was a real stake in the ground for a small cosmetic brand. I worked with Frank Angelo and Frank Toskan and the team. We were all Canadian and kind of cut off from the traditional make up brands. Being up in Canada made us rethink everything. We never had one face representing the brand – we hired real makeup artists to work our counters not salespeople. We were cruelty free and we recycled. We also took a pretty major stand when the AIDS epidemic broke out. At the height of the publics panic over this then unknown disease, we launched an AIDS awareness lipstick campaign that raised money to find a cure. Since then, MAC VIVA GLAM has gone on to raise close to $300 million dollars since it launched. It was a crazy time and I have to say it was very dangerous back then for a tiny cult makeup brand to be so revolutionary. MAC is now the largest prestige makeup brand in the world …and it’s still about “ALL RACES ALL SEXES & ALL AGES” to this day.

L+T: Now you spend your days as the head of Creative Development at Bobbi Brown Cosmetics. What does your job entail?
DR: Actually John Demsey has created a new role for me within the Estee Lauder Company. I’m now a roving guest Creative Director. I’ll spend time with a brand to help them shake stuff up and keep things fresh. I will work on branding, store design, and new product development. It’s fun and I’ve been hanging with the Smashbox crew in LA recently.

L+T: For the past while you’ve been posting your artwork on Instagram – which, needless to say has caught the public’s eye. What do you think it is about your creations that strike such a positive cord?
DR: People love free stuff… and Instagram is free. That’s why! 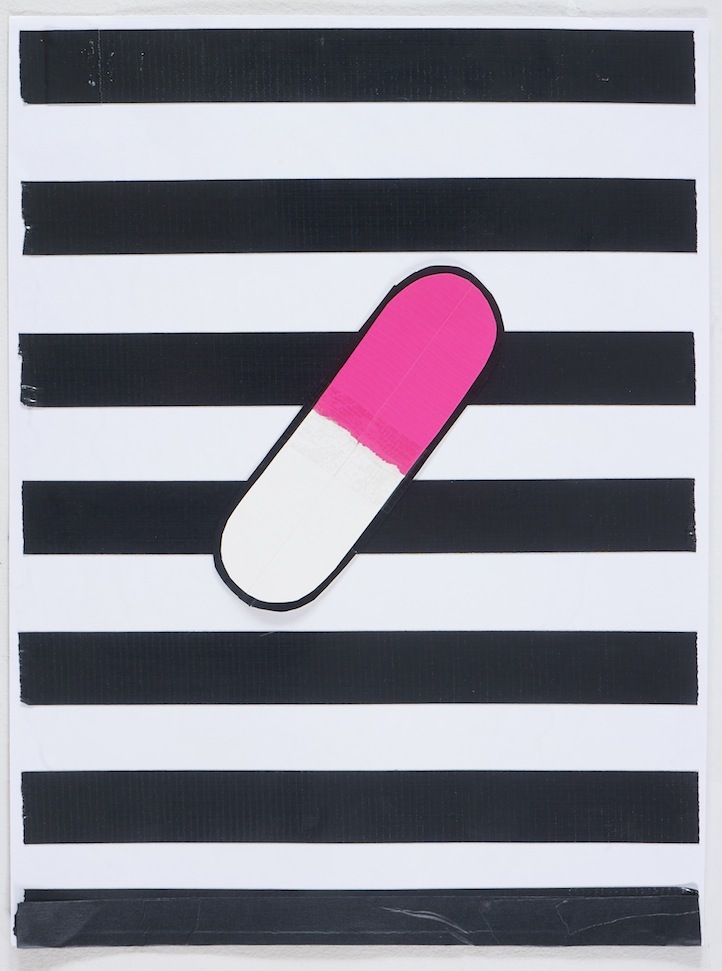 L+T: How would you define your aesthetic? It’s funny and whimsical and lighthearted. But, how would you define it?
DR: I call it “tongue in chic.” I’m not just drawing stuff; I’m painting ideas or poking at trends that the world is vibin’ on. Take Pharrell’s hat for instance. I could riff on that all day long because it’s so great and now the guy is wearing women’s Chanel. It’s all too good.

L+T: Who were some of your early supporters, in terms of your artwork?
DR: So a year ago when I first popped on the Instagram scene a couple of designers called me out pretty quickly. One of them was Lisa Perry. She was like “Who are you and where are you and when can we meet”? A few days later I was at the Mark Hotel bar with her and she was telling me what we were going to do. “I like your gaffer tape art. I want you to gaffer tape my store for our show. The whole store. Floors, ceiling and walls. GO.” And so I did. And it turned out great. 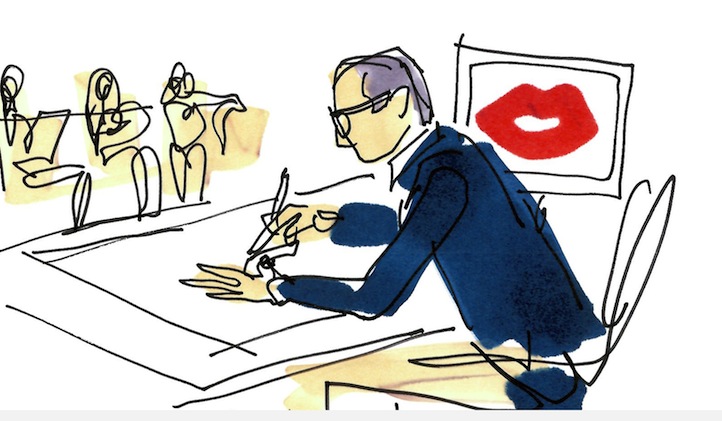 L+T: The New York Post recently dubbed you “the suburban dad’s Andy Warhol.” What do you make of this?
DR: When The New York Post came to my studio to shoot my work, this Post staff photographer handed me her iPhone and said “Do you know what all this stuff is on this list that I’m supposed to shoot And it read like this: a pile of Louis Vuitton garbage, a Kermit the Frog Birkin Bag, Kanye and Kim Vogue Magazine cover sketch, Anna Wintour walnut head, Pharrell Williams, painting of Lupita that she regrammed, gaffer tape paintings, Whole Foods bags, and a herd of Beyoncé paintings. Luckily, that is all my favorite stuff. I love suburbia. I have a wife, five kids and two dogs. I love lawns and houses and grocery stores. I love Target. I love painting on cereal boxes or on anything recyclable for that matter. I guess that’s why they call me the suburban Andy Warhol. I love that Korean Vogue is calling me to do a piece for them and I’m at a little league game. It’s so easy being a freak in the art world. Being a normal guy that paints walnuts to look like celebrities is hard. But I’m trying. 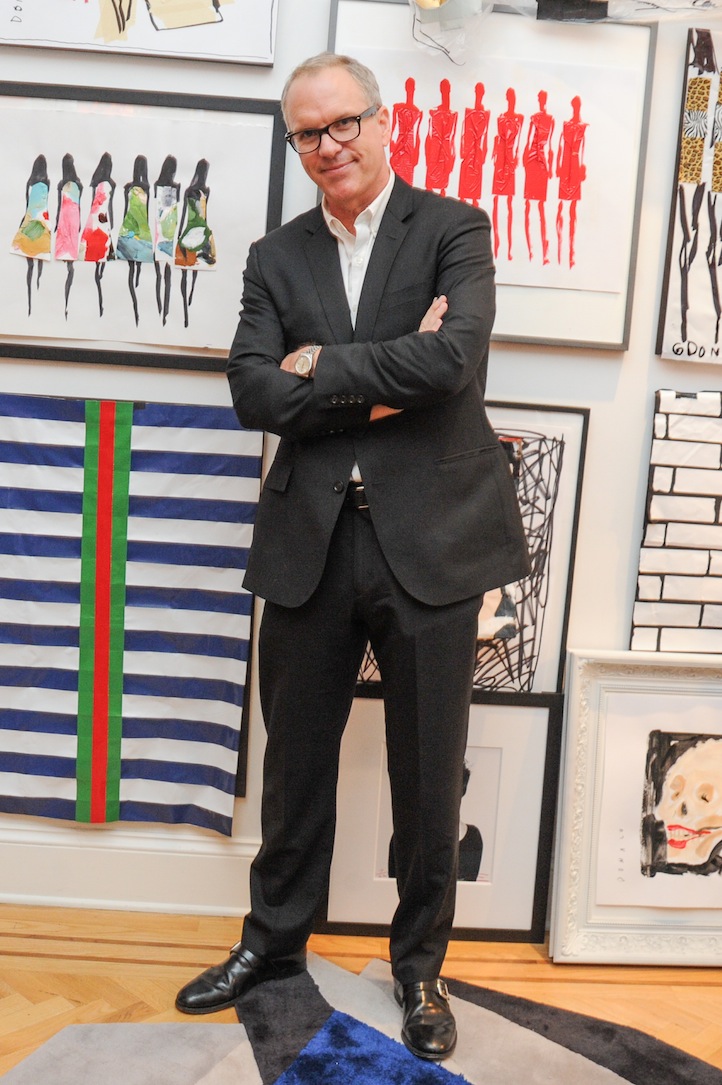 L+T: The fashion crowd has certainly taken notice of your creations. Why?
DR: Twitter is for talkers. iTunes is for listeners, and Instagram is for lookers and picture people. It’s that simple. Fashion people like to look and snoop and discover new things to stare at. That’s why. But, they get bored easily which is why you have to change it up daily.

L+T: You recently also started selling your creations on Trendabl,  giving your followers and fans something they’ve been asking for. Was this always the game plan?
DR: Everyone was asking me to sell them art but I didn’t want to talk prices or take credit cards. My assistant Lily Saltzberg introduced me to her friend Jon Alagem’s new shopping app as a work thing and literally a cartoon light bulb went on over my head. The next day Jon was selling and shipping my prints. It’s incredible.

L+T: Who would be your dream collaborator?
DR: I want to work with Comme des Garçons, Disney, Louis Vuitton, Kellogg’s and seriously, I think the Catholic Church needs to rebrand itself. I like that Pope Francis. 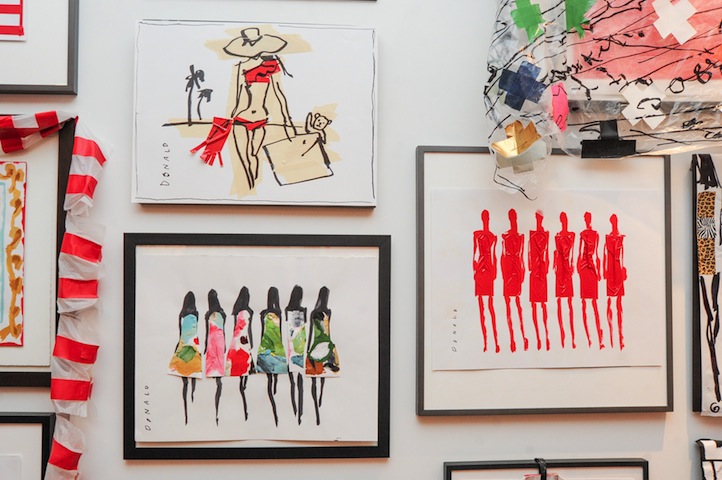