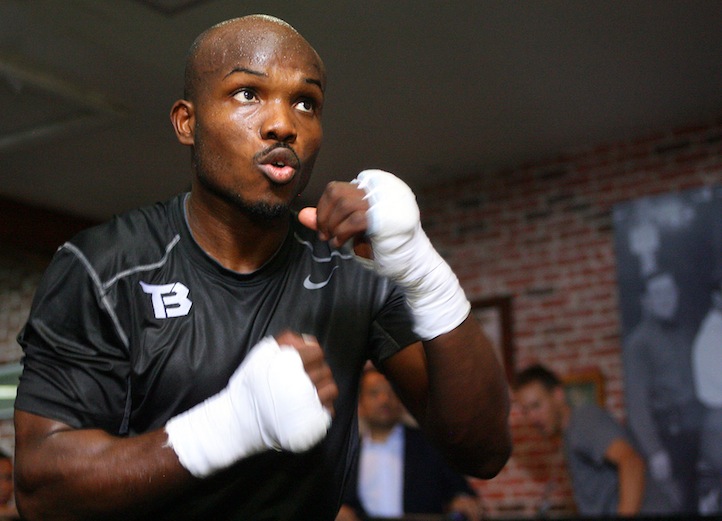 Timothy Bradley knows his role on June 9th is that of “The Spoiler.”

Casual fight fans could care less about his credentials — undefeated in 28 professional bouts and current WBO light welterweight champion — and look at his opportunity to fight Manny Pacquiao as a gift for exposure and a huge paycheck to be a crash test dummy that the Filipino mauls. Bradley is supposedly just another speed bump on the highway to Mayweather-Pacquiao. But fight fans know better. Timothy Bradley damn sure knows better.

“I wasn’t the first choice but they had to settle,” Bradley says. Obviously, Mayweather being #1 and the man that Mayweather defeated on May 5th, Miguel Cotto, was #2. With both of them out of the running, Pacquiao turned to Timothy Bradley to be his opponent on June 9th. “I just think they ran out of opponents that were worthy but I’m more than qualified for this opportunity.”

When the fight was announced, many scoffed at Pacquiao’s opponent. While Mayweather was facing a bigger name like Cotto, Pacquiao was facing some guy that casual fight fans had never heard of. Forget being the underdog, you could put Lassie in the ring with Pacquiao on June 9th and he’d get more recognition than Bradley. But those who are in the know are well aware that Bradley is far more dangerous than others may be led to believe. 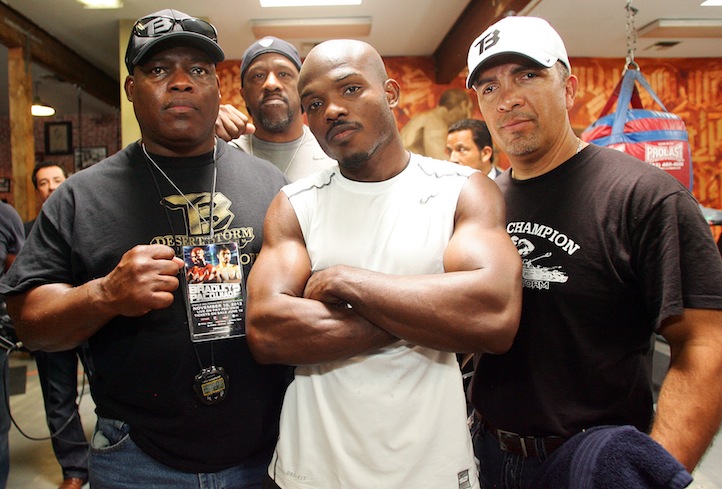 At 28-years-old and with an undefeated record, Bradley already sets himself apart from Pacquiao’s previous opposition. Sure, Pacquiao has fought so-called stiffer competition, but upon closer inspection you will see how many ways Bradley is different than anyone Pacquiao has faced during his rise up the pound-for-pound lists.

Pacquiao hasn’t fought an opponent as young as Bradley since Emmanuel Lucero in 2003. The last undefeated opponent the Filipino faced was Jorge Solis (33-0-2) in 2007. It’s 2012, and Pacquiao is taking a risk against an opponent who wants nothing more but to usurp the boxing congressman’s lofty position on top of the boxing world. And contrary to popular (read: ignorant) belief, Bradley wasn’t given this opportunity, he earned it, the hard way.

“I wasn’t spoon fed,” Bradley says about his career that began in 2004. Many times, Bradley was put in the ring as cannon fodder for the likes of Lamont Peterson, Junior Witter and Devon Alexander. But Bradley proved all of them wrong as he trudged his way through the opposition. “I started fighting in small ballrooms. I wanted to fight in Vegas one day and now my dream is coming true. Those fights were baby steps to get me where I am today. I definitely appreciate all of this a lot more than someone who was just handed it. I had a small contract with chump change that kept me hungry and determined.”

His unrelenting determination and desire to be the best despite what anyone has to say has pushed Bradley’s training to a pace that would likely kill the normal man. As the epitome of hard work, tales of him running 23 miles a week before a fight to test his endurance and body are proof that his work ethic is unquenchable. Fighting twelve rounds is little more than child’s play. While some fighters train harder depending on the level of fighter they are facing and the purse, Bradley focuses on one thing, winning.

“Don’t pay attention to the money,” he says as he recalls scrapping cash to keep his lights on in the earlier stages of his career. “What’s important is winning. Once you win a title, then you worry about collecting. Just stay undefeated.”

You’ll notice that Bradley rarely talks about fame. He trains out of Indio, California, which is more recognizable for the Coachella Music Festival than any singular human being from that area. His entourage consists of his wife, father, trainer, manager, two stepchildren and recently born daughter. He’s a virtual unknown and although he would like to be a superstar, he’s at ease with his current lifestyle.

Last November, after Bradley defeated Joel Casamayor on the undercard of Pacquiao-Marquez III, I spotted Bradley milling about the MGM Grand Garden arena. He wasn’t bothered by the lack of recognition as he blended in with the rest of gamblers, fight ticketholders and various others loitering about the casino grounds on fight week. But he wore a scowl on his face. He wasn’t angry but he wanted more. He wanted the big fights and bright lights; something he wasn’t getting before he joined Bob Arum’s Top Rank Promotions. To prove how money is secondary, Bradley turned down a then-high purse of $1.3 million to face Amir Khan last summer to join Top Rank in hopes of landing a fight with Pacquiao. 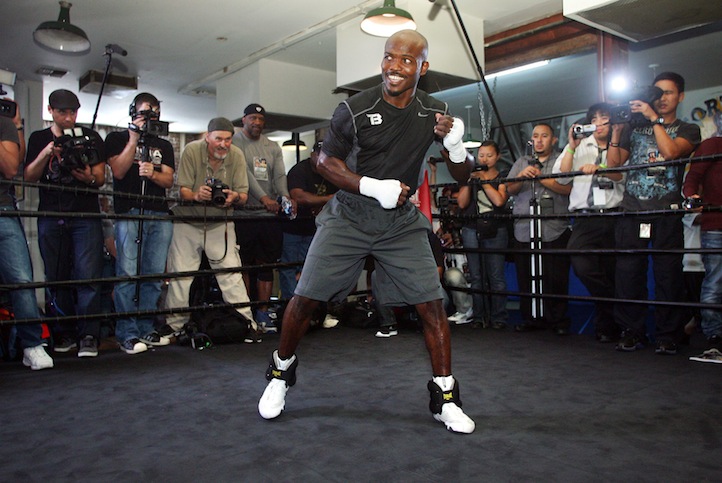 It sounds ludicrous to think that a man would turn down a guaranteed million dollar fight because he felt like he wasn’t getting the recognition he deserved — not as a celebrity, but as an fighter. “It was a career changing business move,” Bradley says with a laugh, knowing that those that criticized him have egg on their face today.

“Boxing is a business and I realized I need to be with the right promoter,” Bradley explains as his previous “life changing” fights with Alexander and Peterson barely saw the needle move on his career. “I need to be a superstar and change this game around. I wasn’t happy. Why am I fighting in Detroit and not New York or Las Vegas? My family, my manager and I decided that it would be best for me to move on (from Gary Shaw promotions). I want to be with someone who believes that they can make me a superstar.”

Obviously, the move paid off and now Bradley is facing arguably the biggest star in the sport. But he’s far from star struck and his confidence is soaring. It’s not a faux bravado. He’s been here before. When others count him out, he ends up counting his winnings as the victor with his hands raised. And after watching Pacquiao’s last fight with Juan Manuel Marquez, Bradley’s assurance has reached epic heights.

“I saw what Marquez did and was like that’s all I have to do?” Bradley says enthusiastically. “If all I have to do is counterpunch and step around (then) I’ve got a whole bunch of leather for Pacquiao’s ass. Marquez made him miss and made him pay for his mistakes that got Pacquiao frustrated. I’m way faster than Marquez, I have really good boxing ability and I let my hands go more than Marquez. He’s 38, I’m 28.”

Concerns that Pacquiao’s attention may be elsewhere also gives Bradley an advantage on June 9th. He doesn’t concern himself with numerous television appearances, political aspirations, Floyd Mayweather, family and training camp conflicts or making religious statements about gay marriage that cause an uproar. Timothy Bradley is focused on being “The Spoiler” on June 9th. After that, then he’ll worry about everything else, including knocking off the other baddest man in the boxing world, Floyd Mayweather.

“My mind right now is on Pacquiao and everything else will follow after I win. But in the back of my head the idea is to ruin Pacquiao-Mayweather any way I can, be the next man to face Floyd Mayweather and take him out.”