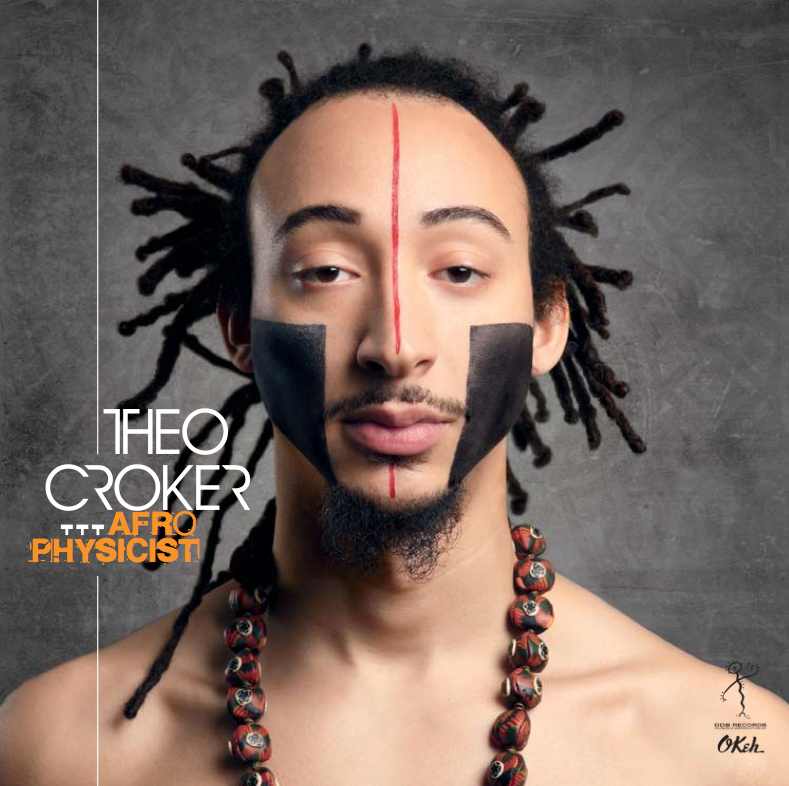 Theo Croker comes from a diverse background – genetically and musically – and his third, latest album, AfroPhysicist, is the ultimate reflection of it. A blend of jazz, funk, soul, and even rock and hip-hop, AfroPhysicist finds Croker weaving through genres without missing a beat. An extending stint living in Shanghai, China, and working with Dee Dee Bridgewater, who co-produced the album with Croker (it’s being put out on her label, DDB Records), were also key catalysts for what became the final product.

The mélange extends to the song selection as well, featuring potent original songs in addition to covers of Michael Jackson’s “I Can’t Help It” and Stevie Wonder’s “Visions” among others. Life+Times spoke to the young trumpeter about AfroPhysicist, living in China, and more. 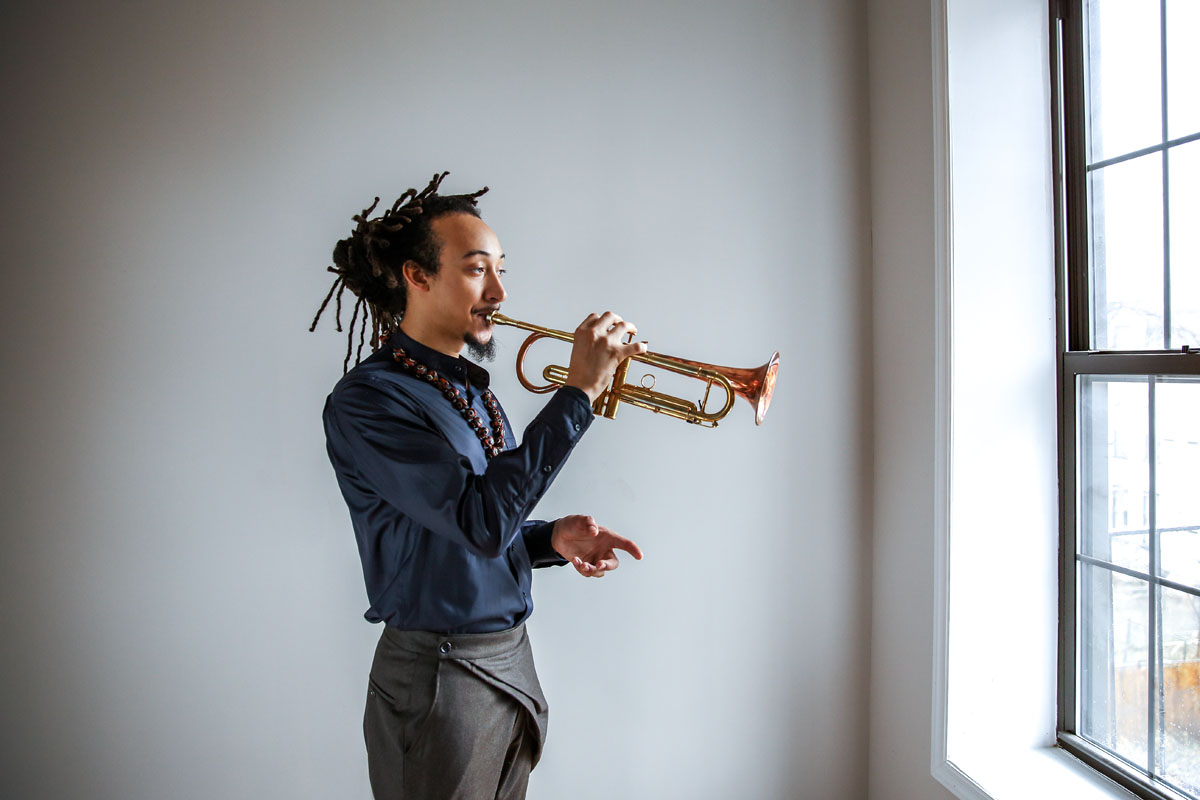 Life+Times: Talk about the title of the record, AfroPhysicist, and the diverse sounds that you’re bringing together for this album.
Theo Croker: “AfroPhysicist” has kind of become my nickname among my friends and musical family because I like to take lots of elements of sound and music regardless of the genre, and and incorporate them into what I’m playing. I grew up in the States listening to everything from Gloria Estefan to Outkast, so I have all these elements in my head and trying to fit into one genre has always made me a little cooky, so “AfroPhysicist” has kind of become my nickname, my alter ego to just be wild mixing different things and sounds and not really worrying about [it].

L+T: Describe the record “Light Skinned Beauty.”
TC: “Light Skinned Beauty” is really a song about the complexity of being multiracial. I come from a multiracial background; I’ve got Native American, Black, Dutch, Chinese, Argentine and people like me just get referred to as light-skinned. The concept with the song musically is that it goes through a lot of changes quickly. It’s got a lot of different feels. It’s got a rock feel, a hip-hop/R&B feel, a very fast jazz-funk feel to it, all these different sections. That kind of reflects – I’m an American but I’m a part of many different cultures. That’s what that song reflects and my hope to find a woman as mixed up as me one day.

L+T: How did the opportunity with Dee Dee Bridgewater and her record label come about?
TC: Well me and Dee Dee first met in Shanghai in 2008 or 2009, I think, at a festival where I was in a band that was playing behind her. We met at rehearsal and started rapping and hanging out. She came down to my gig after her show and ended up sitting in with me and my band for hours. We just kind of struck up a friendship and when she left [Shanghai] we stayed in touch. She came back again a few months later with Herbie Hancock on the [U.S. Department of State] Tour. We kicked it some more and she invited me out to lunch and told me she was interested in producing a record with me and getting me signed, saying she thought my music and ideas were strong and that I needed to come back to the States and present it. She wanted to help me open the door. When she left, I had given her an iPod of all my music, everything I’d ever logged; we met again a couple months later and pieced it together from that. It’s been a nice steady relationship making music together. I’ve toured with her band for the last two years. We have a very strong musical connection.

L+T: You’ve got a great band, plus features from Roy Hargrove and Stefon Harris. How was it working with them?
TC: One of the key points that me and Dee Dee arrived on when we made the album was that we weren’t gonna make a “jazzy jazz” album. We were gonna do something with a lot of songs that were coming out of different genres. I wanted to be sure that I had some unique things happen. For example, having Roy Hargove sing on his song [“Roy Allan”]. Roy has been a mentor and friend to me for a long time, at least 10 years. He’s been very supportive and helpful. I just wanted to show my thanks to him personally by recording one of his songs. We were in the studio, I called him, he happened to be in town and I convinced to come down and sing on it which I think he kind of thought was a joke until he got to the studio. He heard the tune grooving then he went in the booth, no questions asked. That was really cool to me. Stefon Harris I had known just as an admirer, but when we decided to record the song “Visions,” we thought it essential to have some vibraphones on it to kind of flush it out and give it a unique sound. Immediately, Dee Dee was like, “We need the one and only Stefon Harris.” So she put a call in, I sent him some music and he agreed to play with me. We did a couple takes and we took the best one. He’s a great cat to work with. Both cats are at a very high level musically, it really just enhanced everything. They’re wonderful people.

L+T: You spent a lot of time in China. How did being over there influence you as an artist?
TC: I lived over in Shanghai, China for about six or seven years. What I found it did for me was a couple things. First of all, I got a lot of work, all sorts of opportunities to play. Hip-hop bands, salsa bands, jazz bands, big bands, there was a lot of demand for musicians to do all kinds of things, so I got exposed to some things. In New York, I would probably never get called to play in a salsa band because there’s so many cats that specialize in that. Another thing was the freedom to create and express myself as an individual without being judged by other people that were doing the same thing, and without being influenced by other people who were doing the same thing. I didn’t have anybody to look up to necessarily when I was living in China, I set my own standard, presented my own image, my own craft and my own tone. There wasn’t any kind of support system to go by. That gave me a lot of freedom to go as far as I could with it. A lot of the music on the album is a result of that. The third thing is I had a lot of time to practice. I had a piano and the living situation I was in, I could pretty much practice 24 hours per day. That’s also difficult to do in New York. Those things really helped my develop who I am. Living in a country where there’s billions of people who are one race, and you’re completely another, it really gives you the opportunity to have to represent yourself and believe in what you’re doing because you have to get people to rally behind it.