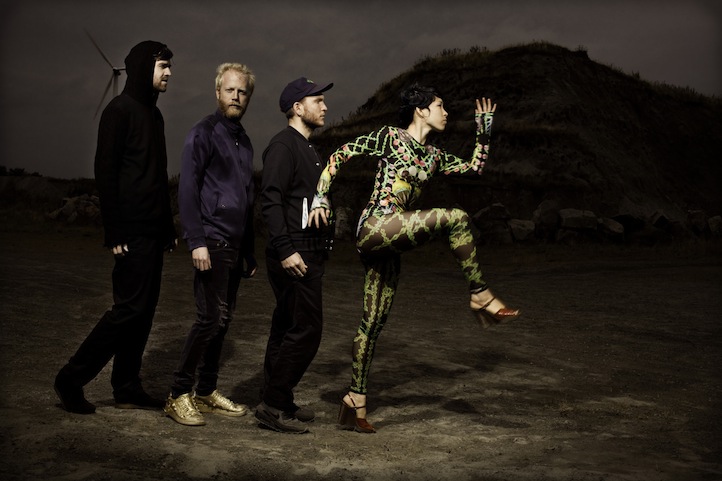 If any other band compared its live performance to licorice – because it’s “soft and sweet” and “hard to describe” — you’d probably recoil at their pretentiousness, but Little Dragon isn’t just any band. Humble, humorous and devoid of pretense, the group is a quirky quartet of Swedes made up of bassist Håkan Wirenstrand, keyboard player Fredrick Källgren, drummer Erik Bodin and Yukimi Nagano, the half-Japanese, half-American chanteuse for whom the band is named. Their minimalist electro-soul sound has put them on the radar of eclectic music fans the world over and their live show is definitely something better experienced than described — the licorice reference is just a native Swedish speaker’s awkward way of saying “you just have to be there.” Life + Times sat down with its members to talk about their creative process, their new album and why they don’t use guitars.

Life + Times: Explain the Little Dragon experience to people.
Fredrick Källgren: It’s beyond describing… You have to go to it. It’s like licorice; it’s hard to describe how it tastes [exactly]. It’s soft and it’s sweet but you really have to try it [for yourself].

L+T: What is it like to be embraced by the music community around the world—to get all these props, accolades and love?
Yukimi Nagano: I mean it’s pretty strange and also really amazing and fun. And it boosts your confidence and I think you just feel blessed to be doing what you love. Like our jammin’ out in our studio is being received by people in all kinds of different places and being appreciated.
Håkan Wirenstrand: And being appreciated by people we have been listening to—
YN: Yeah! It’s surreal I guess.

L+T: Name some of these people who you’ve been listening to who have been like, “Yeah, I’m a fan of Little Dragon.”
Erik Bodin: For example Raphael Saadiq, we always loved him and all the things he’s done, so that was pretty huge.
YN: Wendy and Lisa (of The Revolution). They were asked in a YouTube video, “Who would you like to collaborate with?” and they said, “Little Dragon!” and we were just in our studio just like [gasps!]. Also, De La Soul, DJ Shadow, Andre 3000 and Big Boi.

L+T: That’s cool. I come from a hip-hop background myself and that led me to be curious about all different types of music I learned about Little Dragon from other people who were hip-hop heads who liked ATCQ, J Dilla and stuff like that. Why do you guys think that community embraced Little Dragon so much?
YN: I think that says a lot about hip-hop music and just about being curious. That genre of music is about using samples and being into all different styles of music that you transform into the hip-hop sound. I think that’s definitely part of [Little Dragon’s appeal]. You’re open and you want to hear new stuff. We’re inspired by like J Dilla and all that. For us, it’s like you love that music but you’re not from that culture and as much as we would try to make that sound, we just can’t make it. So we have to make our own and take the inspiration from there and all the different things that we love and mix it up.

L+T: A lot of bands get known for a sound they have at a certain time but many people don’t realize that the band went through a number of evolutions before they got to where they are. You guys have all known each other since high school, so what types of music did you guys used to play when you were in your experimental phase?
YN: [laughs] I don’t know if you want to know this!
EB: We had a freeform band for a couple of weeks. We were talking about forming a band in school – I don’t know what it’s called in English [says something in Swedish]. You know like dint-dinna-diiiiiiiiiin [imitates trumpet sounds]. Just to get into that whole thing and just jam on different kinds of salutes.

L+T: What about vocally? How did you arrive at your style of singing right now?
YN: In the beginning I was really trying to sing like an American R&B singer.

L+T: I’m dying to hear your Mary J. Blige demos.
YN: I really tried and I loved Faith Evans and Lauryn Hill but I just couldn’t do it because it wasn’t me. So I think after you test it out then do some more songs that are more free, you’re like, “Fuck it, let’s just do whatever.” Maybe you can’t do that ad lib like so and so but whatever. Who cares? It’s about making a song and trying to say something.

L+T: What is your creative process like?
EB: Sometimes it starts with drums. I usually just record drums all the time with different beats that I play. Sometimes Yukimi comes up with something already that goes on top of the drum beat itself and we find something. Then we’ll be nodding our heads for a couple hours and then we’ll play it for the others and they’ll say “Eh, that’s embarrassing” or “Wow, that’s so good”
YN: Then just let it be.
EB: Sometimes you just let it be for a couple of days or whatever. It can stay for a long time and you can get to it later on.
YN: Everyone writes and produces a bunch of stuff and we have a lot of material and some of it we sort of forget about— actually a lot of it—but the ones we feel have something, we continue on until we finish and the ones we finish that we love end up coming out. We have a lot of stuff even beyond the third album [that] we want to play as well.

L+T: With this third album is the sound going to be much of a departure from what you’ve done before?
FW: It definitely has a connection [to the older stuff] but it’s another step. I’d say it’s more soulful and maybe a bit “tribal” if you can say that. But you will definitely recognize the Little Dragon sound.

L+T: I want to ask you about lyrics and your choice of language. Why do you sing in English?
YN: I’ve gotten that question a lot. Honestly, it’s the most normal thing for me. Writing in Swedish would be really hard, not just because my mom’s American, but most Swedish artists would say that it’s just kind of in the Swedish culture to write in English. There are a lot of artists who’re famous who write in Swedish, but generally most artists and bands will write in English. It’s just kinda what you do; I think we’re so influenced by Western music culture that it’s natural.

L+T: As far as actually writing lyrics some people start with a piece of poetry and set it to music; some people just recite melodic gibberish to an instrumental before fleshing out the song lyrics. What’s your process like?
YN: I think it’s the same thing as when the guys write the music— sometimes it’s drums sometimes it’s a melody and it’s the same thing with lyrics. Especially when I record when it’s only drums and vocals–sometimes it’s random or just some thought that I had or it can even be pieces of sentences that have something that I want to take further. There’s not just one method.
EB: The ideas will come quickly.
FK: And you just have to be ready to record!
EB: Yeah, otherwise Yukimi will be angry at you! [laughs]
YN: I think the music that they make gives me a direct feeling. The sounds have so much of an instant feel to it that usually I’m like, “I really like this. I’m gonna try to write something to it.” And sometimes I struggle and listen to it over and over and try to write something or sometimes I listen once I’m like, “I know I’m gonna find something for this.” It’s both, up and down. Sometimes when you haven’t been in the studio for weeks, you know it’s gonna be a bit tougher, like the first two weeks, and then you’re going to find the flow of it and that’s the high of being creative: when you can just let go and not be so analytical. You just let it flow.

L+T: I know you’ve probably heard this question before but I’m going to ask you for the billionth time: Why no guitars in your music?
FK: Well, for the first part, no one in the band is really a guitar player. Like we can play a few chords, but the thing is our studio is next to the [train] tram crossing so as soon as you plug in a guitar, and sometimes with the electric bass, you get this horrible hum and buzz and you can’t get away from it.

L+T: You have a very diverse fan base, how do you think most people discover Little Dragon?
YN: I say word of mouth because we’ve been here quite a lot and played places across the country. Even when we played at the Milestone in Charlotte–it’s the shittiest punk club ever like you don’t even want to touch anything–it was like a third or almost half-full. And then we played that place again and it was all full and basically, [people] had come out to dance and have a good time with us. It’s grown very gradually. We haven’t gotten that much help!

L+T: That’s truly organic. What role do you think the Internet’s played in this?
EB: Huge! With Myspace and Facebook.

L+T: You guys are still on Myspace?
EB: Yeah!

L+T: So you actually go on like on “a normal day?”
YN: No…
EB: It used to be that I was there all the time, but then they changed the lay out and I didn’t understand anything. I got tired.

L+T: Any final thoughts for the people?
YN: Third album coming out this year…