Hearing hip-hop and pop records transposed on live instruments is always a pleasure for avid music fans, and The Soul Rebels are giving the people exactly that on their new Power = Power mixtape (available now). The eight-piece New Orleans-based brass band comes from the city’s storied musical tradition, but also embraces contemporary music and has never been afraid to push the envelope. The approach has opened the doors for a wide and diverse fan base.

“When you come to a Soul Rebels show you see all kinds of people,” said Lumar LeBlanc, the Soul Rebel’s founder and drummer. “Like Cyril Neville said, our show is like the United Nations. It’s all races, creeds and colors who love hip-hop and urban music. That’s the kind of crowd we’re trying to get.”

Life+Times caught up with LeBlanc to discuss the Soul Rebels and Power = Power. 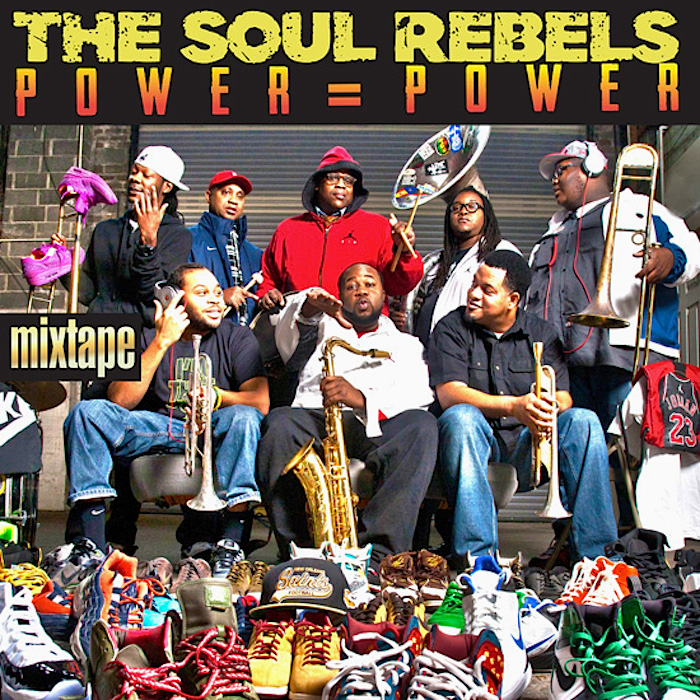 Life+Times: Where did the Power = Power title come from?
Lumar LeBlanc: Power = Power reflects not only the artistic power that the Soul Rebels have, but, more or less, the mentality of trying to force the issue of being innovative and creative coming from a jazz, brass band vibe. New Orleans brass band music has a storied history that’s based in tradition. When [people] think of it, they think of Mardi Gras, “When The Saints Go Marching In,” different songs with the party atmosphere from the Mardi Gras celebrations in New Orleans. We love that tradition. We started in that. But Soul Rebels always wanted to be a more urban, hip-hop act, so we always pushed the envelope and we off very strong and progressive. The title Power = Power definitely is that. I’m sure we’re the first brass band to do a mixtape and we wanted to do something that reflected our contemporaries.

L+T: The name Soul Rebels comes from that same vibe then?
LL: Exactly. We wanted to rebel, but for a positive cause, not against it. Rebel for positivity, freedom of expression. The name obviously comes from Bob Marley’s “Soul Rebel,” but we were named by Cyril Neville of The Neville Brothers. Our sound, he said, reflected powerful soul rebels of the brass band music pushing the envelope. When we started, the songs reflected more of a Public Enemy kind of style. We had some freedom, Black Power overtones. We had rap and everything, it wasn’t your normal jazz brass band album.

L+T: One of the first things that jumps out on the mixtape cover is all the shoes you have on there.
LL: Oh yeah [laughs], I’m a sneakerhead man. I really got that bad. I love tennis shoes and most of the band is sneakerheads. We wanted to have a CD that reflected what we really are about and what we like. The old Blue Note jazz albums were awesome. [The covers] with the smoky room, dim lights, a guy with a cigarette, maybe a saxophone in a nice Brooks Brothers suit. But we wanted to reflect who we were. We’re definitely about gear.

L+T: A lot of the songs are cover records. There’s several JAY Z joints, songs by Drake, Daft Punk, Bruno Mars. How did you decide which records to include on Power = Power.
LL: Well, you have to pick a song that you feel can be transposed to the horns, first of all, and to our acoustic instrumentation. We have a big tuba sousaphone, two separate drummers, two trumpets, two trombones and a tenor saxophone player. So we had to pick songs that had some good melody to transpose to the horns and give it that powerful sound. Then we incorporated our raps and whatever other vocals we put on there to give it that hip-hop, urban flavor. We picked songs that do that, plus we picked artists that we like. All the artists that we covered, we actually love their work. That was the determining factor for that.

L+T: How has hip-hop influenced your playing style?
LL: Our playing is kind of funky and has so much depth to it. Sometimes we do get carried away with the intensity because, just like a hip-hop artists, the crowd gets going and you get into the show. You lose your mind in what’s going on in that heat and intensity. We come from a mixture of jazz, marching band and symphonic band. So we really feel those horns up with a lot of air and power, then we add amps to the sousaphone and subwoofers with the bass drum because we want the people to feel it just like a hip-hop record and concert. So, hip-hop has definitely influenced our style, we try to sound just like what you get on a hip-hop record. We bring a lot of power to our music.

L+T: Are there a lot of similarities between brass band music and hip-hop?
LL: I think the way we play it there’s definitely a lot of similarities. We go in the studio to record just like any other artist, with the drums on [different] tracks, so the beat can be mixed by any DJ once it’s on wax. We’ve had a lot of our songs remixed by some of the top DJs in the industry. When we do our raps, we do the same techniques that rappers do. We sound check like a hip-hop band. One of our mentors, too, is The Roots. They’re like JAY Z to us, and we try to emulate a band like The Roots where we can play any form of music but we still have that raw, hip-hop, urban sound. That’s how we try to do it with our instrumentation.

L+T: Have you all talked to or played with The Roots before?
LL: Yeah, we’ve been fortunate enough to do a couple shows with them. They did a tour that brought them to New Orleans on two separate occasions and through the blessings of God we were the opening act, so we met them. Questlove and those guys were awesome; we really dig each other. Black Thought, as always, his raps are so innovative and provocative. They were amazed, I think, at our sousaphone. I don’t wanna say they stole that idea, but I know we were doing it first [laughs]. We don’t have an electric bass, it’s just a tuba sousaphone. After we did the shows with them, I saw they had Tuba Gooding, Jr. It’s all good because we’re all one in the struggle.

L+T: Being a brass band coming out of that New Orleans jazz tradition, and bringing in major hip-hop elements, how have you all been received over the years?
LL: That’s a good, loaded question. We actually received a lot of criticism early on from the purists of jazz and, more specifically, our own brothers and sisters in brass band music in New Orleans because they were so used to it being the way it was, and not having that big thump with the bass and the hip-hop. It was kind of foreign to them. We really had to start from ground zero. [We had] to let it sink in, and eventually they’ll see what we’re doing. Low and behold, God has blessed us to be at this level. We’ve still got a long way to go though.