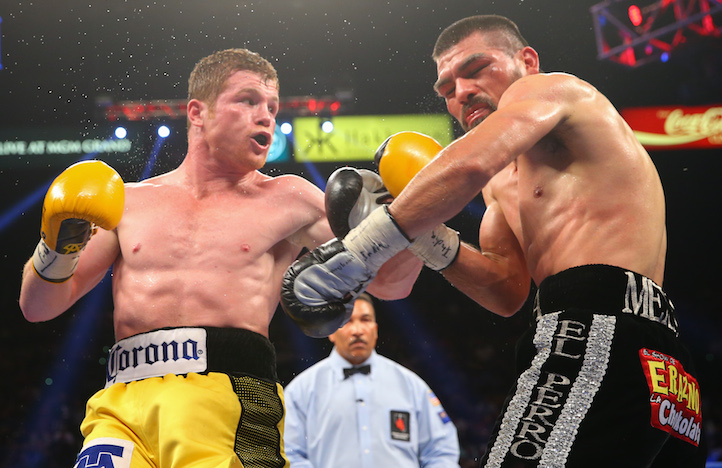 On September 9, 2013, Saul “Canelo” Alvarez quite possibly had the worst night of his life. The 23-year-old redheaded Mexican was considered to be a major threat to the kingdom that Floyd Mayweather ruled with an iron fist. He was younger and bigger than Mayweather and was the type of talent that people figured Mayweather would avoid during his farewell tour.

But when the two met in the ring, it was experience that proved to be the biggest factor as the then-36-year-old Mayweather gave Canelo the boxing lesson of a lifetime. It was certainly a case of a talented fighter biting off far more than they could chew. In front of a sold out arena, Mayweather embarrassed Canelo with blinding hand speed, superior footwork and impeccable defense.

Canelo’s first professional loss came with a great deal of questions as to whether he was really the future of the sport and if the Mayweather schooling would make him a better fighter or shatter his ego. Canelo wouldn’t get the opportunity to lick his wounds for long as his next fight was booked for March 8th, as he would headline his own pay per view against Alfredo “El Perro” Angulo.

What Angulo represented was a complete departure from what Alvarez faced with “Money.” Where Mayweather was a phantom, Angulo would be a charging bull. Some said it would be the perfect fight or Canelo to get his career back on track. Others weren’t so sure that Alvarez could deal with Angulo’s high-pressure attack. Either way, Alvarez had his opportunity to prove that his rise was far from a fluke. “I learned a lot from the Mayweather fight, not only physically, but mentally,” Canelo said in the weeks leading up to the fight. “It was a great learning experience. This camp may not look that different, but I’ve been applying everything I learned into this camp and trying to refine some of the things I do.”

One thing that fans could rest assured of was that this wouldn’t be the same chess match that Alvarez dealt with against Mayweather. After all, two Mexican fighters in the ring together normally produce fireworks. 14,160 fans at the MGM would get what they asked for; although not in the manner they probably expected. For one, Canelo — who was fan favorite heading into the Mayweather fight – had become the villain as boos cascaded throughout the arena when the young Mexican made his ring walk. But perhaps more shocking than the sudden change of heart by the fans was the fact that “El Perro” appeared sedated and lost his bite.

A determined Canelo likely sensed the subdued Angulo and wasted no time imposing his will on Angulo. Sledgehammer power shots ransacked Angulo, who had very little to offer in a lethargic first half of the fight. The blistering assault from Alvarez was impressive as he landed 37 of 62 punches in the first round and the trend would only continue. But arguably even more impressive was Angulo’s ability to absorb so many power shots. Truth be told, Angulo could have been an extra on AMC’s The Walking Dead as he methodically pressed forward despite eating a tremendous amount of leather. His face a grotesque mass of swelling, it seemed obvious that the fight would be halted soon. Meanwhile, Alvarez looked as sharp as ever. The schooling that Mayweather gave him had only polished the diamond. The redheaded Mexican even deployed a Mayweather shoulder roll with success. 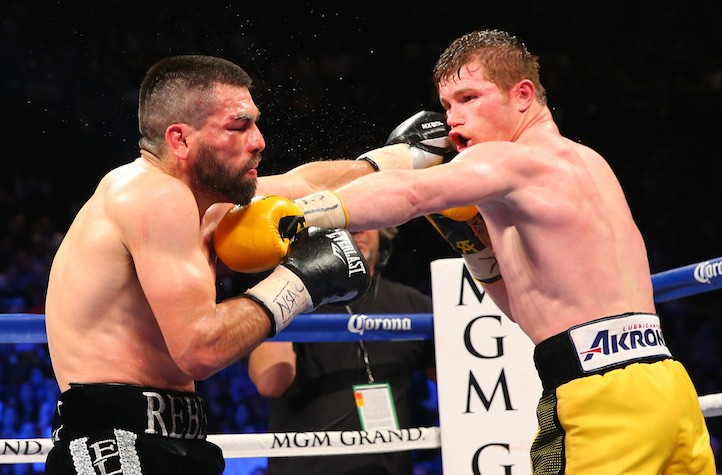 But then something special happened.

In the 8th round, Canelo’s hands became some type of human defibrillator as the wicked power shots that would have sent any other human being into a coma brought “El Perro” back to life. What was expected to take place in the first stanza surfaced in the fight’s 3rd act. The two opponents uncorked hellacious punches with bad intentions in an early candidate for round of the year. Each fighter begged for more punishment before dishing out their own as the crowd roared in approval. With a fight that was so terribly one-sided, this was the round that epitomized the tagline of “Toe To Toe.”

The act of machismo endeared fans to Angulo but Canelo was still having his way with his opponent. A brutal barrage of punches from Canelo continued to find their home but Angulo simply wouldn’t go away heading into the 10th round. And then, all of a sudden, just as the action was getting good, referee Tony Weeks stopped the fight. A scintillating uppercut nearly tore Angulo’s head from his shoulders and Weeks saved Angulo from further damage and likely granted him the ability to speak to his daughter without slurring his words.

As impressive as Canelo’s performance was, a shower of beers from an infuriated crowd coupled with deafening boos superseded the performance. “I fought his way of fighting in his territory and I was happy fighting toe to toe with him,” Alvarez said as the crowds’ boos increased in volume. But it’s not like Alvarez wanted the fight stopped. He actually appeared to enjoy dishing out a savage beating to Angulo. “The referee stopped the fight,” he continued. “He’s the law of the ring. I could have fought another 10 rounds, but [the] referee stopped the fight. It’s not my problem.”

The stoppage was certainly for the best though as Canelo landed a ridiculous 64% of his power shots (197 of 309) on Angulo (22-4). The performance proved that Canelo was back, although he would suggest otherwise during the post fight press conference. “The promotion was ‘The Return of Canelo’ but Canelo was never gone. I’m still here,” Alvarez (43-1-1, 31 KOs) said.

With the Mexican superstar already plotting a summer return to the ring, it is evident that Saul “Canelo” Alvarez is here to stay and ready to carry boxing’s torch once a certain man named “Money” decides to call it a career. 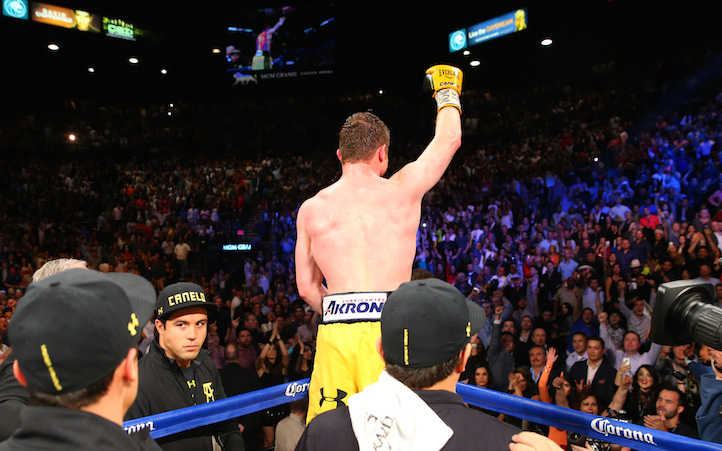