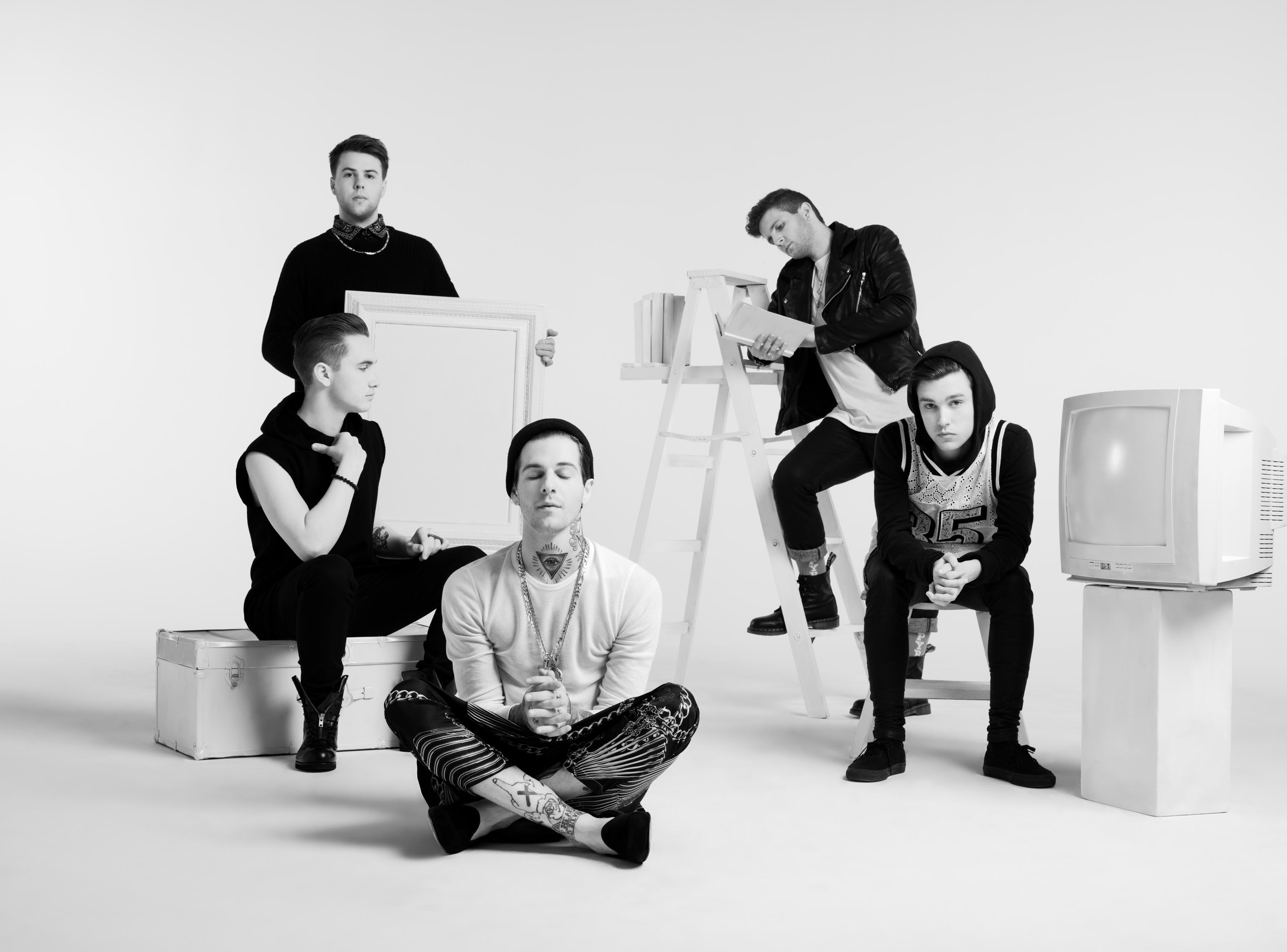 Success rarely happens overnight, even though to the masses it may appear as such. It can be quite a journey, which has been the case for rock band The Neighbourhood. First coming together in 2011, the fruits of their labor have sweetly ripened, releasing I Love You, they’re full-length debut, in April 2013. Since then, the California natives haven’t lost any momentum, as The NBHD has enjoyed a sold-out national tour, as well as recent gold certification for “Sweater Weather,” the album’s second single. A big piece of their success has been an unwavering vision that’s a product of a tight-knit order of operations.

“Everybody that’s part of our team, from our tour manager to lighting director to video director are all friends. We don’t take in outsiders too much,” says Jesse Rutherford, the group’s vocalist. He’s joined by Jeremy Freedman (guitar), Zach Abels (guitar), Mikey Margott (bass) and Bryan Sammis (drums).

Life+Times caught up with Rutherford to discuss the group’s vision and their road to success.

Life+Times: What’s your journey been like thus far? You started off as an unknown group a couple years ago, and now you have a gold Top 20 record, you’re headlining sold-out shows, and more
Jesse Rutherford: We started out as really good buddies. We were all homies and knew how to play music, and met each other through different bands we were in. We were friends for a few years and finally decided to make music together. I came to the boys and was like, “Yo, I have this idea. I think you guys can help me.” We wrote [some] songs and “Sweater Weather” was actually the first song we ever wrote. We wrote that and felt like we were kind of onto something, then we kept going and going. This whole thing has really turned into our life. It’s a complete vision, a complete package. We’re excited. It’s exciting to see that the songs you’re writing are connecting with people. We’re moving up charts and all that, but we still have a lot to prove.

L+T: Are you surprised to see the continued success of “Sweater Weather”? It came out in 2012 and was on top of the alternative charts for a while, but has just recently cracked the Top 20 on the pop charts.
JR: To keep it real with you, [for] some people this whole process of creating music, “making it,” having a song that’s hot on the radio could come as a surprise, but when we wrote the song I think we knew we had something special. So the fact that so many other people in the world feel that way about it, to be honest, it just makes me feel like I’m not crazy. It lets me know that when we wrote the song and looked at each other like, “This is dope,” we weren’t just in our own crazy little world. [“Sweater Weather” cracking the Top 20] was a nice little push. Having a gold record is a very sweet push from the world. Of course it feels good and incredible, because I’m getting recognized for being myself. As a human being, that’s all one could ever want.

L+T: What is it that you think people are connecting with?
JR: It’s really straightforward. There’s no gimmicks. It’s who we are. Everything that I say in a song is actually me. So, say someone wanted to hate our music, that means that they hate me and my friends, because it’s purely who we are. It’s raw. I think this world, right now, just needs something that’s straightforward, raw, and honest. We all want to be lied to deep down. We want to be told that we’re loved and are beautiful, but that’s just not fucking reality. And everybody is so scared of raw honesty. I think that’s why people really are connecting, and because we have a really strong vision. We do everything in black and white and we stick really strong to it. For example, the other day, we turned down The Tonight Show With Jay Leno because they wouldn’t do it in black and white. We’re like, “Thanks for the opportunity to be on TV, that’s really cool, we want to be there, but unfortunately, we can’t compromise our vision.” In a very respectful way, of course.

L+T: Talk about that black and white theme and why you all have been so steadfast in holding to it.
JR: It started the same way the songs and the name of the band did. We wrote songs, came up with the name and then from a marketing standpoint… that’s kind of my world, an angle that I take very, very seriously and get excited about… I do all of our artwork and designs, everything you’ve ever seen is directly from us, a product off of our laptops. That’s how we do shit. [So, I asked]: “What colors go along with our music?” I just wanted to think about that. And I think it’s black and white, I think it’s real, straightforward. There’s no gray area. It’s me and my fucking homies getting together and going, “Hey, you play that, I’ll play this, you do that, and we’ll make five parts come together into a good song.” It felt like it went with our music and, to be honest, it’s really a lot more than that. It’s not just a color scheme. Black and white is an important thing in our world, be it culturally, division of ideas, there’s so much that is black and white and separated because of contrast and balance. It’s kind of unfair and I think the world needs to get the fuck over that and deal with these two things together.

L+T: The most recent video, for “Afraid,” is pretty dope…
JR: When it comes to the videos, we develop ideas with two of our best friends who direct them. Together, they’re a production team called Ends. They’re just homies from our neighborhood, no pun intended. The “Afraid” video is really important whether anybody realizes it or not. It’s an important piece of imagery, art, whatever you want to call it. Like I’ve been saying, it’s raw and real. We’re being very vulnerable, literally. We’re not holding anything back. For me to do what I did in the video, I just wanted to show people, “Yo, I’m giving you my absolute vulnerability.” If there’s nothing else, I want to give the world so much of an honest me, that it’s almost hard to swallow sometimes. People want to be lied to so badly and I fucking just won’t do that. With the platform and the opportunity that I have, who am I to be on this large scale with this gold record, and then hide who I am? I don’t think that’s fair. I took on the responsibility, so that’s what we’re going to carry.

L+T: How important is it that you all keep everything in-house? What freedom has that granted you?
JR: It’s one of the biggest blessings in the entire world, to be real with you. I feel responsible for carrying this torch. When it comes down to the team that we have, it’s a very important part of that. You look at T.D.E., G.O.O.D. Music, Maybach Music, these guys are doing shit with their crew. They don’t need anyone else. They’re going, “Listen, we’re going to create this on our own, and then when you’re ready, world, you’re gonna grab it. We’re not going to wait for you.” That’s the reason that bands aren’t cool nowadays. Nobody’s going the extra mile to do all this shit. That’s why you hear about bands getting screwed by labels, and rappers getting big advances. That’s how you’re supposed to model your business. That’s a true grind and reason to do this, because it’s not being selfish. It’s taking your family with you. We taught our bass player how to play bass for the band, just because he was the homie. We’re like, “Yo, you’re too close to us and we need you on the bus. Just pick this thing up and we’ll teach you how to do it.” And now he’s writing bass lines. That’s just faith in someone you love.