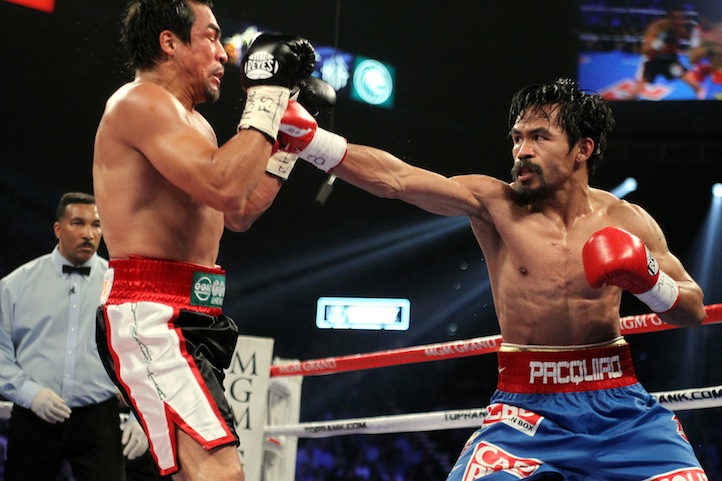 For almost four years, Manny Pacquiao has looked invincible. He has wrecked the boxing careers of Oscar De La Hoya, Ricky Hatton, Miguel Cotto, Shane Mosley, Antonio Margarito, Joshua Clottey and David Diaz while smashing records including being the first eight-division world champion. He’s been a whirlwind of punches that nobody has been able to deal with inside of the squared circle.

From March 16th, 2008 to November 11th, 2011, Manny Pacquiao has fought 67 rounds. He has arguably lost three rounds total according to the official judges’ scorecards. What he has accomplished against strong competition has earned him the right to be called the “Fighter of the Decade” for the 2000’s by the Boxing Writers Association of America. His monumental run that saw him win titles at lightweight, light welterweight, welterweight and super welterweight had many talking about Pacquiao perhaps being one of the greatest boxers of all-time; right up there with Muhammad Ali, Joe Louis and Sugar Ray Robinson. For that stretch of three years, seven months and twenty-six days, Pacquiao was just that damn good.

You may wonder why I cited those particular dates to document Pacquiao’s historic run. Well, the reason why is because on March 15th, 2008 and November 12th, 2011, Manny Pacquiao was nothing more than a mere mortal when he faced his personal kryptonite known as Juan Manuel Marquez. Boxing’s superman was nothing more than a Clark Kent to the Mexican fighter, who will certainly become a future hall-of-famer. When the two initially met on May 8th, 2004, Pacquiao’s legend was just beginning as he had shocked the boxing world by destroying Mexican legend Marco Antonio Barrera to win WBA, IBF and The Ring featherweight titles. Facing another tough customer in Marquez proved to be difficult and laid the foundation for what would take place in Vegas on November 12th. When Pacquiao dropped Marquez three times in the first round of that fight, everyone counted Marquez out.

“I’m not sure Juan Manuel will be able to get up,” HBO commentator Jim Lampley stated after Pacquiao dropped Marquez for the third time. Fellow commentator Emmanuel Steward echoed those sentiments by saying, “It’s over.”

But it wasn’t over.

Marquez heroically willed himself back into the fight and won a majority of the remaining rounds to earn a controversial draw where both fighters strongly felt they won the fight. Neither side was wrong in that assumption. Fast forward to March 15th when yet another close fight was won by Pacquiao via split decision by the slimmest of margins (115-112, 114-113 and 112-115). Again, many thought Marquez won the fight, but alas, it would be Pacquiao taking the decision and beginning his historic march through the weight classes and into boxing’s history book.

When the two met on November 12th at the MGM Grand Garden in Las Vegas, a different set of circumstances hovered over the fight. Since losing to Pacquiao, Marquez had been brilliant in his wins against Juan Diaz, Michael Katsidis and Joel Casamayor. However, being wiped out by Floyd Mayweather at a catch weight of 144 lbs lowered his stock a bit. Meanwhile, Pacquiao became a world beater whose punching power followed him through the weight classes. When the two signed the dotted line for a third fight at a catch weight of 144 lbs, most assumed that Pacquiao would be too big, too strong and too fast for Marquez. The Mexican was a 7-1 underdog the night of the fight, but just like the HBO commentators jumped the gun in their initial meeting, Marquez proved everyone wrong yet again.