“Two heads are better than one,” is a cliché statement, but one that is truly brought to life by the Lucas Bros. In their case, the two minds really become one. New Jersey-born, North Carolina-raised twin comedians Kenny and Keith Lucas who have since become Brooklyn residents have been on a tear performing comedy in almost every medium imaginable. They started with – and still do – standup; did Late Night with Jimmy Fallon; appeared in on the big screen in 22 Jump St.; found roles on Arrested Development among other television shows; hosted a web series, The Super Late Morning Show; and created a live animation series, Lucas Bros. Moving Co., that is just beginning its second season.

Now, their sketch comedy series, Friends Of The People is set to premiere on on TruTV on October 28th. Life+Times talked with the brothers about their latest endeavor, working together and more. 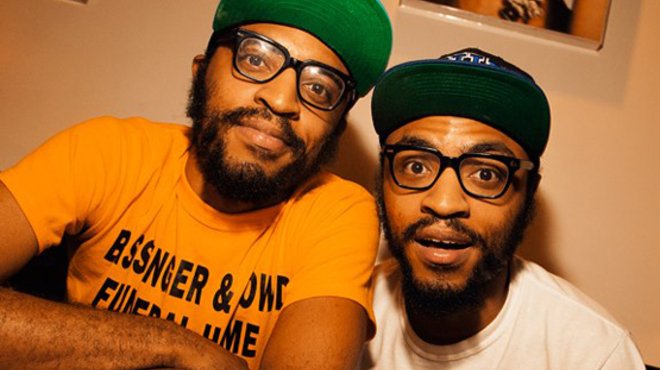 Life+Times: What is Friends of the People and where did the idea come from?
Keith Lucas: We were at the Montreal comedy festival Just For Laughs in 2012 with Jermaine [Fowler], and we were driving back from it and thought it would be a great idea if we just started doing some sketches. Why not? It’s another avenue to get your comedy out. We were just tossing around ideas and we sent an email to our manager trying to get the ball moving. We were like, “Can you put together a team and we try to start a sketch show?” Our manager assembled the team and we came up with the first pilot sort of on a whim. It wasn’t well thought-out. It was a really bad pilot, to be honest, but it got sold. Comedy Central bought it and we produced it and it was awful, and it didn’t get picked up by them. We thought that was the end of that, but TruTv decided to give us another shot. They let us re-shoot the pilot and then picked it up. So, we’ve had pretty much two-and-a-half years working on this project and I think the first episode is what we initially wanted to get to but we just didn’t know what the fuck we were doing. With Neil [Punsalan], our show writer, we were able to tap into everyone’s voice and I think you see that in the show. Each sketch is a different kind of comedy: some absurd stuff, some traditional character work, it’s a buffet of comedy.

L+T: A couple of the early clips used Family Matters and Pardon The Interruption as the source material.
Kenny Lucas: I think we try to draw from what we watch in real life. We watch Pardon The Interruption” and we were also big fans of Family Matters, so it’s just something that’s in our psychology. There’s a lot of funny stuff in them.
Keith: Yeah, particularly with PTI, you see those guys and they’re not necessarily screaming at each other, but it’s very intense and they’re always talking about just sports.
Kenny: We just thought, “What if we were agreeable and talking about even less meaningful stuff?” Let’s make it even more mundane and see what we can get from that, if there’s any comedy in that. We try to find the opposite of things and see if you can get comedy out of it. With the Urkel sketch, any chance we get to mock Hollywood, we want to do it.

L+T: Lucas Bros. Moving Co. is just starting it’s second season, too.
Keith: It’s my favorite thing to work on. I think it’s the truest. There’s a few things that I don’t think we could have accomplished in sketch or any type of live action because they’re ideas that you just can’t do because there’s a limit to the budget. It’s been a fantastic project and I hope that this next season people enjoy it a lot more.

L+T: You all have done animated shows and now sketch work, in addition to movies, standup, web series, etc. Especially now for comedians, there are more and more outlets. What has been you all’s preferred medium?
Kenny: I think they’re all great, but I would say animation has been the most fun. Standup has also been great.
Keith: Animation because of the ideas you can explore, there are no limits, and in standup, you can just take it directly to the people. I always say standup and animation are our clearest voices. That doesn’t mean I don’t like the other ones, but with sketch you have to go through a process. It can be limiting sometimes, but with standup and animation, you have free reign to explore your ideas a little bit more.

L+T: How did you all get involved in comedy in the first place?
Kenny: We were pretty quiet kids, not really class clowns. I guess Keith was a bit more of a clown than I was, but that’s not saying much. We both were academics, we went to law school preparing ourselves for careers in law. We both hated it and then decided we wanted to do something more collaborative and creative. We were initially gonna do screenwriting but we got the standup bug. We started doing some open mics and worked our ass off.

L+T: Most people don’t have brothers – let alone twins – to work in conjunction with. How has having two minds to bring ideas together helped you all creatively?
Keith: That’s the biggest advantage we have over any other comedian. I get to work with a person who I believe is the smartest person that I know. He’s able to touch on things that I’m not always aware of. It helps you cover more ground. You have someone else who’s doing the research and putting in the work and the time and is dedicated to it. I think it’s made my experience much more productive.
Kenny: It’s a more democratic process, so when an idea is presented, we get a chance to debate it. Ultimately, we take the thing that’s best for the act and I think that’s a huge advantage.
Keith: You’re not wasting as much time. It’s much more efficient. When you have someone telling you, “That’s not the way to go,” you just don’t waste time on it. I trust his judgement more than anybody. Or on the flipside, he always encourages to keep going forward [if it’s good]. You have a person that’s giving you advice right then and there. You always have an audience and that’s critical.

L+T: It seems like you all have pretty much figured out your style. Talk about going through that process and getting to a point where you really feel comfortable.
Kenny: That’s a great question. It’s about trusting the process. I don’t know if we’ve figured out who we want to be, but I know as we’ve invested ourselves more into the process, we’ve gotten better.
Keith: It’s tough because the comedic voice is so pivotal for a comedian’s career, but finding it – I don’t think you find it, I think you cultivate it – is the greatest challenge, and I think we’re still in the process of cultivating. I think the animation show helped out a lot because it’s literally our voice – we were able to explore ideas and push our minds to the maximum level. I also think what’s fundamental to the process is experimenting with different mediums. I think that helps you become more comfortable, doing different things. We’re not confined. In terms of comedy, if you want to be the greatest comedian you can be, you have to explore and do different stuff. You have to watch improv, you have to watch sketch, standup; consume it all just to see what you’re good at and bad at.