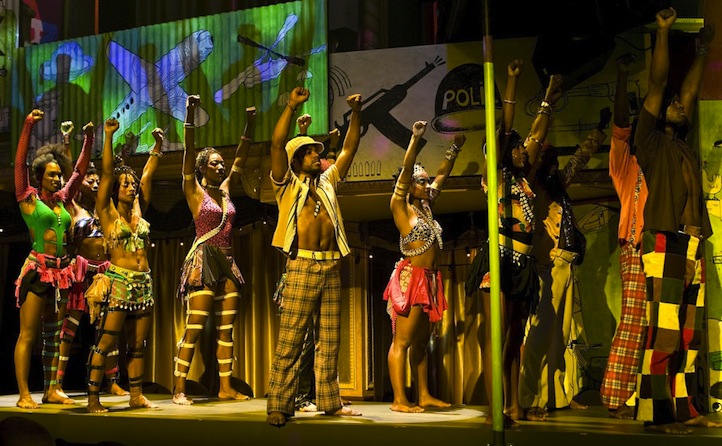 In entertainment, many great artists find just as much success and popularity posthumously as they did when they were living. Such is definitely true in the case of African musical pioneer Fela Kuti. It was over four decades ago that he developed Afrobeat — combining traditional African music, popular American music, Cuban music, jazz and funk (especially James Brown‘s guitars) — using his music to speak to and lead the people of his native land Nigeria. Today, his timeless music remains as groovy, rich and powerful as ever, sampled throughout hip-hop, though many still remain oblivious to the man known as the “African James Brown.”

However, since 2009, thanks to director Bill T. Jones, producers Will Smith, Jada Pinkett-Smith, JAY Z and others, the story of Fela has been available on Broadway to educate and enlighten the masses. Running about two-and-a-half hours, FELA! does a tremendous job detailing the complex life of Fela Kuti, who, at the height of his popularity, was more powerful than the Nigerian government. The show has traveled from New York to Detroit, Philly, Europe, Nigeria and elsewhere, and recently Chicago. There, Life+Times was able to catch up with Nicole Chantel De Weever, who plays one of Fela’s wives, as well as lead conga player and hand percussionist, Yoshi Takemasa, to talk  about the success of the play, and the life and influence of Fela Kuti.

Life+Times: Why has it been important to bring Fela’s life to Broadway and tell his story?
Nicole Chantel De Weever: Fela Kuti is a brilliant musician, the creator of afrobeat, who was able to use his music as a weapon. His music spoke against the Nigerian government, it spoke for the people that had no voice, and I feel like his songs and his music and his message are very relevant for the times, not only for Nigeria, but on a global level. As you look around now and you see the circumstances that exist not only for people of color, but around the world — discrimination, oppression, wars — he has touched on everything in his music. It’s very important that the commercial stage has something that has a message. Broadway needs a show that makes the audience think intellectually and creatively. They need to have some kind of stimulation, knowing that there is more to art and stage performance than entertainment. You should leave the theater thinking about what your life is about and what you should do to make a difference, and I think that’s what the show does. 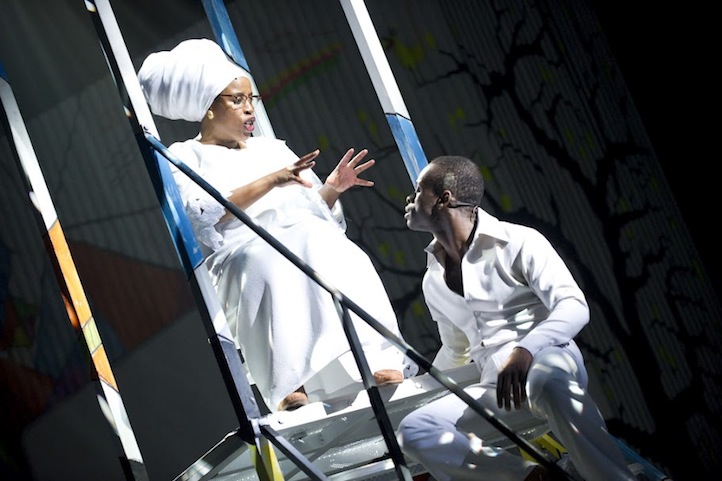 L+T: How has it been to witness the success of the play?
NCDW: It has been incredible. The subject matter is very politically driven — it’s not your typical Broadway show — so you know that you’re gonna come across resistance, because people are very into traditional music theater. So, how do you shift their mind a little bit and tell them, “Hey, here’s something different?” When you enter the show, it’s in a concert setting — and of course, the content itself is very heavy, it’s talking about corruption — and then you have all of these beautiful Black bodies on stage. In many Broadway shows, you have the token Black person on stage. Here, you have a body of Black people talking about politically conscious messages and shaking their butts on stage. You’re not ready for that as a typical Broadway audience. We’re saying, “Here we are, embrace what it is, it is true.”

L+T: Were you familiar with Fela’s music before becoming involved with the play?
NCDW: Yes, I was. Actually, I learned about Fela in college. I lived in New York and went to school in New York, and I used to go to all the underground house parties, so I would always hear Fela Kuti’s music, but I didn’t really know the depth of his music at that point. I loved the sound of it, I danced to it, but I never really listened to the lyrics. It wasn’t until I got into the show and worked on this project that I realized how politically charged his music was. Even the ones that you really shake to and dance to, you don’t really realize there is something being said that is significant. You kind of lose that. Being a part of this production has really opened my mind and educated me about the man himself.
Yoshi Takemesa: Yes, I was. The first time was 1996 in NY. I was introduced to “Zombie” by my friend from Mali who was always around the legendary Fareta School of Dance and Drum in NoHo, NY, where I was studying Djembe. The second time was also in 1996, by my friend from Japan who was my bandmate playing saxophone. He had a Fela video, “Live in Amsterdam,” that he gave to me when he went back to Japan for good. The third time was in Cuba in 2000, where I was visiting to study drumming and their culture. I saw Yoruba culture in Cuba, and was impressed by how deep it was. As an outsider of music and culture, I was not clear about any connection between Africa and America until I got to see Yoruba culture in Cuba. This woke me up. I found my belt line — my vision of musical journey — between Africa to America there through the Carribean. When I came back to NY, I saw an ad in Village Voice regarding an audition for an Afrobeat band and I joined them.

L+T: Talk about the place and influence of Fela’s music in America. How did American music, especially funk, influence him?
YT: To me, Fela’s afrobeat concept is more like big band jazz. I believe James Brown got a lot of influence from big band jazz as well. I believe that is their common language. Of course, they were both influenced by each other, that’s a fact, but spiritually, they were connected through the same concept before they ever even met.
NCDW: A lot of hip-hop artists have used his music, whether it’s Common Sense, Mos Def, Jay-Z. So many artists have used his music, I feel like people are familiar with the song, but didn’t necessarily know it was Fela. Living in America, I’ve realized that as a culture, a lot of people are not aware of world music here. A lot times, they listen to their own music, which is fine, but Fela falls into the category of world music. When we went to Europe and performed, he was huge, and they’re very aware of world music and African music, so there’s more of a following there than here. [In Europe], a lot of people are already conscious of his music, so here [in America], you’re really educating people about the man. 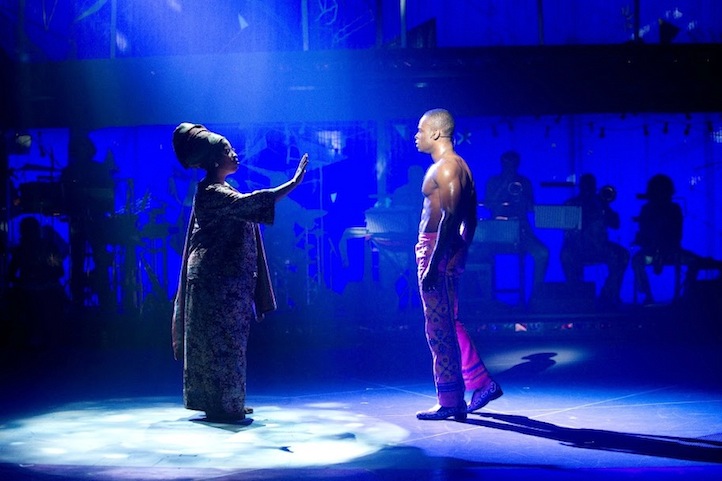 L+T: Are you surprised Fela is not more well-known in America?
NCDW: I am surprised because he traveled all over the world. He traveled a lot through Europe but he traveled through the U.S., too, where he actually fell in love with a very significant woman by the name of Sandra Isidore, who was from California. She changed and shifted his course, in terms of his message in his music. She educated him about the Black Power Movement, she educated him about Black writers and pretty much taught him how to be his African self.

L+T: How is it to dance to Fela’s music, the horns, drums, etc.?
NCDW: I’ve done a lot of musical theater, and this music is like no other in terms of performing to it. You could be deadbeat tired before the show, and as soon as the band starts that music, it’s like there’s a rush because the music is just so moving. From the time it starts, you want to move, you want to shake, you want to dance. It fills that energy that you need to do a show every night.

L+T: Talk about the jobs Bill T. Jones (director and choreographer) and Sahr Ngaujah (who plays Fela) have done in their respective roles.
NCDW: Bill T. Jones is a renowned modern dance choreographer that is known to take on complex and significant projects. Everything that he touches, in my opinion, is brilliant, because he’s not afraid to tackle controversy. Fela happens to be that type of man — he’s very complex, as well as a genius, and I see Bill T. Jones in that same light. He was not only the director, he was also the choreographer. That’s a lot of responsibility. Sahr Ngaujah and Adesola Osakalumi — they both share the role of Fela — I have watched them both grow into this role. As soon as they get on stage, they transform into this character. I’ve seen how they’ve studied, watched every single documentary, sung every song. In terms of character study and development, I’ve watched them grow and unfold into this man, and it’s amazing to see someone grow into a character.

L+T: What is your favorite Fela song?
NCDW: I have a few. One song that I really love is “Egbe Mio.” I also love “Water [No Get Enemy]” — gotta love “Water.” I think everybody loves “Water,” and I love “Zombie”, too. But I love Fela’s music, in general.