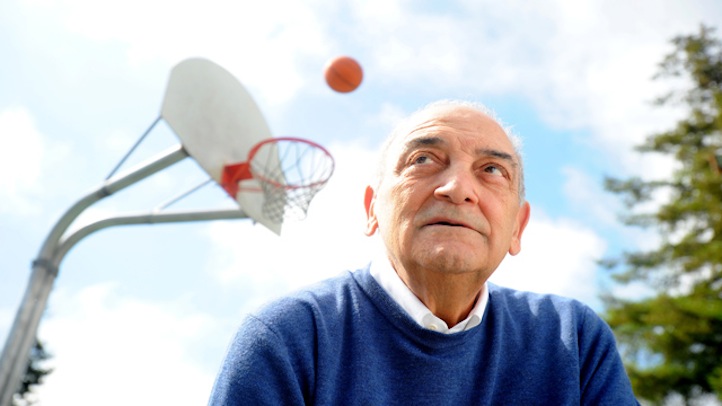 If you can believe it, the players in the National Basketball Association weren’t always walking billboards for sneaker companies. Once upon a time, players didn’t have sneaker contracts. There were no sneaker commercials. And Nike, Reebok, Adidas, Converse and every other footwear company on the planet weren’t shelling out millions of dollars every year to get their logos out into the world. Outside of a couple of signature sneakers, it was, more or less, a completely untapped market.

About 30 years ago, all of that changed thanks to the tireless efforts of marketing executive Sonny Vaccaro, now 71, who helped create a culture around sneakers that turned some superstar athletes—and even just star athletes—into high-profile celebrities with million-dollar endorsement deals. That’s not all that Sonny’s done, though. Over the course of his career, he’s also changed the culture surrounding high school basketball by holding all-star games that have helped put the spotlight on everyone from Shaquille O’Neal to LeBron James and become one of the go-to guys for basketball commentary.

As a result of all of that, a new HBO flick, ABCD Camp, starring The Sopranos actor James Gandolfini as Vaccaro, is scheduled hit the small screen sometime later this year. But before it does, we decided to take a look at the 10 ways Vaccaro has changed the game of basketball. It’s time to pay your respects to the “Grassroots Godfather.”

He signed Michael Jordan to his first sneaker contract.
This list could start and end here and we’re pretty sure you’d understand just how important Vaccaro was to the game of basketball. As a marketing executive at Nike, Vaccaro helped ink His Airness to his first endorsement deal. Safe to say, that turned out pretty well for everyone involved.

He started the first national high school basketball game.
Before the birth of the Internet, there wasn’t a really reliable way to keep tabs on the level of talent that existed in high school basketball. Enter The Dapper Dan Roundball Classic, which Vaccaro created back in 1965. It lasted for more than 40 years and featured players like Shaq, Kobe Bryant, Vince Carter, Patrick Ewing and more. For the first time ever, hoops fans could check out the best of the best in the high school ranks every year. It also helped birth some of today’s high school showcases like the Jordan Classic.

He founded the elite ABCD Camp.
Just about every city in America has a basketball camp in the summer. How then, Vacarro thought back in the early 1980s, could elite players get exposure for themselves, if every Joe, John and Jim across the country was crowding into summer camps? The answer was Vaccaro’s ABCD Camp, which he created in 1984 to help elite players get exposure. And players like LeBron James, Tracy McGrady and Kobe Bryant rushed to his camps in order to get it. Though Vaccaro closed up shop back in 2007, other similar camps like the LeBron James Skill Academy, which—not coincidentally hosted by Nike—has taken its place and continued the mission.

He got all of the major sneaker companies involved with his camp.
Want to know why just about every basketball camp that’s worth a lick these days is sponsored by a major sneaker company? Look no further than the aforementioned ABCD Camp, which was always sponsored by one of the big sneakers companies (see: Nike, Adidas, Converse or Reebok). These companies used their power and influence over the camp to help get their name out and drill their names and logos into the brains of players who could possibly sign endorsement deals with them later. In other words, the ABCD Camp made basketball camps big business.

He made summer leagues count for something.
Many years ago, high school basketball was played from November through March—and then put on the shelf until the following November. Vaccaro and others like him saw the opportunity for summer ball to make a real difference for many players. So while he was busy running his ABCD Camp, others ran similar camps and summer leagues during the offseason. This helped players improve dramatically and also made college and pro ball more popular than ever as well as people started to connect with players long before they reached the NBA.