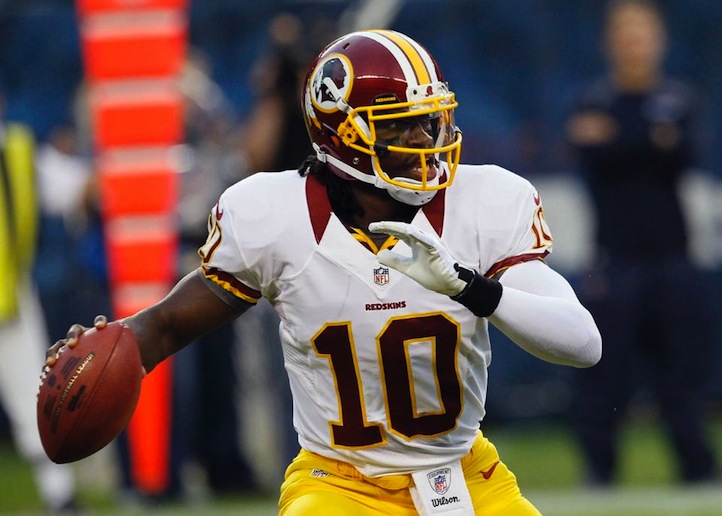 With the start of the 2012-13 NFL season set to kickoff tomorrow night, as the reigning Super Bowl Champion New York Giants open up against Division rival the Dallas Cowboys at MetLife Stadium, one might expect headlines to reflect the start of Eli Manning and the G-Men’s title defense. Instead, what has captured the attention of football loving Americans this season is the fact that an unprecedented five NFL rookie quarterbacks will start the season under center for their respective teams in Week 1.

This was supposed to be the season that the most touted quarterbacks out of the 2012 NFL Draft, Andrew Luck and Heisman Trophy winner Robert Griffin III –the No. 1 and No. 2 overall picks, respectively– took over where Carolina Panthers’ quarterback Cam Newton left off last season and elevated their status to superstars. But with the kickoff to the season less than 24 hours away, the Cleveland Browns, the Miami Dolphins and the Seattle Seahawks have all taken a page out of Indianapolis Colts and Washington Redskins playbook to level the playing field.

Nothing illustrates the changing state of the NFL as well as the fact that five rookies will be starting at QB. It used to be that teams would almost never put a first-year player in a leading role, but over the years the win-now mentality and high level of collegiate development received by many quarterbacks have combined to transform and revolutionize the game, as we know it.

Russell Wilson, the top-ranked passer (119.4) in the NFL this preseason, garnered the starting quarterback job over former Packers’ backup Matt Flynn when he passed every test Seahawks head coach Pete Carroll put before him, including his stellar performance at rookie mini-camp in which he confidently handled every offensive snap. Wilson transferred from North Carolina State to Wisconsin prior to last season and had a 109-to-30 touchdowns to interceptions ratio, while displaying superb mobility (1,427 career rushing yards in college). Those were impressive numbers, but still, conventional wisdom says the rookie will struggle in his first-year at the pro level, and at 5’11, he stands as the shortest starting quarterback in the NFL. Yet, despite his height deficiency, Matt Williamson of Scouts Inc. thinks Wilson can put Seattle over the top in the NFC West. And ESPN’s Jon Gruden believes Wilson is the most pivotal unproven rookie quarterback. His intangibles outweigh his shortcomings and with a strong Seahawk offensive lineup, Wilson just might prove the experts correct.

Soon-to-be-29-year-old rookie Brandon Weeden’s size, strength and accuracy made him the more impressive quarterback candidate over former Cleveland Browns’ starter Colt McCoy in the preseason. Everyone was impressed besides Weeden, who spent several years trying to turn pro as a baseball player before he realized he couldn’t hit a curveball. Highly touted out of Oklahoma State, Weeden was once looked to be closing in on the Heisman and nearly had identical numbers to Luck last season (31-to-9 TD-to-Interception ratio to Luck’s 29-to-7), but failed to lead the Cowboys past Iowa State in one of the biggest upsets of the season. Moving into his rookie campaign in Cleveland, Weeden will have to improvise due to the lack of talent the Browns have at receiver. And with rookie running back Trent Richardson rehabbing from arthroscopic knee surgery, the ceiling on how much an impact he can have on the Browns in Year 1 is low.

Ryan Tannehill beat out Matt Moore for the Miami Dolphins starting position, after veteran quarterback David Garrard’s knee injury. Tannehill played with confidence this summer, showed a strong arm but made typical rookie mistakes reading defenses. Still, he was the best option for head coach Joe Philbin. If Weeden’s team is bad, Tannehill’s team is inferior. The Dolphins are a team of no-names, particularly at wide receiver. Even if Tannehill does everything right and possesses the intangibles to get it done, his crop of receivers won’t get open. Chad Johnson will be sorely missed.

With college offenses now more diverse than ever before, accomplished collegiate quarterbacks are more prepared to jump right into the fray than they were a decade of two ago. And coaches and GM’s will agree. In 2008, the Baltimore Ravens first-year head coach John Harbaugh drew criticism when he named then-rookie Joe Flacco –the 18th pick in the ’08 NFL Draft– his opening day starter during the preseason. There was also skepticism around Mike Smith’s decision to throw Matt Ryan –the third overall pick in that draft– under center that year for the Atlanta Flacons. Both rookies went on to lead their teams to the playoffs, with Flacco coming up a few plays short of the Super Bowl.

A year later, the New York Jets traded up to snag USC star quarterback –and Rose Bowl MVP– Mark Sanchez at No. 5 in the Draft and head coach Rex Ryan named the gunslinger starting QB prior to the start of the season. He later rewarded Ryan and Co. by leading the Jets to the AFC Championship Game becoming the fourth rookie quarterback in NFL history to win his first playoff game and second to win two playoff games. Similarly, in 2010, Sam Bradford momentarily turned the St. Louis Rams around, coming just one win shy of the playoffs, and winning the 2010 Offensive Rookie of the Year Award. And last season, Newton shattered just about every rookie passing record in NFL history, while Andy Dalton and T.J. Yates became the first rookies to face off in a playoff game since the 1970 AFL-NFL merger.

Now, it’s up to the NFL’s “Fab Five” to make their mark this season and try to carry their respective teams to respectability– and ultimately the postseason. Early returns on Luck suggest that he’s a prospect on par with former Colts’ legend Peyton Manning. RGIII’s personal talent level coupled with the Redskins’ offensive skill set will make him frontrunner for Rookie of the Year. Wedden has the maturity and ability to rise when it matters. And Tannehill will need…well, a miracle in South Beach. Like their rookie quarterback predecessors, expect the 2012 rookie quarterback class to turn some heads.

Which QB do you project to have a successful rookie campaign?