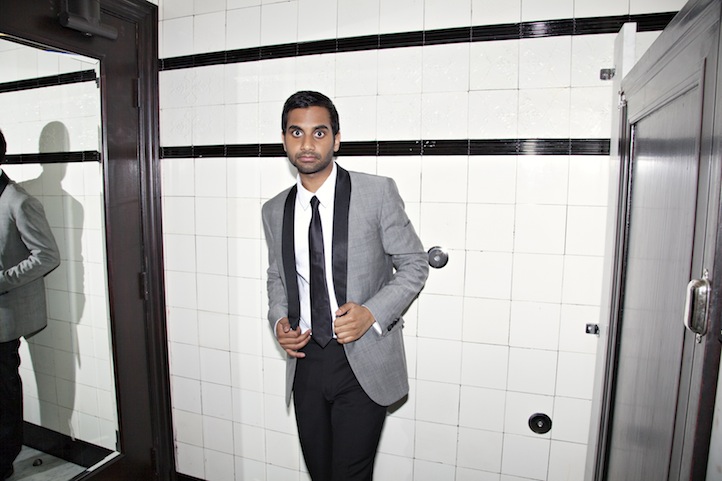 You can say that Aziz Ansari is having a pretty good day right. As the dapper Tom Haverford in NBC’s Parks and Recreation, Ansari’s a consistent scene-stealer and this past weekend saw him leading his own film in the comedy-caper 30 Minutes or Less. The 28-year-old comedian/actor is at the forefront of pop culture. So much so, that he even popped up in The Throne’s video for “Otis,” tucked in a chop-topped Maybach. Life+Times caught up with Aziz for a quick chat about his recent undertakings.

Life+Times: Your new movie is in theaters and you make a cameo appearance in a JAY Z/Kanye video, are you having your best summer ever?
Aziz Ansari: It’s been pretty good. I also had a really tasty donut for breakfast. Things are going my way.

L+T: There’s a part in the “Otis” video where you seem to be pantomiming Ye’s lyrics as he stands on top of that Maybach, did Spike tell you to do that or were you just in the moment?
AA: Spike just told me to be their hypeman and do whatever I felt like doing, so that was in the moment.

L+T: Tell us about your character in 30 Minutes Or Less. What attracted you to the role?
AA: I play a guy named Chet that helps his best friend Nick (Jesse Eisenberg) rob a bank. The movie is basically an action comedy like Pineapple Express, but it’s about a bank robbery. You and anyone reading this would enjoy it, I’M SURE. I was attracted to the role mainly because I liked the idea of doing a comedy about two normal dudes having to rob a bank.

L+T: Your role in Funny People introduced the world to the “RAAAAAAAANDY” character, where’s his album? Did the Justin Bieber incident make him shy away from recording for good?
AA: Yeah, that mixtape kind of got put on indefinite hold because Dave Sitek and I are both super busy trying to do a million other things.

L+T: Please explain to the ladies out there how you are “Dangerously Delicious.”
AA: That’s the name of my last standup tour! I love food. Btw girls that are really into food… Swoooooon.

L+T: It seems like you’ve become quite the clotheshorse these days. Who dresses better, you or Donald Glover?
AA:Haha, we’ve never actually talked about it, but clearly Donald and I have similar tastes. Much respect for my fellow NBC teammate for holding it down.

L+T: You are currently the greatest Desi comedian the world has ever seen, are there others worth note that’d you’d like to mention?
AA: I really like this comedian Kumail Nanjiani. He’s hilarious. Google his last Conan appearance. Hysterical.

L+T How annoying is it when interviewers try to do funny interviews with you because you’re a comedian?
AA: It can be slightly annoying.

L+T: You’re not fasting, are you?
AA: Is fasting when you eat delicious food whenever you want all the time? If so, then yeah, I’m fasting.