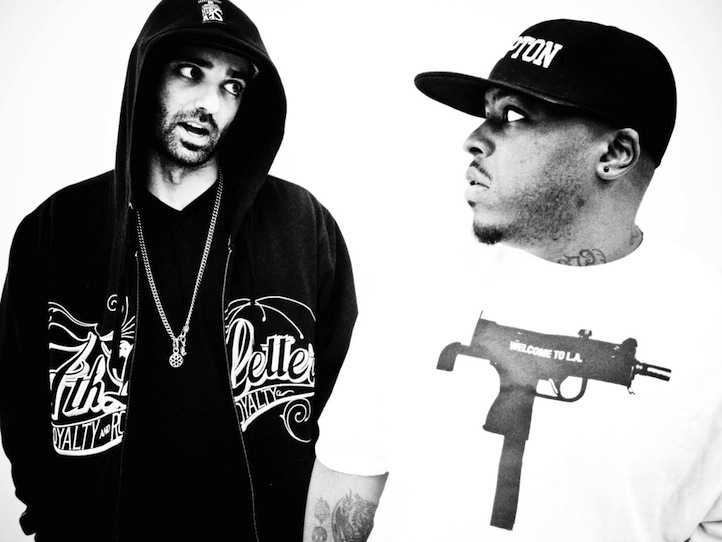 Life + TImes: How did you two hook up?
Killer Reese One: At a camp for aspiring astronauts.
Troublemaker: But really…we were on the same bill at The Roxy on Sunset. Reese’s group Bleu Collar was performing and when I saw him on stage, I knew we had to work together. We didn’t actually meet that night and it took nearly six months to track him down. My roommate saw him out one night and got his number, and the next day I was at his house playing him beats. He liked everything he heard and two weeks later we had an album.

L+T: What’s the music making process like?
TM: It’s fast. I usually start a beat, Reese comes to the studio and we conceptualize a song, and I loop it up for him to “write” to on his car ride home. [But] for the record, Reese does not write anything down. The following day he’ll come back and record his vocals, and then I produce the fuck out of the track based on his rhymes and turn it into a song. Rinse and repeat.

L+T: How would you describe the King Fantastic sound?
KRO: 80s gangster rap + 90s lyricism + the grimiest sound you can pull out of technology, with a sick sense of humor.
TM: The biggest, fullest, most braggadocios, PA blasting, vagina-tingling music anyone has ever heard.
KRO: Or that.

L+T: Hardcore rap and electro synths aren’t really natural partners…are they?
KRO: Of course they are. Listen to Ice-T’s Rhyme Pays.
TM: To me it’s a natural progression. But, maybe we should take the question as a compliment and say no, they aren’t. We are doing something that has never been done before. We are awesome.

L+T: How much has remix culture played in creating awareness for your music?
TM: It’s been huge for us. In the beginning, before we released our album, we remixed a few tracks that helped lead us to the audience for the album that we may have not gotten on the backside. Then, to offer dj tools, stems, etc., from our album and encourage fans and musicians to get involved has brought us thousands of new people. In addition, we hit up our friends to remix our tracks which then introduces us to their fans. This is where music is at now, it’s dope.

L+T: What exactly is “Westcoastsynthesizerbeachbumgangstermusic?”
KRO: A nigga that lives on the beach, that will blow your brains out, but happens to make synth heavy music.
TM: With a Greek Jew.

L+T: Who would you like to work with for next record?
KRO: Andre Nickatina and Trent Reznor.
TM: Who’s the biggest music executive in the business with the broadest vision?

L+T: What’s next for King Fantastic?
KRO: Shows, shows, and more shows.
TM: We also have a few more videos in the works for this album. Then we will get to more remixes and our next album. One more thing that needs to be said… Thank you to all of our fans and supporters, you allow us to live our dream. (King Fantastic)