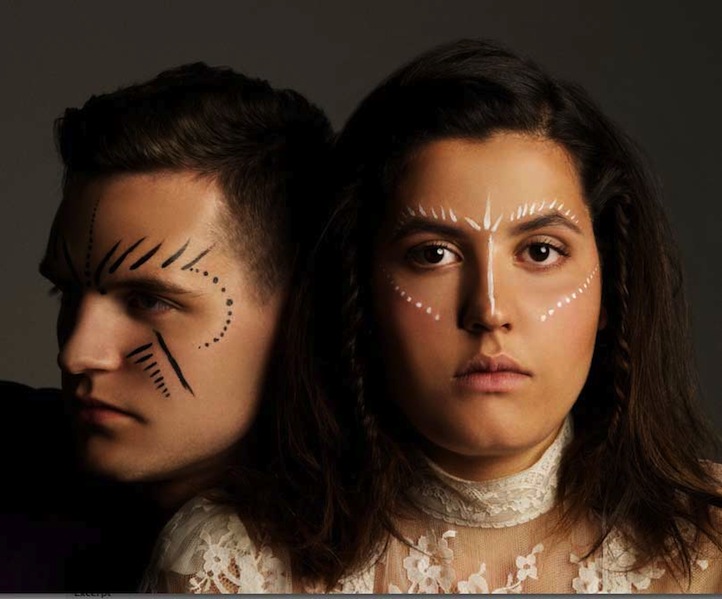 What do you think of when you see something about Denmark? Certainly you don’t think of incredible soul music. But that’s exactly what the dynamic duo of Robin Hannibal and Coco O. create under the guise of Quadron. The sweetness of Coco’s vocals over the lush melodies that Robin concocts catapulted their self-titled debut from the Scandinavian country in Northern Europe right into the welcoming arms of the states and satisfied those who yearn for good ol’ soul. While garnering critical acclaim, Quadron has remained grounded and thankful that their elegant vibes are appreciated. Life + Times catches up with Coco and Robin to discuss what the music scene is like in Denmark, their respective talents and what exactly is a Quadron.

Life+Times: Can you individually give some background on your history in music before linking up as Quadron?
Robin: It’s all kind of a blur to both of us. We woke up to Quadron.

L+T: Why did you two decide to branch off as a duo?
Robin: We started out making music for the fun and sheer thrill of it, as well as including each other in the various projects that we were doing. One day Coco was offered to be the leading “voice” of a soundtrack for a movie, but could decide on her own, what it should sound like, and who she wanted to work with. It seemed like a very natural decision to do that together. And that’s how Quadron was born.

What’s the meaning behind the name Quadron?
Coco: We have similar backgrounds since both of our fathers are of either African or African-American descent, and both of our mothers are Danish; which technically makes us Quadroons. It is a term that you also use in Danish, and in a country like Denmark that is still trying to build a multi-ethnic society, something that we are very proud of.

L+T: Being from Denmark, what influences did you each draw from?
Robin: In many ways we’ve had a lot of the same influences as Americans of our generation, since the majority of youth culture in Denmark derives from the states. The big difference is that we were watching it from a far, almost as standing outside a bubble looking in. That probably also made us a little more critical and independent.
Coco: Ever since I saw the movie Sister Act, there was no bigger dream than to attend a real American gospel choir. Unfortunately there isn’t anything remotely close to that in Denmark. That felt like a disadvantage at one point, but I learned to see it as a way of me to stand out, since there are so many brilliant church singers in the states.

L+T: What’s the music scene like in Denmark?
Coco: Besides plagiarizing everything that is hot in the States, we would like to think that we put a Scandinavian touch on all musical genres. Unfortunately that touch doesn’t own any soul (read: music). But there is good rock and electronic music. However, you can still mention Marvin Gaye or Minnie Ripperton and they wouldn’t have a clue of who you are talking about. Life as a musician is very privileged though. There are a lot of grants and support from the government, which enables artists and struggling musicians to get a better chance to develop and grow.

L+T: Robin, you’ve been making amazing music for some time now. The Boom Clap Bachelors albums were sonically amazing and Living With Owusu & Hannibal was extraordinary, what is your approach when it comes to each of these projects?
Robin: I like to make new challenges for myself. I feel that every record has to try and attempt something more than just a collection of songs. Boom Clap Bachelors was an effort to try and do electronic soul music with Danish sung vocals. Owusu and Hannibal was an attempt to mix and fuse a lot of different genres together and create a “sound.” With the first Quadron album I wanted to try and make more room for the vocalist and make a sound that would also translate well into a live setting. Also with more of a focus on pure emotion, which Coco is great at accomplishing.

L+T: Coco, lyrically the album is very on point. Songs like “Far Cry” make me curious as to how much personal experience bleeds into your songwriting.
Coco: This first album was written by both of us, and it was more about telling stories, even though some of them are partly biographical. It was a conscious decision to collaborate on the lyrics, since this was the first attempt at songwriting for me and I wasn’t ready at that point to cry my heart out. It is very important that the lyrics are heartfelt, and isn’t about emotions just for the sake of it.

L+T: The debut album has been received extremely well out here, was there any concern with how American audiences would take to your debut.
Robin: Our only intention was to make the best music we could. We never put much thought into how different parts of the world were going to perceive it. We were in such a fortunate position since we already had interest and attention in the states before we released the record over here. We are deeply grateful that we are now finally inside the bubble, and not just looking in from the outside.

L+T: What fans have you made that surprised you?
Coco: Every single person that has shown a love for our music has surprised us.
Robin: We are very grateful that artists such as Raphael Saadiq, Leon Ware, Prince, Odd Future and Adele have been generous with their compliments to our music and in the process we even got to work with some of them.

L+T: A Boom Clap Bachelors album was also released recently. Was that something that was done in between Quadron or revisited after the debut album was completed?
Robin: Both. The main skeleton of the songs were done prior to the making of the Quadron album, but they were revisited later on because we felt it was a shame for the songs not to see the light of day.

What does the future hold for Quadron? Can we expect a follow up album soon?
Coco: Let’s just say that this young girl needs to grow older.