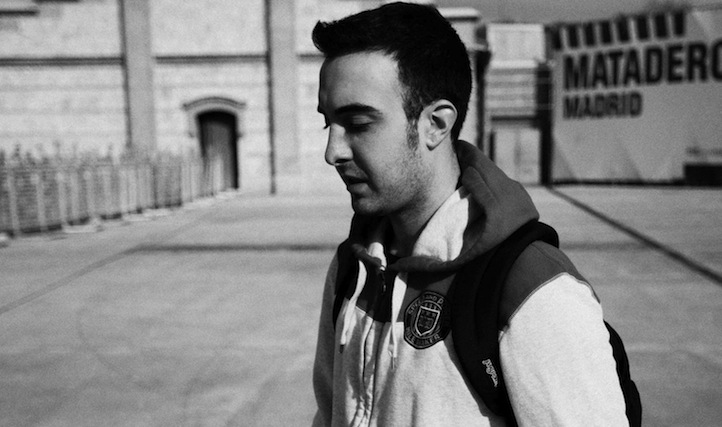 If the past year in Clams Casino’s life never happened, he’d probably be your physical therapist. The abstract beatsmith just finished a PT degree last May when his music career grew wings. While a few fateful messages on MySpace to Lil B The Based God started his buzz, the real movement happened once Clammy Clams aligned with A$AP Mob. As one of A$AP Rocky’s mainstay producers (alongside A$AP Ty Beats and Spaceghostpurpp) Clams crafts slightly off-kilter beats, utilizing electro-skewed samples that push standard rap tracks into a psychotropic realm. His instrumental mixtape fanned the flames of his production career, proving his ability as a composer of standalone pieces sans lyrics. A Dipset fan and proud New Jersey resident, Clams breaks down his career for Life+Times and hints at some big projects happening soon. Oh yeah, and he explains the origin of his name too.

Life+Times: Where did you come up with the name Clams Casino?
Clams Casino: I didn’t come up with it actually at all. My friends came up with it, and like, it doesn’t really mean anything. We were just joking around thinking up things like that and I just kept it because it sounded catchy and stuff.

L+T: Are you a fan of actual Clams Casino?
CC: Well yeah, I think I only had it like once. Last summer I just got it for the first time that I remember, but yeah I like it.

L+T: How did coming up in Jersey affect your style of production and making music?
CC: I mostly listened to hip-hop and most of the people I listened to are people from the East Coast, mostly New York rappers and some Philly guys; stuff like that. But I guess the stuff that I do kind of sounds like that and more like what I grew up listening to so, that’s probably it. You could probably hear a lot of my stuff is influenced by a lot of East Coast producers and New York producers and hip-hop artists so, I’m sure it has a lot to do with that sound.

L+T: How did you link up with A$AP Mob?
CC: I found one or two songs of Rocky’s online that he had posted up. It was actually on one of his friend’s websites. I didn’t know they were boys at the time, but I used to check this website all the time and it was one of his close friends. So he posted up one of his songs and I thought it was pretty cool, and then I looked into more of his stuff. I found he had one video up and like two or three other songs. This is in like May of last year I think – April or May of last year. So I emailed his boy, though I didn’t know they were close, and I was like, “Hey I’m trying to get some beats to A$AP Rocky. I saw him on your site. Do you know how to get some beats to him?” And he’s like, “Yeah! Yeah!” and he gave me his email and he was like, “That’s crazy. We were just talking about your instrumental tape last night.” I was like oh! So I hit him up, I sent him like four beats. I just told him who I was and stuff like, “I produced for whoever. I saw your shit online I want to send you some stuff.” So he hit me right back and was like, “You know you’re like my favorite producer right now! I already have shit recorded on your beats, like stuff from the instrumental tape!” He was already recording over my stuff before we ever even spoke. So when I hit him up and sent him some beats, he already had shit recorded on my beats from the instrumental tape and sent it right back so I thought that was pretty cool. That song from his mixtape, Demons, was the first one, he had that done before we ever even spoke. Then I just kept sending him a bunch of stuff and we just kept going back and forth from there.

L+T: Wow! That’s crazy!
CC: Yeah it’s pretty cool that like, the chemistry is kind of there even before we ever started talking, so I feel it’s just a perfect match.

L+T: Right. How about Lil B?
CC: Lil B, I was always a fan of his before I hit him up and a huge fan of his group The Pack; I used to listen to them all the time. So I hit him up a few years ago on MySpace when I was using MySpace to try to get my beats out so I’d work with artists. I would send rappers messages and stuff. I would send like 20 messages a day to whomever I liked just try to get emails to send beats to. He was with The Pack at the time. And Lil B, I sent him a message and asked him who to send beats to and he hit me back like two weeks later; it took a real long time. I think like a couple weeks or so. He gave me an email, and I just started sending stuff to there and he’d do like some freestyles and stuff on them. I think this was like September ’08. So he just started doing some freestyles on them and stuff so I just started sending him more and more and just keep hitting his email with stuff. So that’s how I started working with him.

L+T: When you’re working with an artist now, it’s much different than you just sending them beats like you were earlier. Do you go ahead and try to tailor the beat now to the artist or do you want to just kind of mold your own flavor into the beat and go from there?
CC: It’s different for everybody; I mean, depending on who. Sometimes I just make stuff just to make it and I don’t really have anybody in mind. I’ll just make stuff and I won’t even think about where they’re going to do this or that or the chorus. You know, I’ll just make a track like three or four minutes or something and just kind of lay it out like where I just think it sounds cool. So a lot of stuff with Rocky, there’s not real spaces for like a chorus…if you listen, it’s not real laid out like ok this is where the chorus goes, it’s kind of just all over the place. I think you could probably hear that best with a lot of stuff I did with Rocky. I just have the beats and do whatever and he’ll find a spot and do whatever he wants to it so that happens a lot. Sometimes I do that if they want if they want it like that but I kind of like having to do different things and not like such defined spots for like alright the verse goes here, chorus goes here. So I don’t really do that too much. I probably just do whatever and then whatever they hear, they can do it like that.

L+T: Your songs, your beats…they can exist as standalone tracks. When you went into production, were you making songs that could stand with or without vocals? Obviously from your mixtape too it feels like you could make it a whole instrumental experience without lyrics.
CC: Nah, I never thought about that until I put that instrumental mixtape out and everybody started saying that. Those are just beats I had for people to rap on. I never thought about them as instrumentals really at all. Because everyone kept asking me for certain instrumentals, like hitting me up on Twitter and stuff. I keep hearing the same names like, “Yo, when you going to put out this instrumental and stuff?” So, I never thought of that. I never was like, “Oh I’m going to put out a tape of instrumental beats and it’s going to be just as cool.” I just kind of put that together as a collection for everybody that kept asking me. Then when people kept saying that they liked it better without rappers and stuff, that was like a complete surprise for me because I never thought about it like that. I mean it’s cool I like it; I think it’s cool that they can do that. You can just listen to them without any vocals on it. But I never thought about that at all when I was making them at first.

L+T: That’s crazy. So from last year to now, how has your life changed? Your crew has gotten crazy amounts of exposure and so have you.
CC: I guess we got a lot more money [laughs]. That’s about it. My life changed…I was going to school; I was planning on working in physical therapy. I finished school last year. I finished in May which is kind of when everything started taking off. So I graduated last year in May and I was planning on getting a job right from there and then that didn’t end up happening. So that’s probably how it changed mostly. I got my license and everything to work, but I’m not really planning on doing that now.

L+T: Wow, you could be in a doctor’s office right now.
CC: Yeah, yeah that’s definitely the biggest change, because that was my whole plan for the past three years you know? I was going to school for the past couple of years and like all of a sudden it just changed pretty fast. Not like overnight, but pretty fast.