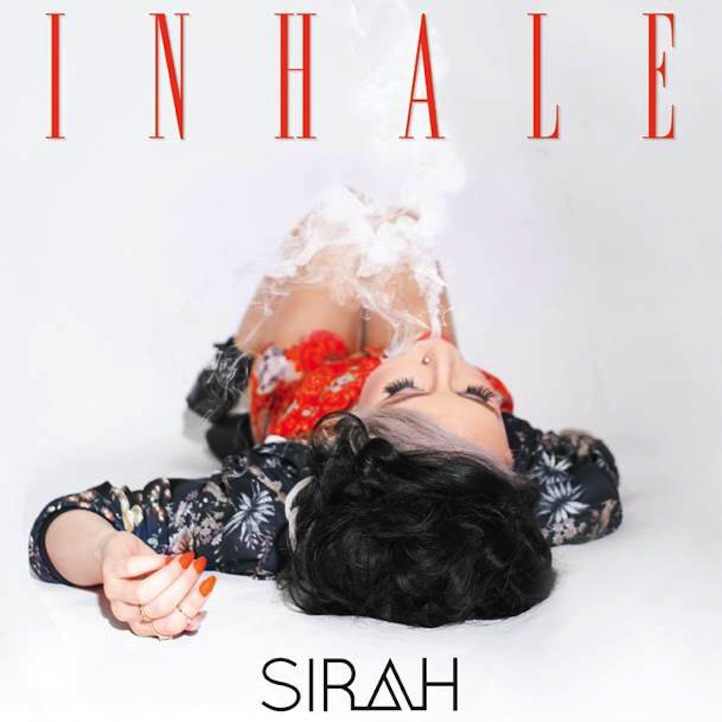 Petite rhyme dropping dame, Sirah, is back with a very intimate and in-your-face EP, Inhale (out today). The candor in which Sirah speaks is relatable to the listener and appealing to the heart. Ultimately, Inhale is the sound of life’s ups and downs in the form of Sirah’s signature gritty rhymes and seraphic vocals. Beginning this week, she will be co-headlining a nationwide tour with K. Flay and Icona Pop. Here, Sirah gives Life+Times an exclusive track-by-track analysis of Inhale.

Life+Times: I had a chance to listen to Inhale – six tracks and it feels like a diary. It’s very candid. What I appreciate most about this EP is that it shows reflection and progression in character. I want your perspective of each track. Let’s start with the title track, “Inhale.” It sounds like you’re in love.
Sirah: I was in love. It’s funny, I recorded that song probably like two years ago and it’s the reason that I got signed to Atlantic [Records]. At the time, I was in a relationship and we were kind of in a hard time. When you think back to that first moment of meeting someone and being swept off your feet – that’s really what I wanted to capture with it.

L+T: I got that vibe when I listened to it. “On To The Next” speaks for itself through the title. It’s definitely is a song about moving on, right?
Sirah: I don’t feel like it’s to anyone in particular. I think it speaks to the fact that my life is really insane. So, there’s a part in there where it says basically “what you fell in love with, is the same reason that you hate me.” I think that’s true. Sometimes with dating, people are in love with the idea of what I do and possibly who I am – but at the end of the day I work 15 hours a day and I jump in a tour bus with a bunch of guys on the road. That song was talking about finally making time for someone and then them choosing other people over me.

L+T: I’ve been there and a lot of people have gone through the same thing. It’s a very relatable track.
Sirah: Completely! I think everyone’s been in some sort of tumultuous relationship in one way or another – even if it’s just with yourself. I feel like at the end of that song, the part where I say, “I thought you loved me/I thought you loved me” – that was actually a freestyle. You can kind of hear it in my voice where it sounds like it’s sort of breaking because that’s how I felt.

L+T: That tone is conveyed throughout the track. Anyone that’s dated before and been through a “tumultuous” relationship as you said, you know how that emotion feels. “Stick Up” and “You Know You Want It” have insane beats! Who produced those? Was it you or a buddy from OWSLA? Based off of our last conversation at SXSW, I know you are close to a lot of the producers on that label.
Sirah: Oh my god! You heard everything! “Stick Up” was produced by one of my friends who actually has released some projects on OWSLA. It was later co-produced with a producer I’ve been working with, Tommy Tysper. He’s from Sweden and he’s awesome. We worked on it and worked on some more stuff. I was super hands on. It was definitely a collaborative effort. On “You Know You Want It,” that was my producer Mighty Mike who also produced “Inhale” and “On To The Next.”

L+T: I initially was going in order of the track listing and skipped over a track – “Icarus.” The Icarus I’m thinking of is associated with Greek mythology. That may not have any ties to this song, but it could also have symbolic meaning.
Sirah: “Icarus” is possibly one of my favorite songs on the EP just because it really differs from what I’ve done before and the approach is different. Icarus in Greek mythology, basically he wanted to fly close to the sun. It’s really a story about narcissism and ego and grandiosity. He wanted to fly close to the sun and he did and he ended up falling into the ocean and dying as a result. The song was really emotional. You can hear it in the second verse, you can hear me almost crying in my adlib because it was really emotional. It was sort of a mixture of all the people that I’ve known that have passed away as a result of overdoses or people who are still alive but have completely lost who they are. That song is pretty close to me. My best friend just passed away about a month and a half ago. It was his favorite song. I dedicated this song to him as well.

L+T: I’m so sorry to hear that.
Sirah: He’s been one of my best friends for probably five years. He actually has such a huge part in this whole EP, so it’s been really bittersweet. I feel like in terms of “First Impressions,” I directed and we all wrote the teaser together for a video that will be coming out for it. We spent 32 hours straight working on it and we took, like, a day break. Then, “Icarus” was his favorite song. I found out the day I finished “Stick Up” was the day I got the call that he died – I was in the studio. This EP holds so much of who he was. It’s really important to me beyond just the music.

L+T: Wow! That’s really heavy. The fact that you’re turning this tragedy into something positive says a lot about you. There’s solace in artwork. It doesn’t take the pain away, but it does help.
Sirah: I think it’s been really ironic, he was possibly one of my biggest supporters through the whole thing. He actually texted me before the whole Grammy thing and he said, “I just want to mention that you were basically homeless…and now you’re nominated for a Grammy. So, just throwing it out there. I don’t know how you feel about that.” I feel like he was such a huge part of why I’m still doing what I’m doing. It’s like eventually everyone will transcend on and I feel like music is a way – whether you make music or a part of it – it’s a way to live on.

L+T: This will help others who listen to this record – your explanation. You briefly mentioned the last track, “First Impressions” earlier. I, of course, have my own interpretation of this song. I could be completely wrong, but I hit it right on the head with “Icarus.” “First Impressions” is a track that speaks to personal growth.
Sirah: I think it’s kind of the same vibe all over. For “First Impressions” – I think it was two days after the Grammy’s and I went on the Internet and listened to [the] Soundcloud of random kids’ for, like, 18 hours a day like a weirdo. I wrote to these kids and they were like, “Didn’t you just win a GRAMMY? Why are you writing to me on Soundcloud?” That’s how I got the “First Impressions” beat. I recorded it in my bedroom. We ended up shooting a music video for it. It’s, like, a big collaborative piece. This song speaks to the sort of thing I was talking to you about for “On To The Next.” I feel like with a lot of my relationships over the past year, like romantic or otherwise, a lot of things changed. When I wrote “First Impressions,” everything’s been very bittersweet. It spoke to that and not just to love and the lack of actually being able to have that be real in my life. So, it’s about all of my relationships changing.

L+T: Overall, this EP is very different than your past releases. You really went all in emotionally and the result is evident. As I said at the outset, it’s a diary.
Sirah: Oh, completely! On “You Know You Want It,” some of the things I talk about on there is all true. It was kind of like, ‘Whoa! Am I really gonna put that out?’ I’m like, ‘Yep!’ There’s, like, really dark things that I talk about. Life’s too short – why lie about who you are and what’s happened? It’s out there.

L+T: If you’re not honest with the listeners, you won’t be happy with it. Let’s talk about the tour you’re about to go on. It is super “girl power” – Icona Pop, K. Flay, and you! You all are so edgy. How do you feel about the tour? Do you have mixed feelings?
Sirah: I’m so excited. By the way, I don’t feel like I’m on some outright girl power stuff just because I rarely see girls. However, I think it’s so dope and I think K. Flay is incredible. She makes her own beats on stage. She’s awesome! I love her new music. Icona Pop – I watched them in Texas and was like, ‘I love you guys!’ I’m so excited and it’s their first major tour. K. Flay just dropped a new awesome record. I’m dropping my record. It feels really good. It feels really right. Our fans will be able to translate because it’s just really powerful women.