The Icelandic indie alt band Sigur Rós comprised of Jón Þór Birgisson, Georg Hólm, and Orri Páll Dýrason, still possess that initial spark that attracted fans globally years ago. The trio’s seventh studio album, Kveikur, makes a robust statement through a darker sound and the inclusion of electronic instrumentation distinct to their past projects. Jón’s falsetto remains untainted, Georg and Orri’s bass and drums are much more potent, and despite the exit of Kjartan Sveinsson’s keyboarding skills – the piano notes are more intoxicating than ever.

L+T: She was known for her abstract and subjective artwork. How did you three come across this photo?
GH: I guess it’s a long story, but…there’s a person that we work with most of the time when we start coming up with ideas. Her name is Sarah. We had certain ideas of what we wanted. We wanted…something human, but it had to be striking. We couldn’t put our finger on what exactly that was supposed to be. We had those ideas. She got us a mood book and, I guess, it was just one of the images there. As soon as we saw it, we all kind of pointed at that photo. In the end, we ended up using that, except obviously, we manipulated it a little bit – but not too much.

L+T: Correlating with some of Clark’s artwork, I compared her work with your album. She later used her art for psychological treatment. You guys described the album as much more aggressive and I definitely agree. It’s a lot more intense than the past albums. Would you say that putting together this album was therapeutic?
GH: Yes, I would definitely say so. From beginning to end, the whole process of this album was really, really sort of pleasant. Some of our previous records were really difficult to make. You kind of had to drag yourself to work on something, like, “Oh this is really good. I like it, but I’m finding it difficult to work on it.” This time it was pleasant. Obviously on this record it’s three of us instead of four of us. We didn’t know what to expect or what would come out of it. That was also another pleasant thing that happened. As soon as we started working on it, everything came really quickly. It was not a lot of adjusting. It just happened naturally. 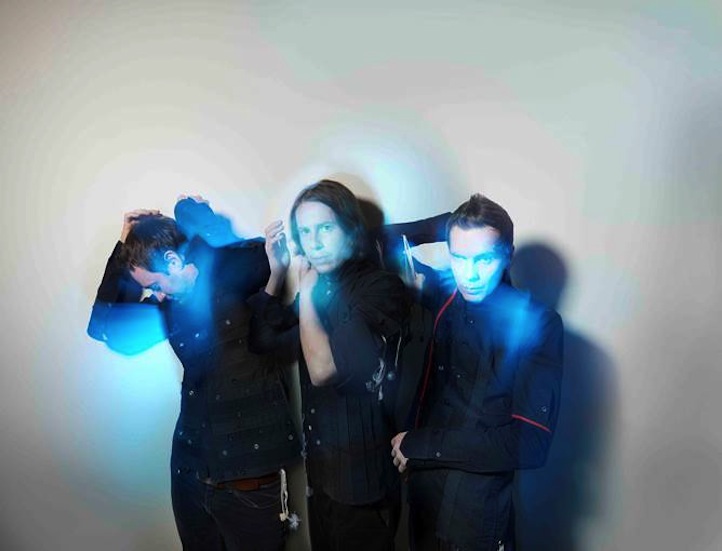 L+T: Seven albums in, this is the first time you guys have actually have actually produced and will be performing as a trio. The past albums included a piano. On this latest album, was it challenging in the beginning with the absence of Kjartan (former keyboardist)?
GH: Yeah, it was. We didn’t notice it in the beginning, but that’s when we kind of realized that when we were making music there was always one element missing. At least, it kind of sounded like it was missing. It was obvious that it was Kjartan. We did start working a lot with the computer and loops. We kind of started calling the computer that we were running our loops – we called it “Kjartan.” (Laughs) We got that missing element back again.

L+T: I was wondering about that. I know the last song, “Var,” that’s strictly piano. That’s a computer loop?
GH: No, that’s a piano part that we played. We all play piano as well.

L+T: I thought so. I think it’s admirable that the album is entirely self-produced considering you just signed to a new label. Would you say that XL Recordings was fairly open to your band’s creative vision for the album?
GH: Well, yes. For us, it’s always been like that. As soon as we start working with a label, we come with a disclaimer – you don’t mess with what we do. This is our thing. We kind of just worked together on getting it out there. We would never be able to work with people that told us what to do. That’s not how we work. We create our music. In many ways we’ve always co-produced our records. It was just about time that we did it completely on our own and it wasn’t hard at all. It was like we’ve always been doing it. We didn’t even realize that the record was produced by us until we started writing the notes that say “produced by.” We kind of all looked at each other and were like, “Oh, yeah!”

L+T: That’s great! Now, I don’t have all of the lyrics in English, but I want to get your synopsis of the album. The English translations of a few of the song titles are “Storm,” “Iceberg,” and “Candlewick.” What is the overall theme?
GH: I’m not sure. It’s kind of a weird mix. The lyrics are something that comes last for us. I wouldn’t say they’re not important, but they are not as important as the music. They have to be good though. They come second to the music. The song dictates what the lyrics are going to be. We usually sit down and brainstorm. We write down words or thoughts – if we feel like we hear words in the song. So, usually on the record there’s not really a red line going through the lyrics. It’s not one story. It’s different stories. I guess this might sound a little bit corny, but there’s a lot of nature in this record. Just like you said, there’s “Iceberg” and there’s a lot of lyrics about weather – battling through a storm or something like that. There’s even one song which is kind of about table manners. (Laughs) It’s kind of mixed and weird.

L+T: You can use that in your next interview with someone.
GH: I probably will. (Laughs)

L+T: What would you say you’ve learned from creating this album – personally or musically?
GH: That’s actually a really good question. It’s probably always best to just say the first thing that comes to your mind and again, this may sound really corny, but I think we all renewed our friendship in a way. We realized how good of friends we are.