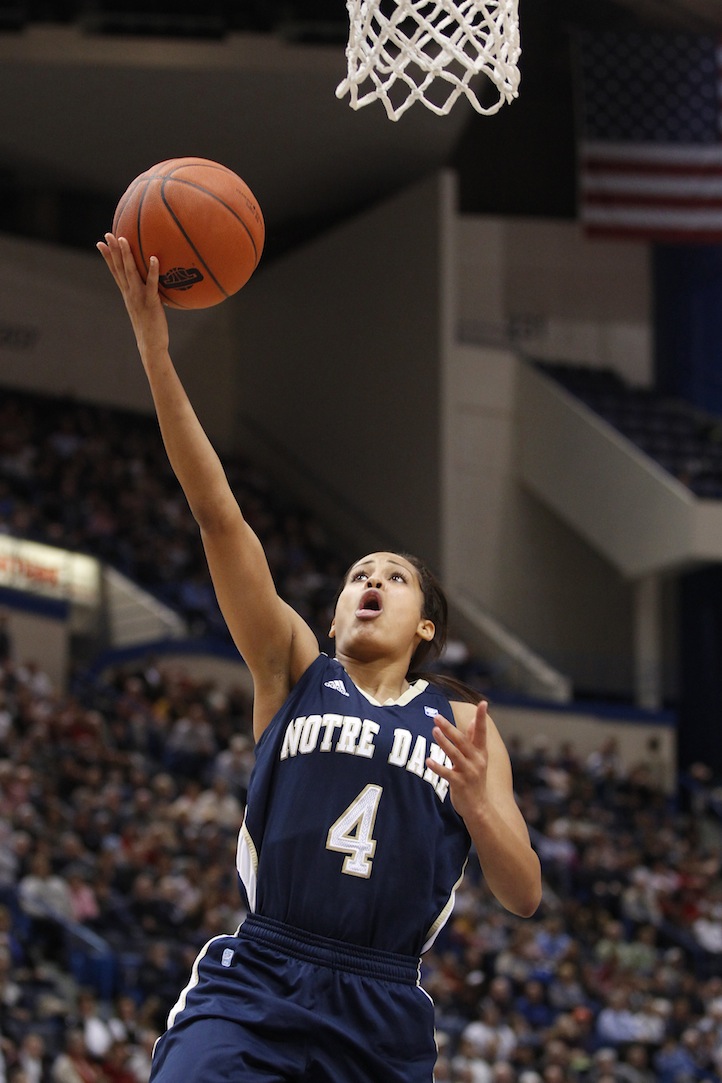 Arguably the biggest star to emerge from last year’s NCAA Tournament was Notre Dame point guard Skylar Diggins. It was there that the South Bend, Indiana native led her team to the National Championship, only to fall six points short. Despite the loss, her combination of talent, beauty and charisma made her an immediate hit, indicated most clearly by her Twitter following, which jumped from 5,000 before the tournament, to 65,000 after the national title game. It’s now a number that has since doubled.

The increased notoriety, has seemingly had very little, if any, effect on the humbled and focused point guard. This year, the Irish closed the regular season at 30-3 and Diggins is a major reason why, averaging career-best numbers across the board, including 17 points, 5.7 assists and 2.6 steals per game. Notre Dame was named a No. 1 seed in the Women’s NCAA Tournament and will begin their title run this Sunday against Liberty.

After a game in which she finished with 11 points and 10 assists, notching her third double-double of the season en route to a 90-70 victory over DePaul for the Irish, Life+Times had a chance to quickly catch up with the pre-season All-American.

Life+Times: With the success you all had last year, how has it been to deal with — and meet — the high expectations this year, especially given the jolt in popularity?
SD: Last year, I think, was great incentive for this year [as far as] making it far but not winning it. So we’re just trying to come in this year and play every game like it’s the championship and have that mindset in practice to get better every day and get ready for the end of the season, but at the same time, still take it one day at a time.

L+T: You’re the team’s leading scorer, but then there’s games like today, when you seem to be looking to distribute more. Talk about the progressions you’re going through on the court, determining when to shoot, drive, dish, etc.
SD: Just reading the defense; being opportunistic. Trying to make those decisions, passing to the open man, trying to draw two [defenders], just trying to do my job as a point guard to have an even attack, as well as distribute the ball when it’s there. I think as the year goes by, more teams are starting to pay more attention to me, so that’s opportunities for my teammates; and then my teammates do a good job playing off me and moving without the ball.

L+T: How is to play right here at home? You definitely get a lot of love here [in South Bend].
SD: I think it’s great here, being able to see my family come to every game and be a part of this college experience. Every time it’s a home game, I feel like I know half the people in the crowd, so that’s great. The fans are amazing, they’ve been amazing for years, and they come out every game whether we play a top-ranked team or not. They’ve been like that since I’ve been here and many years before. They’re the key to some of our runs, they’re gonna be loud, they give teams tough times and this is one of the hardest places to play because of the fans.

L+T: Talk about the state of the women’s game and your place in it as one of its premiere figures.
SD: I think the women’s is growing. We’re starting to catch up with the guys. We’re getting more athletic, it’s a quicker game, the new rule changes – the charge arc and things like that – are making it a faster game. I think that’s good for us and we have that ability to play as quickly as the guys do. You see women making more athletic moves, higher scoring games, and I think we’re exciting to watch. The only thing we don’t do is dunk, but you know you still see spectacular passes and basketball, high-scoring games that I think people love to watch. Me, I’m just trying to do my part on this team. I really don’t care about what other people see. I’m just trying to be myself, stay myself, lead this team and do what I have to do to make sure it’s all about the team.

L+T: Who were some players you grew up watching, men or women.
SD: Growing up, I watched a lot of [current assistant and former Notre Dame All-American and 2001 National Champion] Niele [Ivey], since I was here [in South Bend]. It’s great having her on the bench, too. She’s been my mentor. Guys, I watch Steve Nash, Chris Paul, Derrick Rose. I also watch a lot of Lindsey Harding, Candace Wiggins, Lisa Leslie, and Ticha Penichiro are some of my mentors that I look up to now.

L+T: You mentioned it a bit there, but talk about playing for a legendary coach in Muffet McGraw, and having the guidance of a former player like Niele Ivey. How have they helped you grow as a player?
SD: I’ve been around a long time so I had an opportunity to have a lot of talks with Coach McGraw before I came here. She’s a Hall of Fame coach, one of the best coaches in the country –  the best coach in the country, in my opinion – and her basketball IQ is so high. We could be watching a guys game and I’ll text her, and she’ll have things to say to help me learn. She’s still a student of the game, she’s so eager to get better and we take that attitude. With Niele, she’s just a competitor, so she’s looking to get better. She’s been to where I’m trying to go, so as many times as I can pick their brains, I try.