The Miami Heat are headed to the NBA finals, and any sports fans not residing within a whiff of Jerry’s Deli pastrami are livid. Aren’t LeBron James and Chris Bosh supposed to be punished for jetting from mid-market teams to South Beach? Doesn’t Pat Riley, whose Hyman Roth-like tactics brought them there, already have enough rings? People hate it when a plan comes together.

But as much as we like sports to fit the narrative of a morality play, how can you say the Miami Heat did not earn their way to these finals? In consecutive series, in just ten games, the Heat took down the East’s dominant superpower in the Boston Celtics, as well as the team with the MVP in Derrick Rose’s Bulls. They did so in stunning fashion, as well. Chris Bosh found redemption. Bench players like Mike Miller, Udonis Haslem, James Jones, and Mario Chalmers made huge contributions. And James and Dwyane Wade elevated their games to otherworldly levels in the fourth quarter, most fittingly last night when they gave the Bulls a tracheotomy amidst a 18-3 run to end the Eastern Conference finals. As the smoke clears, all we can do is look around, nod our heads, and admit that talent reigns supreme, and the Heat simply have more of it. 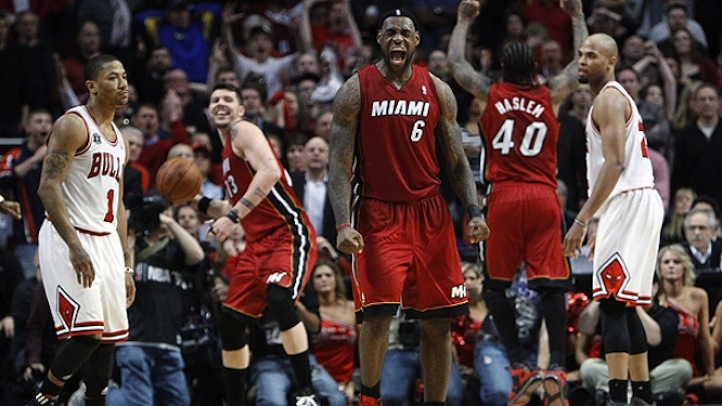 In recent years, we have had to question whether we are truly living in a meritocracy—a society that truly rewards skill and talent. Billboard chart positioning and box office gross certainly don’t reflect the quality of art. The most qualified politicians do not always prevail. Even in other sports, a Tim Lincecum can get hot in the baseball postseason, or a Cam Ward can light up the Stanley Cup finals. The NFL lives by the motto of “any given Sunday,” an adage notably proven when the New York Giants beat the then-undefeated New England Patriots in Superbowl XLII. But in the NBA, talent generally prevails. The Heat have reached the finals simply because they have the most great players. And oh yeah, out West, the same can be said of the Dallas Mavericks who sport an array of stars and demi-stars led by the so-focused Dirk Nowitzki.

So let’s all take a deep breath, kick back, and look forward to an outstanding NBA finals.