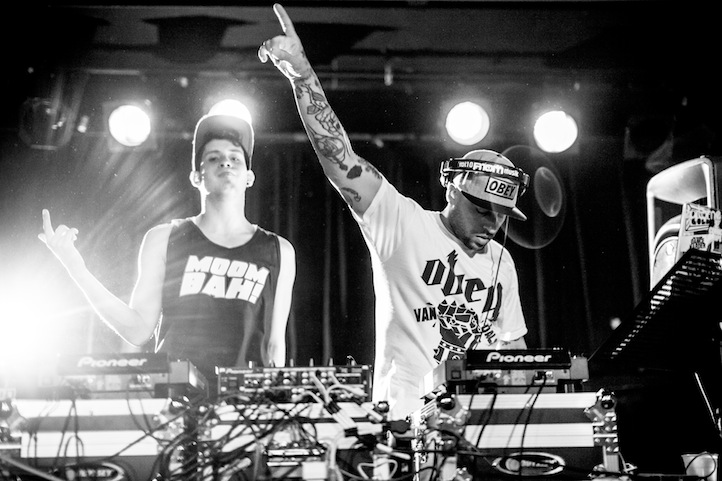 With any movement comes patience, coupled with patience is motivation; when the two qualities work in junction with each other it’s only a matter of time before everyone catches on to the idea proposed. Sazon Booya is the product of such an equation. Joshua “Mr. Vega” Vega and Stephen Alex “DJ SAV” Vasquez are the NYC based moombahton DJ duo that form Sazon Booya. With the explosion in interest of electronic dance music, it is no wonder that insatiable hungers for newer forms are being requested. The arrival of moombahton could not have hit the music scene at a more opportune time than now. Although stating that they do not desire to step outside of moombahton, both Vega and SAV express that they  “draw influence from other genres, particularly hip-hop and dancehall.” Here, the trendsetting duo debut news of an album, talk life before their DJ days and gives us a synopsis of moombahton’s progression and future.

Life + Times: Moombahton has been described as a sound that has 108 to 115 beats per minute (BPM) with a fusion of reggaeton with house. For a John Doe that doesn’t understand the electronic dance music (EDM) lingo, how would you both define moombahton?
Mr. Vega: I usually just say it’s reggaeton and dancehall elements mixed with dance music and house music elements. When you get that fusion, you get moombahton. That’s the simplest way to describe it.

L+T: SAV, I had no idea you put together the film, The Electro Wars and was the counterpart of this project. Were you affiliated with deejaying before that film? How did you get your start in deejaying?
DJ SAV: I was deejaying for about five years prior to The Electro Wars, but nothing on this scale. I was just deejaying small house parties. A friend of mine, his name is DJ Wildlife, he deejayed in Queens. I lived in Queens, he would bring me out to the clubs and he taught me how to DJ on the Technic 12’s (turntables) on vinyl.

L+T: What about you, Vega?
MV: I didn’t start deejaying until I started producing dance music. I came from the hip-hop world, so I used to produce stuff. I worked with Violator (management), G-Unit and Bad Boy. I used to do that stuff. In 2008 I found dance music like Justice and Boys Noize and that really got my mind to change as far as what I wanted to produce. I think in 2010 was the first time I ever deejayed live. It was only out of necessity because it was the only way to get gigs to play my stuff. I had never done it prior to that. My father’s a house DJ from when I was a little kid. I never even picked it up from him. I fell in love with the music, but definitely not the whole technical deejaying side.

L+T: Vega just mentioned Justice and Boys Noize. Could you give a name of a DJ that’s been influential in your sound or technique?
DS: We draw inspiration from a lot of those guys in different ways, even in the smallest ways. It just depends on the mood. Justice is a big influence and Daft Punk because a lot of their stuff is sample based. When we first started out, a lot of our stuff was sample based. It was very heavy on samples. We have kind of drifted away from that now. Yeah, definitely Justice and Daft Punk. They are probably two of the most successful EDM acts of all time.
MV: Especially being duos also. We definitely model ourselves after stuff like that. They made such a big impact on the scene for what they were doing, so we try and do the same thing with what we are doing to make the same kind of impact and influence over the scene and try to set the bar for people.

L+T: Speaking of duos, I am always curious as to how artists, specifically DJs, of two or more function in regards to the start to finish of putting together a track. So, I pose the question to you both, how does your process work?
MV: It varies a lot of the time. Sometimes we’re in the same room doing it or theirs times where I’ll start something at my house and send it over to him for his opinion. Then, he’ll send it back and say, “well, maybe you should try this” and sends it back. He’ll find old school or Latin samples and be like, “yo, try this! This part sounds good, we should sample this.” We go from there. It depends on what we’re trying to do. The IMPACTO! EP was something that we put out to give back to the fans.
DS: It went through variations.
MV: That record really started as a collaboration with Heartbreak. We were going to give to him and then we held back. “She’s The Bass Drum” was made last December with Etc!Etc! We were on tour for the Moonlight Tour and I started it there in L.A. That we held onto for almost a year. “Impacto” and “Shake” with Valerie Valentine were made around the same time and literally within three or four weeks we had both of those tracks done with those artists. Everything varies. We don’t have one set thing we do. We are constantly going back and forth on tracks with ideas.

L+T: You guys have a whole J Dilla situation where you have songs catalogued out for years.
DS: Hey! The best is yet to come.
MV: We still have a whole other project that nobody’s ever heard. We’re just making sure it comes out the right way.
DS: I think we should just say what it is at this point.
MV: Well, we have an album that we have been sitting on since about May. It’s been done. We’re just trying to find the right home for it with people that will push it the right way. That’s why we held back. Our last official release was in March. Then we released IMPACTO! two weeks ago or so. That was just to hold people over because we’re trying to make sure this comes out the right way. It will be the first moombahton album.
DS: We found a home, a very good home.

L+T:  With dubstep you see a lot of it being mixed with house, electro and just about everything else. Would you consider the sound you work with, moombahton, as a genre that has versatility in being mixed with other subgenres of EDM?
MV: Moombahton is like the middle. It definitely bridges the gap between drum and bass, moombahton, house and dubstep. If you follow tempos, it goes in that order. It definitely bridges the gap and brings all those things together. Dillon Francis said it best, “[Moombahton] was what was missing in all the genres.” We love the fact that we’ve played shows with acts like Caspa who is big dubstep. We played a show with him and the crowd loved it. It fits with everything. It totally fits in the middle.

L+T: We can’t talk about dubstep without mentioning your ties to Skrillex. Before he even released Nice Sprites and Scary Monsters, you were working with him, right?
MS: Yeah, we had actually met him before any of that. He had just signed with AM Only. Nice Sprites didn’t even have a release date. He had just signed it to Deadmau5, but there was no date. “Bangarang” was actually a different track and he was showing us the preview of that track. “Bangarang” was actually “Rock n’ Roll,” but he called it “Bangarang” first. So, it was so far before any of that stuff happened. SAV was interviewing him for The Electro Wars. So, that’s how we met him.

L+T: Well, how did you both meet?
DS: Through The Electro Wars also.
MS: He was supposed to interview me because at the time I was doing the EDM stuff. That’s how we came together and from there we bridged a partnership.
DS: I wanted to do something that was Latin influenced because there really hasn’t been a movement since Latin house that uses electronic elements. So, I was like, “man, we should really do something to really bring that back.” At that point, none of us had listened to moombahton. I listened to it at Electric Zoo that year in 2010. Diplo dropped a track and forget about it!
MV: We jumped into it after hearing it. We said, ‘let’s try this and see what happens.’ It worked out.

L+T: Anyone in particular you guys would want to collaborate with that’s non-EDM? Give me your top three and you can’t think about it.
DS: I was just saying on the way over here, Kanye. That dude is an inspiration for me.
MV: I would like to work with Mike Posner and Big Sean.

L+T: Trance and techno have proved their longevity factor. What’s the future for moombahton?
MV: I do not see it ending. It’s a key piece to dance music. It’s not going away. We’re never going to stop pushing it. I feel like in a year we have made some major strides in taking it to almost a national level. Commercial people are now hitting us up for stuff. It’s only gonna get bigger and better.
DS: I feel like the versatility of the genre is gonna allow it to continue to grow. Even though trap has been around for years, it’s now trending in EDM. There are ways to continue to evolve in moombahton. There are other genres that can’t do that or have that versatility.

L+T: A busy roundup for the year?
MV: We’re trying to close the year right.
DS: I feel like the beginning of next year will be the new chapter for us for sure. We’re going to revamp a lot of things and take things to the next level. We will 2.0 everything.