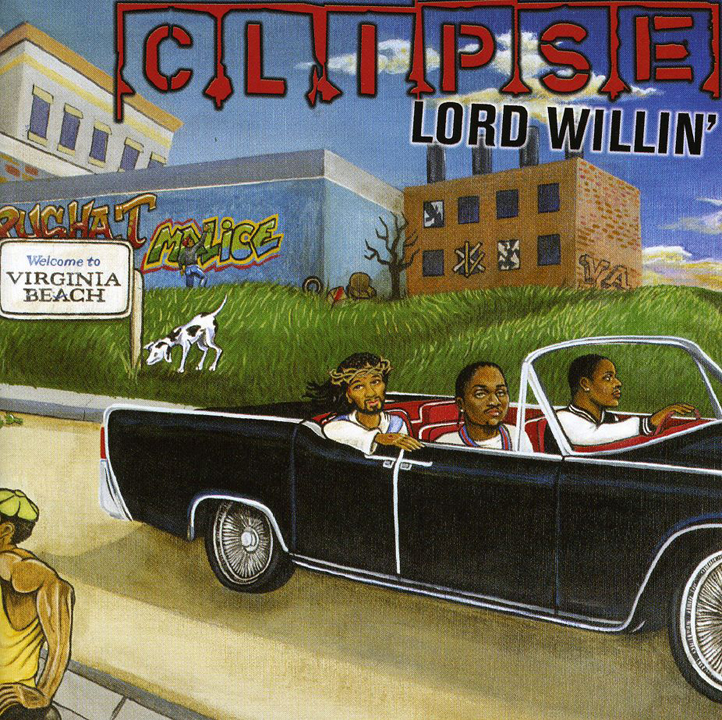 This month marks the tenth anniversary of the release of Lord Willin’, the 2002 major label debut from Virginia Beach rap duo Clipse, comprised of brothers Gene “No Malice” Thornton and Terrence “Pusha T” Thornton. Produced entirely by hometown neighbors The Neptunes, the album—specifically singles “Grindin’” and “When The Last Time”—validated the duo’s brand of cocksure, cold-blooded lyricism following the shelving of their first album, 1998’s Exclusive Audio Footage.

As the 2000s came and went, the rap landscape changed dramatically. Yet, Clipse refused to compromise their styles in the face of label pressures, culminating in the 2006 classic follow-up, Hell Hath No Fury, as well as the prolific We Got It 4 Cheap mixtape series, which helped to transform the way artists approached online promotion.

Now, a decade later, life has extended beyond the Clipse, as Pusha T is set for a starring turn on the blockbuster G.O.O.D. Music compilation, Cruel Summer. Here, he catches up with Life + Times to discuss then and now, starting at square one: the making of Lord Willin’.

Life+Times: How was the cover conceived?
Pusha T: I wanna say that my brother came up with the cover. We were tryin’ to do something that represented the title really well, but we wanted to have something along the lines of the [“Sugar Shack”] painting in “Good Times.” That’s how we decided to do a drawing. Courtney Walter was our art director at the time—she sought out the painter. 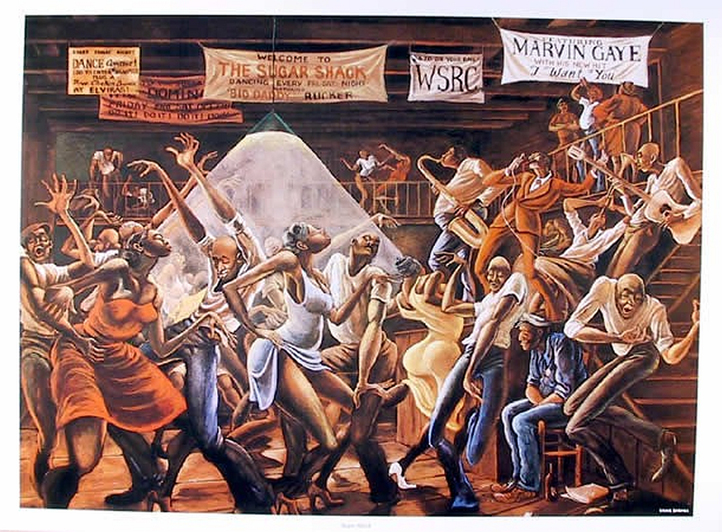 L+T: How did the literal meaning of the title play into your plans for the album?
PT: I know it’s said in Virginia a lot. It’s said by my family. It’s a saying that really means if it’s the lord will, then it’s gonna happen. Everyone says that it in regards to, like, “I’m gonna go to the store today and go shopping, lord willin’.” Or, “I’m going out to eat about 9 o’clock, lord willin’.”

We had already been through having to deal with not being able to put out an album. So, one of the themes was if it was the lord’s will for the album to come out, it was gonna come out.

L+T: Upon its release and especially after the failure of your first album, 1998’s Exclusive Audio Footage, what were your expectations?
PT: Oh man, we were never really expecting much. There was just a lot going on at the time. There was a lot going on in regards to our production team, The Neptunes. But we knew we had innovative music.

L+T: Let’s start with the intro track—it’s still devastating all of these years later. What was the intent there?
PT: Whatever you hear first sets the tone of the album. It was really about establishing identity, and, like, putting our flag in the ground. We basically wanted people to understand and know where we were coming from—no one had ever seen this side of Virginia before. We knew that this music was a bit newer. Even though we had The Neptunes on our side and they were everything at the time, our criteria for The Clipse was outside of what The Neptunes were doing. Our first record out was “Grindin’.” This was at a time when Pharrell was hot, the Neptunes were hot. He was on every hook from Nelly to Mystikal, everybody. And we have a hook where he’s actually not on it. The intro…it basically set the tone for all of those maneuvers and moves. It was just like, “This is what we are, we’re different. This is the streets, this is Virginia, this is new, this is risk-taking.” Playas, we ain’t the same. You know.

L+T: When you first heard “Grindin’,” did you expect it to be a staple of lunchrooms everywhere?
PT: I didn’t, but it was a record that I knew was gonna be way too innovative. I think it was probably the first time I rewrote a record—and a record that me and my brother honestly rewrote a couple of times—just because it was unorthodox, it was new. We were like, “Wait a minute, where does the beat start? Where’s the verse? Where’s the hook at?” It really threw us for a loop.

The way it was presented to me…I was actually home and Pharrell was in the studio and he called me and he was like, “Listen. Get up here right now. Get up here right now—I’ve got this record and if you’re not up here in 15 minutes I’m just giving it to JAY Z. I am. I’m giving it to him. If you’re not here in 15 minutes…I know you’re home. You’re home. You’re home. Your house is 10 minutes from here. That means you’ve got five minutes to get ready and get over here. If not, I’m giving it to Jay.” I couldn’t really deal with that. And I was there, needless to say, in 13 minutes (laughs).

L+T: Now, you guys have always been synonymous with fashion, especially when you look back to the days of Hell Hath No Fury and Bape and Ice Cream. But I think one thing that’s overlooked is the video for “Grindin’” and its impact on the throwback game.
PT: I think [Fabolous] gets the title for “King of Throwbacks.” Throwbacks were such…it was just the thing. Now, we’ve always had, like, super strong ties with Philly. Major Figgas. Philly’s Most Wanted. Ab-Liva is still down with us today. Philly was also the first place to break “Grindin’.” It’s also the home of Mitchell & Ness. So, the throwback movement… we were just there, we were in the mix of it, and we happened to have really close ties to the city where a lot of this stuff was coming from.

L+T: The Virginia Squires throwback and the Kings Tiny Archibald jersey—were those conscious choices at the time?
PT: Oh, hell yeah. Had to be. There was almost a fight over the Squires one. You know, Virginia doesn’t have any teams that are, like, synonymous to VA—no baseball, no basketball. We have all the players, like all of the great players are from here, whether you’re talking football, basketball, whatever. Virginia Squires…we all were tryin’ to claim it.

L+T: You mentioned Fabolous earlier, who was featured on “Comedy Central.” Ab-Liva, Rosco P. Coldchain, & The Lox were other notable guests. These were the days before e-mailing tracks back and forth, right?
PT: Definitely were the days before e-mailing tracks back and forth. But the only person I was even in the studio with was Rosco. If you think back, man, Fab was poppin’ at that point. And The Lox were already who they were. So, I think what was happening was that [Pharrell] was getting in the studio with these guys. He was moving around way more—at this time, what artists weren’t they in the studio with? Once we knew who we wanted to put on those records, it was a call or two away.

L+T: Pharrell then, Kanye now. What’s your process like in relation to each producer?
PT: Well, with Pharrell, a lot of times you walk in on a beat. There’s a beat and a concept. If he’s really, really super duper feeling what’s going on in his creative process, there will be a hook. If not, then you guys are gonna come up with the hook. But when you come there, basically the beat and the track is 100 percent finished. And the concept is probably there.

Now with ‘Ye, you’re sort of there for the process. He’ll give you, like, skeletons of beats and then you latch on, and whatever you latch onto in that beat, he’ll take that part of it and give that to you in a writing sense. After that, I’ll bring back the verses to him. From there, he builds on the beat. Matter of fact, he builds on the beat, he builds on my verses—like, the first few bars of a verse might now be the back half of the song, or he may take out two bars from a verse. He just turns it into a real movie. And the thing about it is, it’s a surprise for me because I’m usually married to the beat and my verse in one way. And by the time it’s done, I have like this whole song with like 9 different sounds that weren’t in it when I was writing to it and it’s just a whole new experience. I get to fall in love with it twice.

L+T: From Re-Up Gang to G.O.O.D. Music, what is it about a group dynamic that appeals to you?
PT: It’s an easier situation. It’s just 100 percent easier. With me going solo, I found out how much I leaned on my brother. I’m talking about in a music sense. I’m talking about the press portion, too. Man, they might have told me that you were gonna call me at one o’clock and, like, since I was just picking up my dog , I wouldn’t have answered (laughs), because then I knew y’all would call my brother and he would answer and he would’ve done the interview. Those type of things don’t happen no more, dog. It’s all on my shoulders.

L+T: Also, in the context of surrounding yourself with all of this talent now, obviously that sharpens your skills, as well.
PT: Hell, yeah. I mean, it’s just great for creativity as a whole, man. And it sort of keeps you abreast of everything that’s going on. I can easily talk to CyHi [Da Prynce] and be like, “Yo, what’s the popping record in Atlanta right now?” And he may tell me something that I don’t know, you know what I’m saying? Or Sean…Sean is a great gauge of what’s hot in a couple different capacities, like what’s hot fashionably. He has his hand on the pulse—I’m talking about the opinion of the young guy who is in the know, who actually knows which Jordans are dropping or so on and so forth.

So creatively, you already know what’s it’s gonna be. You have five different styles. Me personally, with everything I do being based on lyricism, I have to find ways and tricks to make sure that my verse keeps up with the stylings of a 2 Chainz. Or, you know, when ‘Ye comes with the ill pop culture references that are right in front of your face but you just won’t say it—I won’t say it—I have to think of other things that give my verse some color. So that just makes me better. That’s just music. That’s just me creating. There’s a whole bunch of other things I get from it–like I said fashionably what’s hot in the opinion of the youth. And musically, not creating just what’s out there. Like, man, you can get caught up in just your own shit and forget there are other guys out there that are just getting busy and making hot records. And so I need to know what that is, too.

L+T: We’re ten years on from Lord Willin’ and 14 years on from Exclusive Audio Footage. Did you anticipate such a lengthy career?
PT: I never really thought about it, man. It sort of just slapped me in my face the other day when my brother told me this is the 10th anniversary of Lord Willin’. I’m like, “10 years? It’s been that long?”