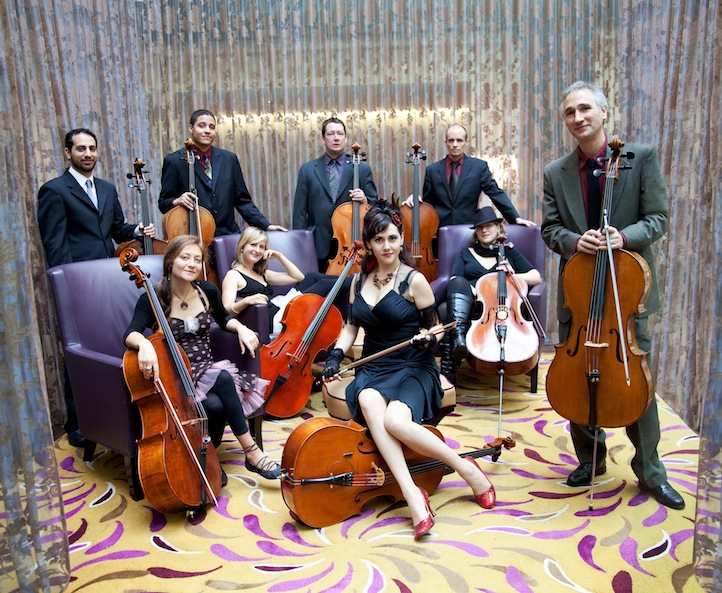 For orchestral arrangement writer Doug Jenkins and the classical ensemble the Portland Cello Project, hip-hop and classical music have more in common than one might think – Just listen to their flip of The Throne’s “H*A*M.” With a set list that now puts historic pieces alongside modern day hip-hop anthems, the orchestra is looking to bridge the gap between the two styles of music and show that good music is well.

When did the Portland Cello Project start?
Doug Jenkins: The group started about five years ago, randomly. There were a lot of classical music groups who were trying to play in bars and unusual places to bring classical music to the people, like Matt Haimovitz playing the cello suites at CBGB’s for example]. We thought we’d try the same thing, but we quickly evolved away from classical music to a place where we were trying to bridge all musical communities together, collaborating and respectfully adapting.

L+T: What’s your role in the group?
DG: I write the overwhelming majority of the orchestral arrangements, produce the records (I run a studio in Portland). And, I play cello in the group. I basically run everything except for the booking and PR. We’re an independent group, so a lot of what we do is DIY.

L+T: At what point did you start incorporating non-classical pieces into your set?
DG: Maybe the third show. And it was immediately clear it was a good idea. From then on, we’ve sold out every single show we’ve played in Portland.

L+T: When you first heard The Throne’s “H*A*M,” what was your reaction?
DG: I listened to it over and over. The structure, the textures, the lyrics and just the overall idea of the song. Like JAY Z describes in Decoded that hip-hop can be a creative exercise using the form of 16 bars explaining why you’re the best at what you do. “H*A*M” takes that to the utter, absolute extreme not only lyrically, but musically.

L+T: What’s the process to play that song as an orchestral piece?
DG: I’ve scored and re-scored that one a few times to make it work. It seems like in each re-write the key was to just make it bigger. More horns, more winds, and way more cellos to give it the depth. We put a chorus in at the beginning just because, without lyrics in right away, ours would have lacked that initial punch – the chorus is so big. Otherwise we’re true to the structure. A lot of extended technique and flutter tongue and stuff in the winds and brass were used to do something like that ascending synth figure Lex Luger used a lot on his songs that year. For the players, it’s pretty natural. The rhythms in the rhymes make total musical sense, and where you hear parallel grammatical structure you also feel parallel rhythmic structure, so musically in translates to an instrumental naturally. For example, that section where JAY Z’s rhymes all use the conditional perfect tense: “Y’all motherfuckers would have been moved/Y’all motherfuckers would have been chewed.” It’s all rhythmically very logical and natural to follow.

L+T: PCP has also done Kanye West and other Watch the Throne songs. Why them?
DG: We recorded a lot of other songs by other producer/composers that just didn’t sound as good in the end with us doing them. We decided no matter what when choosing the cuts for the record that we’d not pay any attention to anything other than how good the songs sounded in our specific recordings, regardless of the originals, regardless of if they were all by the same folks. We just wanted to make a good record. Kanye West’s stuff, whether it’s a piece he’s producing himself, or whether it’s something someone else produced he’s a part of, has a consistent and impeccable quality to it. Both the small details (the sounds and textures), and the big picture elements (how sections contrast, and even just the way his bridges are actual functioning musical bridges), lend themselves to being great instrumental pieces, because there’s so much depth to the musicality.

It’s definitely annoying when people come up to me at our shows at tell me that we made Kanye West enjoyable. Frankly, I barely changed anything but the instrumentation, and in performance we try to stay as true to the spirit of the songs as possible. The people that hate on Kanye West don’t seem to understand that, all the things they complain about, they would have complained about with Beethoven. Beethoven also didn’t know when to keep his mouth shut, dealt with heartbreak in similar ways, and alienated himself, but, he was a great composer, and an artist who wrote music from a very honest and human place. Their musical structures are even so similar. I think it’s a mix of being closed-minded and not knowing anything about Beethoven that keeps people from making that sort of connection and accepting Kanye’s productions/compositions as great music.

L+T: In terms of cultural impact, do you think hip-hop music will ever be put in the same echelon as classical?
DG: It’s all perspective. I mean, hip-hop is the most vibrant and influential American art form around today, hands down, and anyone who doesn’t realize that is simply ignorant. So what echelon does that put it in? The bigger question is, will the disparate groups of American culture ever be able to break down their differences and open their minds to see the value in all art forms. Music is supposed to be universal, isn’t it? There are so many barriers to break down in this country for that to happen. Cultural elitism and racism are rather powerful forces keeping us all apart.

L+T: If you had to make an album of classical takes on hip-hop songs, which would you choose?
DG: Like recreate a whole record? If you mean a whole record, I’ve been thinking a lot about The Roots‘ Things Fall Apart lately as a complete, overarching work. That’s a special record compositionally and texturally.

L+T: What’s your favorite classical sample in a hip-hop song?
DG: I really like the use of the “Franz Liszt Totentanz” in [Juelz Santana‘s] “Second Coming.” (I think that’s a Just Blaze produced/composed track?) He takes it to a pretty epic place, which fits the feel of the original. That and that it’s the “dance of death” in an inspirational Nike setting is a pretty fun irony. I actually hope no one ever uses “Carmina Burana,” again, just because it’s over done. But, maybe I’m wrong about that. That’s the cool and unpredictable thing about hip-hop producers. The second I say that, someone will use it in such a creative and unique way, I’ll have to eat my words.

L+T: If you’re trying to get someone into classical music, what would you introduce them to?
DG: Maybe something modern that’s relatively universal, but not too popular. Like spiritual minimalism. Like, Arvo Paert. Or maybe John Tavener or something. If you really like rhythms, Arvo Paert. Maybe start with that Gideon Kremer recording of “Fratres (1)” or “The Cantus for Benjamin Britten.” If you really like textures as opposed to rhythms, try John Tavener, like that Svyati album with Steven Isserlis playing.

L+T: So what’s next for the Portland Cello Project?
DG: Lots of touring for the next six months! And then…where the wind blows next…