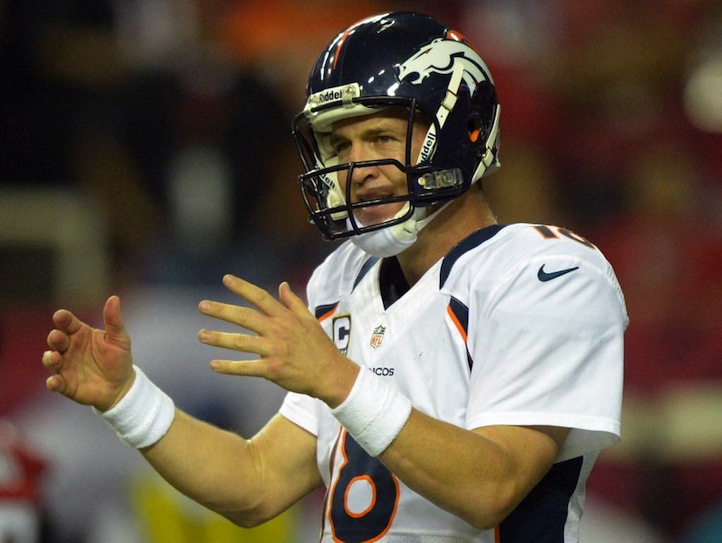 After his impressive Denver Broncos debut last week, Peyton Manning imploded on a national stage in Week 2. For just the second time in his career, the unflappable quarterback threw three interceptions in the first quarter of the Broncos 27-21 Monday Night Football loss to the soaring Atlanta Falcons.

The last time Manning had such a lousy outing, it was on November 11, 2007, when he threw a total of six picks in a 23-21 loss to the San Diego Chargers. Despite Manning’s blunders, the Indianapolis Colts were able to rally late and were a field goal away from pulling out a victory. Unfortunately, kicker Adam Vinatieri missed the 29-yard attempt for the Colts. Fast forward to Monday night, the Broncos version of Manning’s uncharacteristic performance, happened inside of the Georgia Dome, and all three picks were deep bombs that will have many wondering just how much zip the 36-year-old quarterback has in his arm. To his credit, the Broncos did march back from a 20-0 deficit to make the final score 27-21, but unlike what his little brother Eli was able to accomplish on Sunday, the early picks were impossible to overcome.

Manning has been reminding his teammates and fans alike not to rush to judgment, urging us to remember that though he is on the field for Denver, he is still a work in progress. Being the ultimate competitor that he is, the Eli’s big brother fought back, helping the Broncos to get within one touchdown in the final quarter. But the Falcons ran out the clock, handing Manning his first regular-season defeat since December 5, 2010.

In spite of his Week 1 success against the Pittsburgh Steelers, Manning’s overall game is not yet nearly what it once was. Last week, he completed 19-of-26 passes for 253 yards, two touchdowns, no interceptions and a 129.9 passer rating. Monday’s performance is a stark comparison to last week, as Manning completed 24-of-37 passes for 241 yards, one touchdown, three interceptions on each of the Broncos’ first three possessions for a low 58.5 QBR. His mind is as sharp as ever, but his arm –and his ability to drive the ball downfield– is still off, stemming from his season away from the field after neck fusion surgery. He lacks the arm strength to drive the ball without the use of his lower body, so added pressure by defensive lineman who can penetrate the pocket can make it difficult or prevent the four-time league MVP from driving the ball down field.

To be fair, Manning is still one of the best quarterbacks to ever play the game. The picks could have been a result of miscommunication by the Broncos. Mistakes like what we saw from the former Super Bowl MVP are to be expected, but I highly doubt that we’ll see any sort of game in the future in which he makes so many of them that early. Still the question remains: Can Peyton get the job done for the Broncos? It’s impossible to tell after only two games. Let’s see how he does next week against the Houston Texans back in the Mile High– just remember it’s one game at a time.