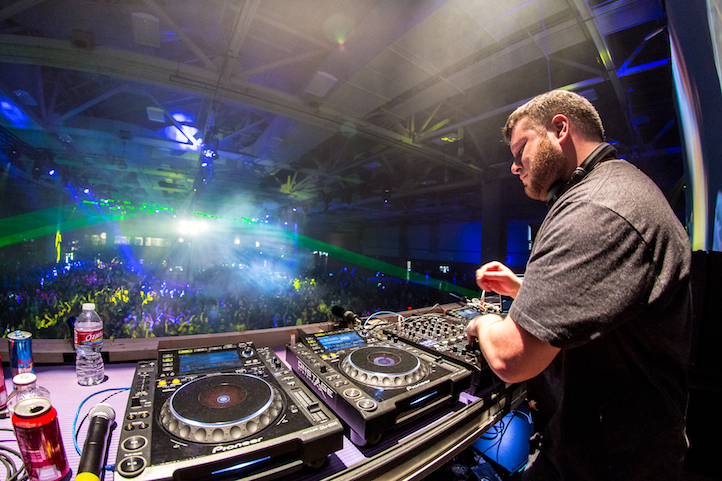 “Hi! It’s so nice to meet you! I know Chris Lake,” an overeager EDM superfan boasts to LA based producer, Nom De Strip, as he catches his breath from performing an hour long live set at Lights All Night. Only if you know the ties between producer Chris Lake and NDS would you understand the super fan’s “need” to name drop. Nom is a Rising Music signee – producer, Chris Lake’s label. In a coy, Scottish (he really is from Scotland) schoolboy manner – Nom acknowledges the guest’s presence with a subtle smirk and agrees to strike a pose for the smartphone camera with the superfan before being rescued by a LAN publicist. If Nom’s understated dress (donning a cat and pizza tee à la Urban Outfitters, with a pair of dark denim relaxed fit jeans, and a comfy pair of trainers) was any foreshadowing of his live set you’d be sorely mistaken. His boisterous LAN performance was anything but low-key. It consisted of a recipe that’s signature NDS: a balance of musical ingenuity combined with a wealth of experience. He seamlessly layered electro house stunners with dirty staggering basslines while infusing a yin-yang coupling of minimal to heavy percussion, and occasional incongruent rhythms (odd time signature of Nom and Chris Lake’s “Come On Surrender” remix). Based off of the neon ant farm appearance of the crowd, the effect was positive and caused the festival goers to flock to the stage in droves.

We make our way to Nom’s trailer outside of the Dallas Convention Center where LAN is being held and proceed to reminisce about the highlights of 2013 (before getting sidetracked about playing Need For Speed on Xbox).

Life+Times: Back in September, Chris Lake said that “people not finding their own style and just playing what other people play [is] a letdown for me.” So, how can an artist – particularly you – continue to have an original style while being able to have the audience involved in the show?
Nom De Strip: I think it depends. I’ve been DJing a long time, so it kind of depends where in the time period you’re talking about. When I started, you’d buy records, you’d go to the record shops. Once that record had sold out, that was it. It was all about the kind of way you would mix the record and not so much about the production then because it was a lot less people producing. It was all DJs and a lot more effort put into the craft of DJing. Whereas now it’s more about what you do and beforehand really. There’s not too many DJs now who are that kind of old school way of DJing like TJR or A-Trak obviously scratching. I spent the last 16 hours editing songs for my sets – taking elements that people are familiar with, but then doing your own thing which is all quite easy because of all the software there is now. You can load your songs and it all comes out like these ones are in the key – it should work together. So yeah, that’s something I think is worth putting an effort. You can’t just be the kind of traditional guy, sort of mixing because people don’t really know anyway – they’re not so bothered, most of your average person in the crowd. You have to give them what they’re familiar with, but kind of do it your own way. That’s the way I do it.

L+T: There’s a new generation of listeners that follow dance music. They’re not really used to turntablism since the introduction of the new technology for producing records.
NDS: Exactly. So many people are very young now. I think of the acapellas and vocals I want to use and I’m thinking, ‘Well, nobody there even knows what I’m talking about. If I play this it’s just gonna be like, “Huh?”’ Doing these festival shows is completely different from doing the club shows. It’s all kind of a learning curve. It’s been interesting. I’ve known TJR for a long time since he was a DJ that was just struggling along. Now he’s blown up, which is pretty interesting because he’s really kind of technical in the way he thinks about things and analytical. We talk all the time about the difference in doing the festivals. I think it really is worth putting the effort. You can’t just assume everything you do everyone will appreciate it.

L+T: You brought out in a past interview that with producing you feel like 10% of it is creativity and 90% is getting it right.
NDS: For me, I’ve been doing it a long time and [was] kind of on-and-off at the start. The more you know, it’s not necessarily a good thing because you spend more time on tweaking these bits because the bass has to be just right instead of concentrating on the feel of the track – which when you start out that’s all you know. The more you learn about production the better, but at the same time it really slows down the creativity. The analytical can take over which is good to a point, but it can be frustrating when you’re just trying to write music. ‘I’ve been sitting here making this kick drum all day.’ It’s like in the old days I would have had a whole song written by now. It’s less fun and is more work. It’s still fun, but it changes as you progress as a producer.

L+T: I can imagine that would be a challenge. What else would you say is difficult for you as a producer – specifically in the area of composing records on the road?
NDS: I can fit everything in with the traveling because I’m not touring three times a weekend like some people. Even when I am, I can work on my laptop [and] I can work in headphones – not necessarily sitting on an airplane and being scrunched in like a T-Rex. I work at home sitting in bed. You only get a couple of days a week at the most in your studio, so you really have to be quite good at your time management – be efficient when you’re producing. It can be a problem.

L+T: Now that you have a routine, do you find it easier to produce on the road or in the studio?
NDS: It used to be where I would find it a lot easier to produce just in my headphones – the ones I use for DJing – which I always found to be a nice balance, decent sound, and accuracy. [It’s] also fun to listen to. I always found it strange because I got so used to doing that because my wife’s from Vancouver Island and I’m from Scotland. I was kind of doing the back and forth, but I didn’t have a settled studio particularly. So, I just got used to doing it that way. Now, I’ve been using a room. Chris Lake’s got a nice little area in Hollywood. He’s got a nice studio set up and I’m very lucky that I can go in whenever I want and just sit down and blast the music really loud. When you get used to doing that, it’s like suddenly when I go back to the headphones, I’m like ‘This is not the same.’

L+T: That’s a big contrast! 2013 was filled with new releases from you. There was the Clouds EP Vol. 1 and Vol. 2, then the Congorock collaboration on “Minerals,” and you’re most recent release is “I Can’t Believe.” What do you have planned for 2014?
NDS: There’s not even a good answer for that right now.

L+T: Ah! You have to give me something. I know some releases and Rising Music updates are hush-hush, but what can you talk about?
NDS: I have to choose some sort of direction. The Nom De Strip stuff that I do is only 20% of the time. I do a lot of mixing work for other people and production stuff which I really enjoy. We have to sort of decide if we’re pushing me more towards doing the gigs or pushing me towards doing more pop production and that kind of thing. It’s really for me to decide. I just like a bit of everything. Plan wise – as far as I’m concerned – just more of everything. I think with the Nom De Strip stuff they’re kind of keen to pushing me toward making it a kind of advert for the other production I do. When I’ve been doing that, I’ve been working on doing other styles of music. When I’m doing the Nom De Strip stuff, I’m really pumped up to do dance music. It’s all about finding that kind of balance. That’s all to be decided in 2014.

L+T: Sometimes it’s best to not have a plan and let things just fall together. I end all my interviews with producers with this last question: Do you think a DJ is a musician?
NDS: I think they can be. It depends on how you do it. You can be very creative or you can just stand there and press ‘play’ on a CD. That’s not being creative. I don’t even know what you would even define as a musician. It can be an instrument. It (DJ software and equipment) makes sounds, you can manipulate it- that actually makes it an instrument. I’d say yes, definitely.