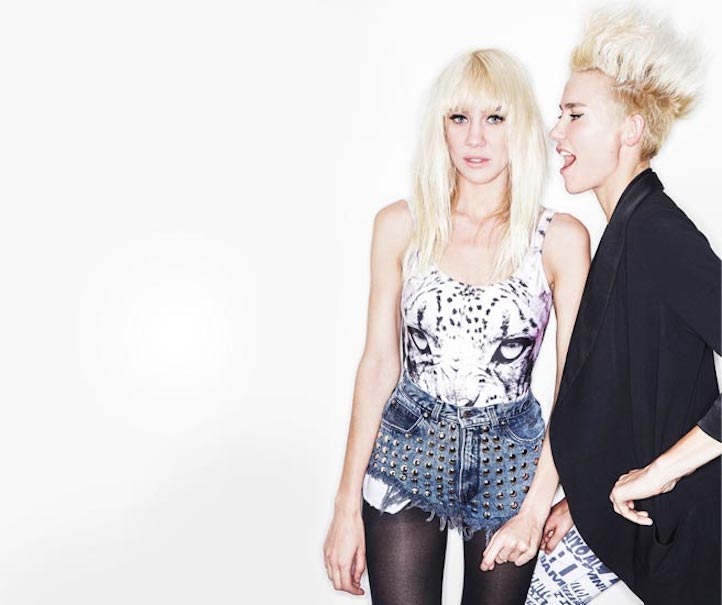 Today marks the release of NERVO’s two-disc Inspired compilation via Ministry of Sound. The sister DJ duo was invited by the MOS imprint to take part in their Inspired series that allows artists to tell their story through a selection of influential past and present records. Both discs – “Past Inspirations” and “Present and Future Inspirations” – highlight NERVO’s eclectic muses and tastes within the ever-evolving electronic dance music world. Liv states, “Inspired was a guilty pleasure that we wanted to do because it’s just such an original concept.”

Mim and Liv have also spent the year working on a new album that’s due out later this year. “We finished our album and we’re currently just signing it to a different new record label. We’re going to have loads of new music out this year which we’re really excited about,” Liv confirms. Inspired features one exclusive new track, “Sunshine Through Rain Clouds,” but the new album will consists solely of NERVO originals. Liv adds, “We have a lot of our other records in there (Inspired) like ‘Reason,’ we have ‘Not Taking This No More.’ So we did have a lot our records that we’ve already released, but the new album’s got predominately all new music.” The duo is currently on tour and will return stateside for their landmark performance at the first-ever US edition of Mysteryland this weekend.

Life + Times: I had a chance to listen to the Inspired compilation – which I love. Was it a long process deciding which tracks would actually make it onto the compilation? Tell me a little about the process.
Liv: Ministry approached us and it was the second time that they’ve done this kind of thing. The first one they did with Tommy Trash and we really like the whole idea behind telling our fans a little about our music influences through the music instead of through an interview; tell the story through the music. So, that’s why the idea of it was really appealing because we fell in love with house music in the early 2000’s. I don’t think that love has ever left us and it’s definitely evolved into what it is now. It was a lot of fun to just pick records, you know. We made a massive, massive list of records and not all of them could get cleared. The ones you have on the discs now are the ones that we all managed to get licenses and clearances for. It was quite a bit of work involved in that, but it was fun. We’re really happy with the results actually.

L+T: You definitely can tell a lot of work went into it. Acquiring licenses can be the biggest challenge. Regarding Inspired, you both brought out in an interview that “all of these records hold a special place in our journey.” So, I chose a couple of tracks that I particularly wanted to get the story behind their inclusion onto the compilation. Let’s start with your original track “Sunshine Through Rain Clouds” featuring Duane Harden. How did that come about?
Liv: So, we’ve been good friends with Duane for about three years. We first met when we were in Ibiza and we’ve always been massive fans of his. You know, he was the vocalist on the Armand Van Helden record, “You Don’t Know Me,” which was a massive influence to us. I think that came out back in 2001 and that was when we really fell in love with dance music, dance culture, and all that. So, then when we met him we were a little bit starstruck and we struck up this friendship. We’ve always spoken about working together, but never could quite get the schedules or just whatever. So, when this came out we really wanted to get across that we love soulful house music in the Inspired collection. Soulful house doesn’t really have the same traction that it used to in the mid to late ‘90s. It still has a lot of traction in the deep house world and even the tech house world, but in the more kind of EDM big room area that we’re more involved in, it doesn’t really have kudos. So, what we wanted to do was merge the worlds and that’s what we do through “Sunshine Through Rain Clouds.” We wanted to have that soulful element, but still keep the track quite relevant.

L+T: That soulful element permeates throughout the record. You girls did a great job on that. Now as far as the “Past Inspirations” disc goes, you picked “Finally” by Kings of Tomorrow featuring Julie McKnight. How did that record play a role in your life?
Liv: Yeah, we love that record. Again, another soulful house record. You know, it just takes me back to that time where we were working in music, trying to make music and get ahead; but then, we’d go out on the weekends and that song was just really big at that time. So, now to fast forward to almost ten years later and we “made” it in some respects. You know, we’re in the scene, we’re working full-time, we don’t have to waitress anymore. It’s a nice memory. That song used to be a staple on the dance floor for us and now we can make those records for other people.

L+T: It’s funny you bring that out. I’ll listen to certain songs and for me I have one – Kenny Dope and The Bucketheads’ “The Bomb!” – that song whenever I hear it I am taken back to a fond memory in the past. That’s what’s so cool about this compilation. It’s something where you have your current tracks, but you have this collection of feel-good tracks that you can listen to and feel like, ‘Man, this takes me back to when this happened!’
Liv: Totally! Songs and smells can just bring you back.

L+T: Yeah, that’s very true!
Liv: Three years ago, well, four years ago in Miami – it must have been at the beginning of our careers when we were working really hard, touring and making music and just constantly exhausted, but I remember this one trip to Miami we had a day off and we stayed in this hotel. Now that same hotel smell – I’ll find it randomly in other hotels around the world – it’ll shoot me back to that feeling of that day off in Miami. (Laughs)

L+T: It’s crazy how our senses work. Another quote that I have here from a past interview, you and Mim said, “Music is forever evolving, but classics are forever with us.” So, from that quote I kind of dissected it into two questions; the first one being related to dance music’s evolution. What would you say is the most significant change you’ve witnessed in the evolution of dance music?
Liv: The soulful house in EDM doesn’t get the traction and kudos that it definitely used to. I think the last big soulful house record in EDM was “Leave The World Behind” by the Swedish House Mafia. That was quite a long time ago now. And so the vocals are definitely moving in a different direction. I think sonically it’s changing. It’s a lot tougher, the energy is a lot higher in a way because there’s a lot more going on. So, I think tracks in the past had a little more patience. There’s a lot more groove in them, but whereas now there’s, like, higher energy. I think that’s a big difference.

L+T: To your point about the energy and sound, there was a lot more structure. Now you have so many hybrid genres and subgenres. You can’t really classify certain songs like, “This is house. This is techno. This is just dubstep.” As for the latter part of the statement you both made about classics, everyone has their own definition of what constitutes as classic. I noticed for the compilation you both included the late Frankie Knuckles and Fatboy Slim. So, personally, what would you define as a classic? What makes a classic artist?
Liv: That Frankie Knuckles record, “My Love,” has been remixed time and time again. Its’ been mashed up time and time again. I think that is really when something becomes a classic – when people from other genres and other eras take your work and rework it. So, I definitely think that’s Frankie Knuckles. Who was the other one that you said?

L+T: Fatboy Slim.
Liv: Fatboy Slim is just one of those (pause) he’s really in a lane of his own. He’s such a creative artist that stands out from anyone else and he’s stood the test of time and he’s outlived the eras. He’s been around a really long time and he’s still cool, you know what I mean? He hasn’t disappeared with the fashion, if anything he’s kept them moving forward.

L+T: You’re right. He hasn’t lost his relevance. His music is timeless, really. I have one last question for you and this is regarding musicianship. I ask every DJ-producer this, so I have to ask you. Do you think a DJ is a musician?
Liv: Is a DJ a musician, I think? Yeah, I do. I think to DJ just itself, like even if you don’t make music, I think that’s a skill and there’s an art to it. What’s great about DJs these days is a lot of them are actually music makers themselves. So, they’re absolutely artists and musicians.

Inspired is out now via Ministry Of Sound on iTunes.