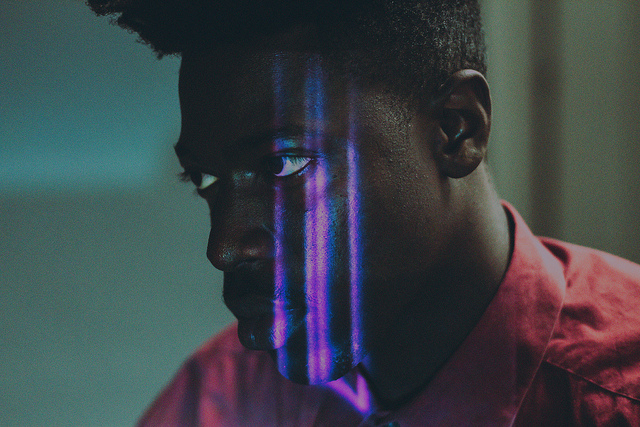 One of the more intriguing up-and-coming artists in 2014 has been Moses Sumney. Though his exposure had been limited to a couple live performance videos floating around the web and some Soundcloud recordings, the 23-year-old LA-resident, singer, and self-taught guitarist offered more of a taste with his first project, the five-song EP, Mid-City Island which was released this past April. Mid-City featured much of the emotive vocal style at the root of his rising popularity. Since then, he’s played shows from LA to New York, and been featured on Beck’s new album.

Life+Times spoke with Sumney about his debut project, unique style and looping his own voice.

Life+Times: One of the most engaging things about you is your recording process. Many times, you’re looping your own voice. How did you start with that?
Moses Sumney: I started looping because I would hear a lot of music and overlapping parts in my head, and I needed a way to express those ideas. I wasn’t using any kind of computer software because I couldn’t afford it. So, the easiest way to do it was to just use a loop pedal and record those ideas. I have a method or writing songs and figuring out arrangements, so at some point, I decided it might be cool to perform live like that. I’ve kind of added it to my live set in which I play guitar and sing for most of it, then for two or three songs, I’ll use a loop pedal just to add on to that.

L+T: You’ve got a couple videos online [“Replaceable” and “Everlasting Sigh”] that have gone viral and helped you generate this buzz. How have you seen those propel you to the place you’re in now?
MS: Yeah, it’s cool. I wasn’t really expecting anybody to see them. The first video [“Replaceable”] I did was at a place in LA called Mochilla, they got a lot of their content after accidentally catching me open for KING and asked if they could shoot a video of one of my loop songs. So, I did that. Soon after that, I did a performance opening for Tony Allen at The Mayan Theater in LA and filmed it. Afterwards, ArtDontSleep put the video of “Everlasting Sigh” online. It just so happened that those two performances were maybe a few weeks apart, but they ended up going online a few months apart, so it was a nice way to help build awareness of me. It definitely helped a lot more than I thought it would. I think it was those videos coming out and also the stuff that I had up on Soundcloud which was almost dramatically different from the videos. Having an online presence definitely helped spread the word.

L+T: Talk about the name and concept of Mid-City Island. You’ve said a lot of the songs were done in one take.
MS: I had never really recorded myself before and I’m looking forward to going to the studio and making “more legitimate” recordings, but this was a way to start my process of recording. A producer friend gave me a four-track recorder from the ‘80s that he’d been using for a long time, so then I started making stuff in my room to cassette tape. I kind of just fell in love with that process; the process of recording was very insular and very independent, creating by myself in my bedroom where I live. I live alone in the middle of the city, so I just felt like I was creating in isolation because the project I made is so different than a lot of stuff other new artists are putting out in that it’s a lot less polished and very raw. I felt like I was creating independently because I was doing it by myself in the middle of the city where I live. That’s where the idea of “Mid-City Island” came from: creating in isolation in what felt like somewhat of a vacuum. Not only am I fond of improvisation and rawness, I also needed a way to get it out of my own head and get over the fear of making mistakes in the recording process and creating something that wasn’t perfect. So, I went to the dramatic extreme of, “I’m going to record myself a few times and make up some ideas, as well.”

L+T: “Man On The Moon” was the first single, and “Mumblin’” is really dope and comes from that self-looping recording process. Talk about those two records.
MS: Absolutely. “Man On The Moon”, what can I say about that? It’s a song I wrote about being alone, kind of going along with the theme of creating and existing in a vacuum in isolation. “Mumblin’” was a fun one because it was the last song I did for the project. I make songs all the time and a lot of my loop work is a result of me making stuff up and going along with it, and I thought it would be cool to record myself making something up. I started the loop a little bit before I started the recording, then I hit the record button, and just created it. It’s kind of layered, if you listen it’s hard to hear what I’m saying because I’m not really saying anything, I’m just going along. Once it was done, I was just like, “This is kind of cool, I’m gonna put this out.” [laughs] It’s the only song on there that’s completely improvised and it’s called “Mumblin’” because I’m kind of mumbling on it.

L+T: As a songwriter, do you write your lyrics independent of the music? Or do you come up with the music first? Or maybe it’s different on every song?
MS: Right. It’s a little different on most stuff, but currently, I’m moving past the point of being obsessed with lyrics and placing all the weight on lyricism. I did poetry in college so I came from a place of being really into writing lyrics. Lately, I’ve been getting more into the role of trying to be a musician or making music as a opposed to creating statements. I think this body of work, particularly, [exemplifies] that. “Mumblin’” doesn’t really have words, the last song “San Fran” is about mood – the whole thing is about capturing a mood. For this project, a song like “Man On The Moon,” the guitar came first, then the melody. That’s how you’ll hear me structure my songs, then at some point I’ll come up with the lyric content or an idea or maybe one lyric jumps out at me like “man on the moon,” and then I build the entire concept around that. For most of the stuff out now, it’s usually the music first and then the lyrics. Sometimes I will start with a lyrical idea like “Everlasting Sigh.” It does vary.

L+T: You were born and currently reside in LA, but also spent time in Ghana. What influence have those two places had on your music?
MS: Yeah, people ask me about that a lot, and I’m really not sure how much having lived in Ghana effected my music directly. I don’t think it has as much of an influence as one might expect because I never listened to Ghanian music, and when I lived in Ghana I wasn’t listening to local music, I was listening to Western pop and R&B music. That’s really what I was listening to, and mostly, I was writing. At some point, West African music probably got into my system subconsciously without me really realizing it, but there was never a point where I was listening to it and said, “Oh wow, I’m inspired by this.” Folk-wise, there’s a lot of great African and West African folk music, but I wasn’t really listening to any of it. When I moved to LA, I think I had been listening Sufjan Stevens and Ray Lamontagne. I think that’s when I started pulling that aspect into my music folk-wise.

L+T: Going forward from Mid-City Island, what’s next for you?
MS: Right now I’m going on tour with Local Natives across the US. After that, I’m really itching to go properly record an album, so I’m going to take some time to go away and focus and write and record a full album. I think that will be really interesting because there’s a lot of different sounds people have heard come out of me, so I’m really looking forward to making a more official project. That’s in the works. It’s not done, it’s not made yet so I don’t know when it will be out, but hopefully as soon as possible.