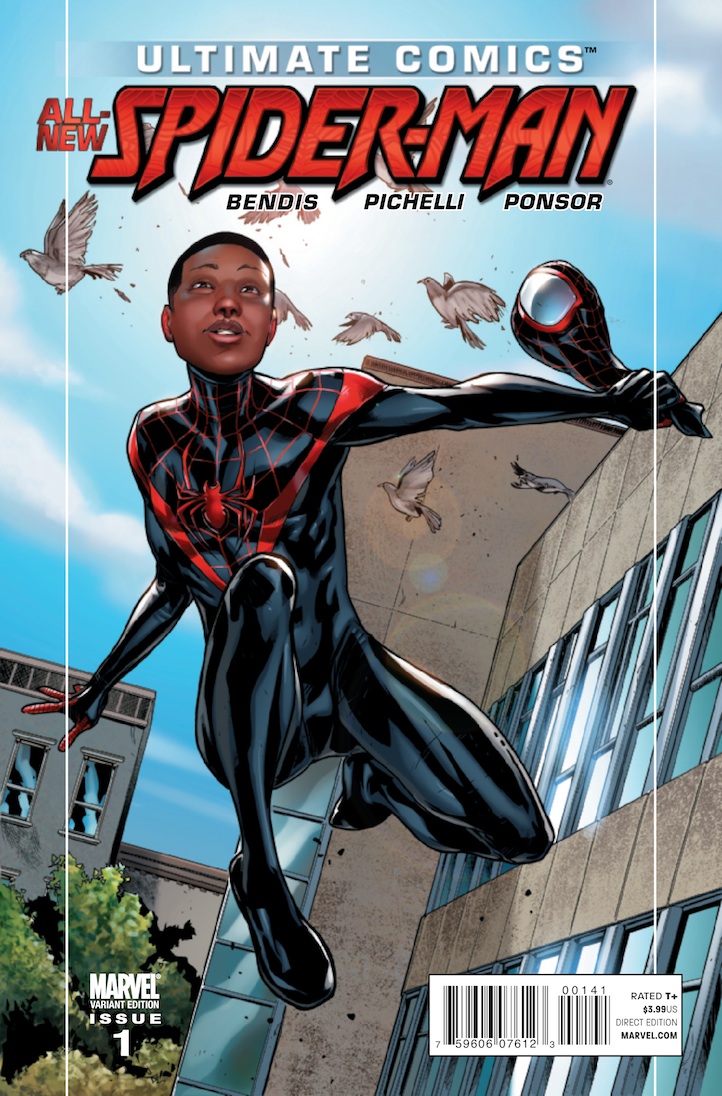 Axel Alonso was appointed Editor-In-Chief of Marvel Comics a year ago and the comic book creator hasn’t wasted anytime ushering the iconic brand into the future. This past fall, Marvel rebooted the Ultimate Spider-Man series and put a with a new spin on our neighborhood friendly superhero. With great power comes great responsibility, and Alonso knew in order to be successful in this new leadership role, he had to take a risk. So when it came time to make a decision to kill off Peter Parker and replace the popular character with a biracial teenager from Brooklyn– Alonso pulled the trigger.

It’s been four months since the world was first introduced to Miles Morales, the half African-American and half Puerto Rican successor of the beloved Peter Parker as Spider-Man. Miles has received an overwhelming reception from fans –new and old– across the globe –as Ultimate Comics Spider-Man #1 broke the first day sales of new releases in comics digital download history– and some detractors in Glenn Beck. Still, as Miles continues to swing into action as an important milestone in comic-book history, Life + Times sat down with Alonso to discuss Marvels new direction, race in Hollywood, hip-hop and Tim Tebow.

Life+Times: In 2008, we elected the first African-American as President of the United States. Fast forward four years later, Marvel is at a milestone and replaced Peter Parker as Spider-Man and created a biracial character by the name of Mile Morales to fill the popular role. How did it all come to fruition?
Alonso: Well the first time we seriously discussed an African-American Spider-Man was several months before Obama became President. He was in the midst of the election. And this was in one of the group discussions and the timing wasn’t right because you may want to do it but your ducks are not lined up. So what happened was, we where in the midst of a retreat discussing a story that became titled “The Death of Spider-Man” in the Ultimate Universe and it became apparent for this story to work, we had to kill Peter Parker. That if we stop short of that, and realize that we were going to end this guys life, if you’re going to do that with a popular character than the question becomes: Who’s going to replace him? And that’s when we said, “remember when we were talking about…well, maybe now is the time.” In the context of that conversation we started to think about how, maybe it’s even more potent if he was more mixed raced. A number of us on staff are. I’m mixed raced in Mexican and English. And we discussed this and we said you know, that’s a little bit more in line with the shape of America right now and that’s why we decided to go with Miles Morales. He’s half African-American and half Puerto-Rican. So he is of mixed descent.

L+T: Was there any trepidation killing off Peter Parker?
Alonso: Yes, with out a doubt! Peter was a popular character and we knew we were going to hear it from fans. It was hard for us to do. But, no guts, no glory. At the end of the day, sometimes you just have to take that shot. Why I’m proud of Marvel is because we decided to gamble our bottom line. We were going to take away a character that we knew we could sell and replaced him with a character that we had to gamble to sell. And it has worked out beautifully. People are embracing Miles the same way they did Peter.

L+T: In the original conversation was Miles consider to be the next Spider-Man or another Marvel character?
Alonso: We started by saying we’re going to go with a Spider-Man of mixed descent. And from there, the writer Brian Bendis sculpted Miles. So we started with this demographic and then began to invent the personality. That’s when Bendis went in and decided this is whom he is and this is where he’s from. And we sculpted the character, mostly, from his lead.

L+T: Have you faced any backlash from the new direction?
Alonso: Well, initially when we did it, we heard a lot. Whenever you do something controversial and whenever you do change in comics, you’re going to hear it. It has a political component or social component– you’re going to hear it a little louder. I don’t think any of us are quite prepared to have Glenn Beck complain about it. I love Beck quite frankly, he says, ‘no problem’ on the phone to me, I wish! But the long-short of it is that we heard it but this is always the case. Ultimately, you hear the second round of people, the people that will support you and then how you know they support you is by spending their money. When we released the first issue of Ultimate Comics Spider-Man it broke our download records. So there’s a lot of interest in this and the accessibility in downloading it I think was a factor in promoting his appeal.

L+T: Obviously with the creation of a new Spider-Man you had to create some new powers. You guys invented the “Spider Stinger” for Miles. How did that evolve?
Alonso: When Brian [Bendis] was discussing what the difference would be cosmetic or otherwise between Miles and Peter, power set became the first thing address. One of the first differences is that Miles has a camouflaging ability that Peter Park never had. It’s kind of like the [the alien in] Predator. So he can just, like a chameleon, blend into a background to be indecipherable. Also he has these venom sting bots that he does, so he’s a little bit more like a spider and he can hurt you that way. He has the super strength and the agility that Peter had. Right now, fans are going crazy because they’re wondering if does he have those webs, because webs are synonymous to Spider-Man. I’m not going to say that he’s going to inherit those webs, but I will say that we haven’t learned all his powers. Let’s just say, if Miles is going to have web powers, you’re going to find out the same time he does.