In collaboration with Complex, rap group, Migos recently premiered their trap musical, Bando. Written and directed by Rik Cordero, the short film, featuring songs from their latest album, No Label 2, loosely details the Georgia-based trio’s come up and their journey from trapping in the”bando” to being major without a deal. Bando is the latest in a series of milestones for the “Versace” rappers, which includes charting two singles on Billboard‘s Hot 100, working with the likes of Drake, Justin Bieber, and R. Kelly, and having one of the most copied hip hop flows in recent memory. “Everybody got a little piece of that Migo-flow, from New York to LA,” says group member, Takeoff. “I’m feeling like we changed the game and we opened doors for others.” Speaking with Life + Times, the group – comprised of Quavo, Offset, and Takeoff – discusses the origins of Bando, being inspired by Streets Is Watching, and the possibility of going solo.

Life + Times: Where did the idea for putting a short film like Bando together originate?
QUAVO: Complex had reached out to us and said they wanted to do a movie on our life. We wasn’t sure of what type of movie, but we knew we wanted to do something different. Since we’ve been in the game, we’ve tried to do something different, like with “Versace” and how we changed the flow up.
OFFSET: We were really in the bando. We were living what we were rapping about.
TAKEOFF: I guess they were interested in showing what we were about – outside of the music. I guess that was the motivation. We have a good relationship with Complex. Shout-out to Complex.

L+T: What is Bando about?
QUAVO: It’s about our life. They wanted to see about our life. Not a lot of people knew who we really were. Some people thought we were just one person. Bando shows what we do individually and all together. We blended all of that in with our music. It’s like a trap musical we made. We made it a musical, just like Krush Groove and Streets Is Watching. Those are the movies Bando was inspired by.

L+T: What was it like working with Rik Cordero on a project like this?
TAKEOFF: We had a good relationship with him.
OFFSET: It was great working with him. He really let us do what we wanted to do. He let us bring out our ideas. We all came together with ideas for how we wanted to work the whole movie. It was no scripts. Everything was off the dome. He let us just be us throughout the whole movie.
TAKEOFF: That made it more realistic.

L+T: What was the process like for choosing the songs that made Bando?
QUAVO: We chose those songs, because we don’t have videos out for them and those songs show you the different steps to Migos and our different levels, zones, styles and feels. Like the scene where “Contraband” is playing, that’s the struggle. That’s back when we were still on the block. From there it was just different concepts.

L+T: Did working on Bando get you guys more interested in acting? Will we be seeing more films starring Migos in the future?
QUAVO: Yeah, we were already interested in acting. We’re just trying different avenues outside of music, because we’re all around creative minds.
TAKEOFF: Just wait on it! [laughs] 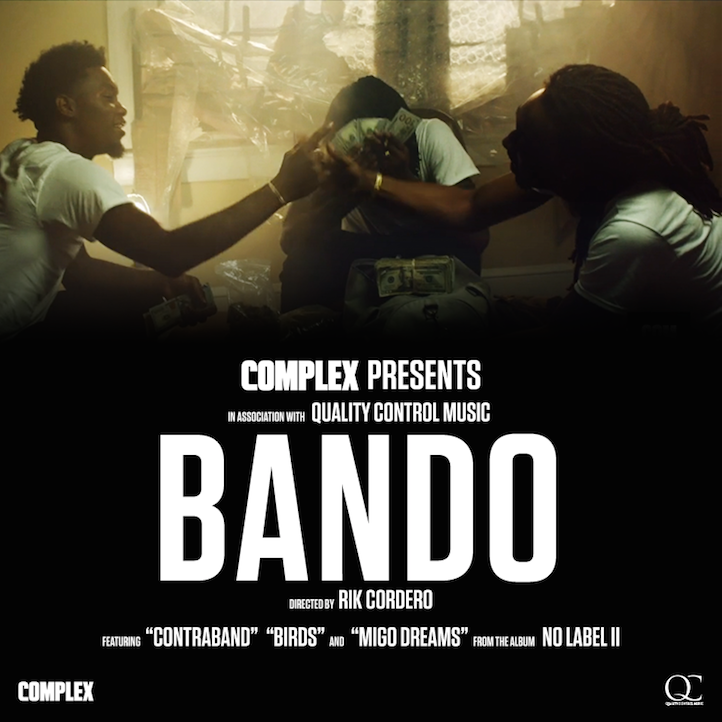 L+T: In what ways have you guys benefitted from not having to deal with the pressures that accompany signing with a major record label?
QUAVO: I feel like it should give us some more respect, because we didn’t need nobody to get where we at. We did it all as an independent label. We didn’t get that extra boost from a major. We did it all ourselves. We sat at the round table, said what we were going to do and did it.
OFFSET: And then we turned ourselves into a major label, because we became major artists.

L+T: Atlanta has been on fire lately, especially with artists like you guys, Young Thug and Rich Homie Quan and producers like Mike Will Made It and Metro Boomin making so much noise. Why do you think Atlanta has been winning in such a major way as of late?
TAKEOFF: Atlanta is the trendsetter now. The rappers in Atlanta are setting the trends.
OFFSET: We got a new flow on the way too. We got to stay consistent and stay trendsetters.

L+T: Does the fact that you guys found success and made an impact so early in your careers create a pressure to have to continue to set trends?
TAKEOFF: We just make our music. We’re blessed, because we could be somewhere else. This could never be too much pressure, because we could be doing something else where we could really have the pressure on us.

L+T: Initially, music was mostly Takeoff’s thing. At what point did making it as rappers become a shared dream amongst all of you guys?
QUAVO: It was all of our dream. There was just a moment where Takeoff was more focused. We knew this from the beginning that even if me and Offset ain’t do nothing, Takeoff was going to go with it. When we all started taking it serious it became all about the music for us.

L+T: Can you see there being a point where you all work on solo projects?
OFFSET: Right now we’re straight. That’s on a whole other level. That’s for a time when we’re ready to change the game all individually. Right now we’re working on setting a solid foundation down.