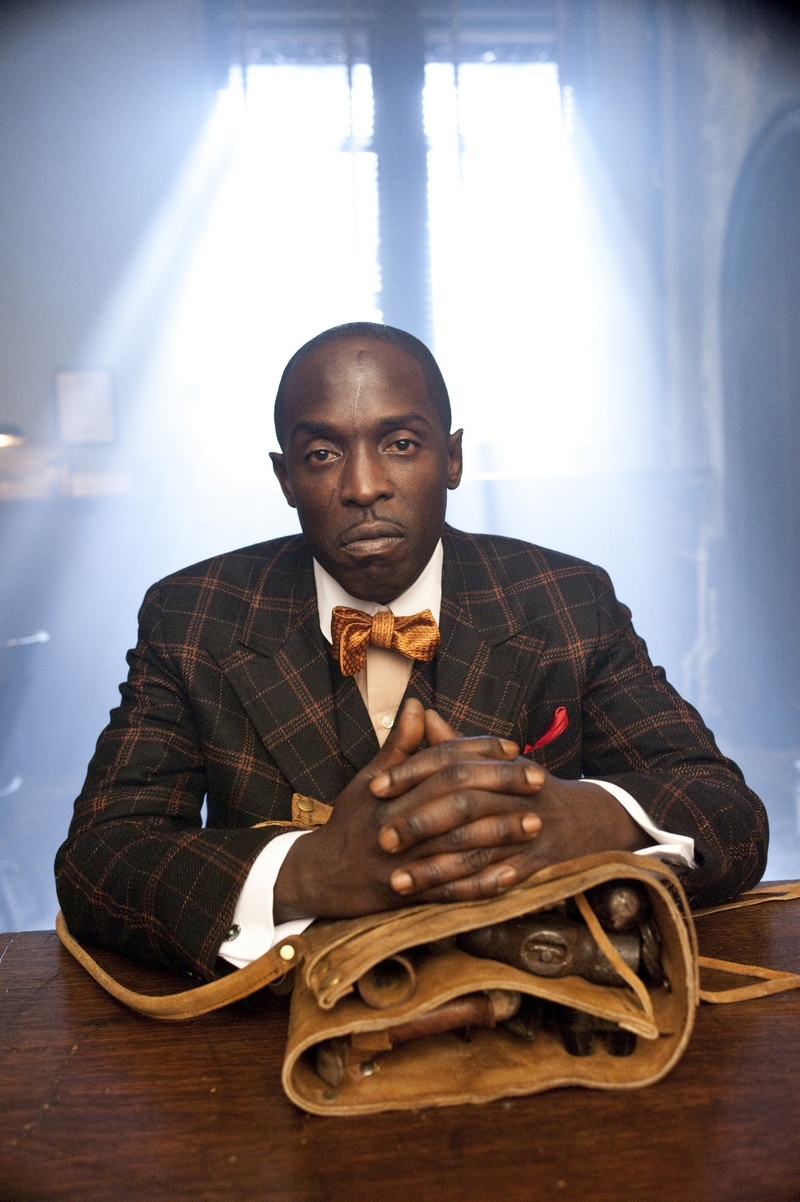 No actor in the last decade, perhaps, has taken on more distinct and memorable characters than Michael K. Williams on HBO’s Boardwalk Empire (as Chalky White) and The Wire (as Omar Little). The success of the shows and the love for the characters he embodies are true testaments to the Brooklyn native’s acting chops, firmly solidifying him as one of the best in the business. The Wire is revered by some as the greatest television series of all time – running from 2002-2008 – and now Boardwalk Empire is entering its fifth and final season, as well. In 12 years, there’s yet to have been a dull moment involving one of Williams’ characters. His evocative presence powers through the screen and interestingly, hip-hop is a key ingredient in Williams’ execution.

In anticipation of the September 7th Boardwalk finale, Life+Times caught up with Williams to discuss his role as Chalky White, his experience on The Wire and more.

Life+Times: How did you come to getting the Chalky White part? Describe exactly who that character is.
Michael K. Williams: I had to audition. I was in Cape Town at the time working on another show for NBC and I got the call that HBO was looking for this character. I put myself on tape and sent it back and they booked me. So, I asked NBC to let me out of my contract and jumped on board back with HBO. Chalky, basically, is the unofficial mayor of the African-American community of Atlantic City which, in those days, was referred to as Chicken Bone Beach. His importance to Nucky Thompson at the beginning of their relationship is that Nucky knew he needed someone in the Black community to help sway votes and that man was Chalky. Chalky realized his position as that voice for the community and used it as leverage to make sure that things ran smoothly in the community. Atlantic City is a seasonal town, so when it was off-season – primarily the winter months – he made sure that folks sill had food, heat, things of that nature.

L+T: Is he a totally fictional character or was there a similar figure who was used as an outline?
MKW: I don’t know if there was actually a Chalky White that lived the life as we know him to have lived in real life. But there was a real man named Chalky White, he was a boxer. Chalky White, I believe, was from California. He’s known as one of the 100 greatest hitters of all time. I have his stats on my Instagram, there’s a picture of him, his fighting record, etc.

L+T: You mentioned Chalky being the mayor of the Black community. Talk about being able to play that role, a very empowered character. The show is set in the early 1900’s, obviously there is still a lot of racism, but you get to play this powerful Black man who stands up in the face of everybody.
MKW: To me, to be called to play a role like Chalky White and what he represented to the Black community, especially at that time, was very humbling for me. It was an homage to my ancestors, my dad, uncles, who lived in that era. It was an homage to them and what they dealt with. I was very proud to play a character like Chalky who came from seeing his father be lynched and [only having] a limited education, but still had the finer things in life and gave his kids the best life he could. That’s the American dream right there. As a Black man, being able to play a role like that, especially in that time and era, it made me very proud and was a very humbling experience.

L+T: Talk about your relationships and interactions on the show with Dunn Purnsley and Dr. Valentin Narcisse thus far. They’re always tense moments.
MKW: Erik LaRay Harvey is the actor who plays Dunn Purnsley. This brother, man, from day one, he came on the set and just exploded. I don’t even know if they had plans to bring that character to the level he’s becoming, but I think that’s a testament to his portrayal of Dunn. On a real-life basis, I couldn’t wait to read the script when I saw that he and I had scenes together, because he’s a phenomenal actor and great dude. I always had a ball working with him. Jeffrey Wright who plays Narcisse, that was a check off my bucket list. I’m a huge fan of his, I’ve studied his work over the years, and he rose my game and made me that much sharper. To go toe-to-toe with him, I could not come half-assed and I had to bring 110 percent of my A-game and take it to another level after that. Working alongside him in those scenes, playing these iconic Black characters, it took my game to another level. 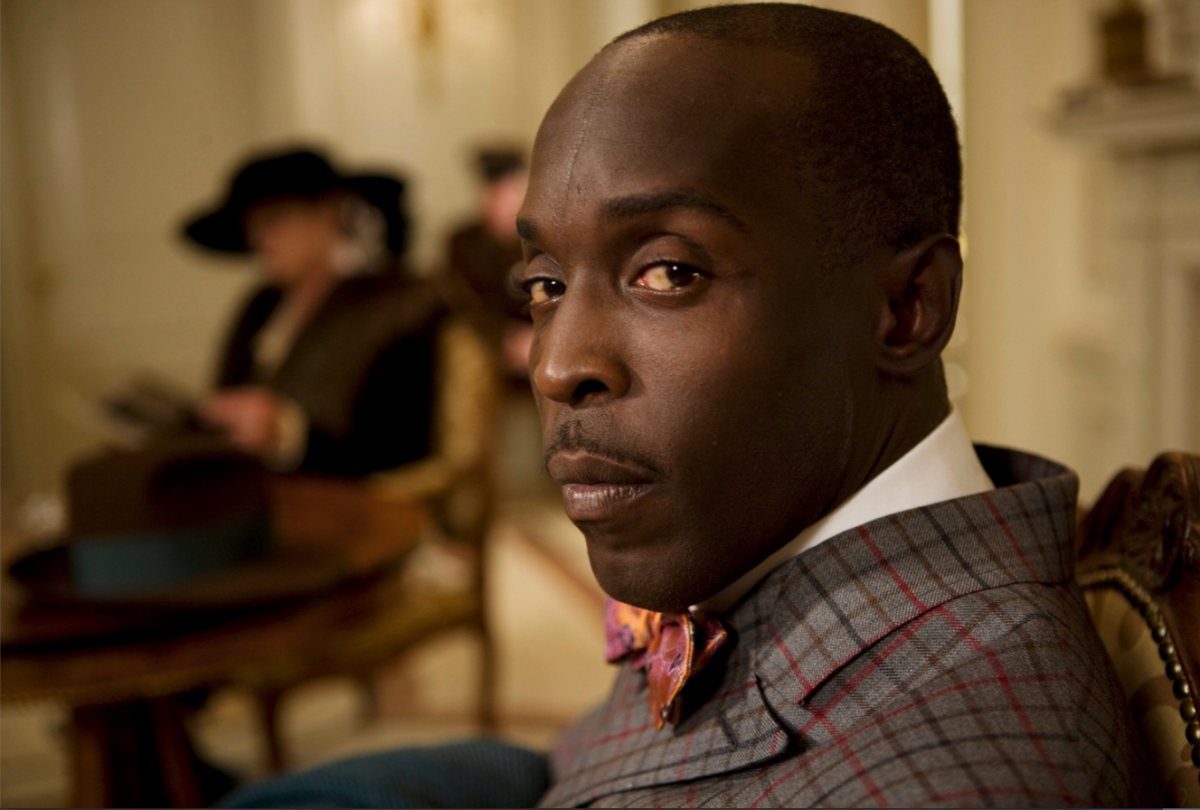 L+T: How did playing Omar on The Wire and having so much success prepare you for being Chalky? What did you learn from being Omar?
MKW: I actually equate The Wire to my college days. I did a lot of growing professionally and personally on that show. That’s the first time I’d ever carried a character for that long, so I learned what that means. It was a huge learning experience for me and it was definitely my breakout role, and it prepared me for the arena that I’m in now with Boardwalk Empire. I’m very proud of The Wire and what it brought me, but Boardwalk Empire opened me up to another fan base that The Wire probably would have missed. Having the knowledge and experience of being on a show as intense as The Wire and playing a character like Omar as complex as he was, it gave me the experience to bring a character like Chalky White to life.

L+T: You’ve talked before about listening to music to help you get into character and making specific playlists. What is on your Chalky White playlist?
MKW: It depends on the scene. For instance, I believe it was Season 1 when Michael Pitts’ character Jimmy Darmody, Nucky Thompson – played by Steve Buscemi – and myself, Chalky White, we got together and figured out that these cats from Philadelphia were trying to cross us. So, we set them up and were gonna kill them in this barn, one of Chalky’s spots where he hid bootleg liquor. One of the white boys called Chalky a “nigger.” Chalky just looked at him and then choked him with his bare hands, his feet were up off the floor. For that scene, I remember listening to Nas’ “N.I.G.G.E.R.” off his Untitled album. I kept putting it in my head, listening to it over and over and it got me right to that point where I just went somewhere else that I needed to go to breathe life into that scene. I listened to a lot of James Brown for Season 4, The Payback; a lot of Aretha Franklin, I listened to a lot of Ohio Players last season. If you look at every playlist I’ve made for my characters, there’s JAY Z, Nas, Pac, Biggie, Jeezy and Kanye. Those are my staples, there’s always some voice or some song that they have in their catalog that breathes life into what I need. Common is also another one of the artists I always go to.

L+T: In what ways has being from Brooklyn helped you play the parts of Chalky and Omar?
MKW: My background, as many people know, I grew up in the projects in East Flastbush, Brooklyn. Anybody that knows that community knows it’s heavily migrated by Carribean and West Indian culture. The violence was high. I remember going to someone in my hood who I really respected as a gangster and I asked him – I had never really bust a gun before – “How do you really bust a gun? Not cheesy, not TV bust a gun. How do you really bust a gun?” He took me to the roof and we had shooting practice on the roof. He said, “Mike, you wanna grip with both hands and you wanna hit your target. Later for all those stray bullets, you wanna hit your target because the one time you miss, they might get you.” He pretty much taught me how to shoot on the roof of my building, we had target practice up there. The demeanor of dudes I grew up watching, they wasn’t really big on a lot of talking. West Indian dudes, when they put that screw face on, it’s like, “ohhh,” dude’s get quiet and it happens. I knew I wanted to make Omar a man of few words. He wasn’t a big talker, he wasn’t a rah-rah dude. I wasn’t like that. Everybody that knows me knows that I was not the gangster growing up. I know gangsters, I grew up with them, they love me to death, but I had enough sense to know the streets would have eaten me up if I tried to cross that line. I didn’t have it what it takes to survive in that world, so I think they respected me for that. What I did have in common with Omar was his vulnerability and sensitivity. I didn’t try to play it like an alpha dude, I played him as a dude that if you crossed him, hurt his feelings, backed him in a corner or messed with his family, he will kill you. That’s when I found my connection to him. People often say, “Was it hard to play on his sexual orientation?” I’m like, “No, that was nothing. So what, dude likes dudes. That was nothing.” But to play the role and have that menacing factor of him come across as true and believable, I had to find it from a different route, which wasn’t the alpha male. It was the vulnerability and sensitivity that made him volatile. That’s what I understand and that’s how I played that role.

L+T: How would you compare Omar to Chalky White?
MKW: What Omar and Chalky have in common is they are both led by their own moral codes. The difference between them is Omar is in it for the thrill of the hustle, Chalky’s in it as a businessman. There was a time when Chalky’s youngin’ got killed and he used that as leverage on Nucky to get more money out of the deal. Omar would have been like, “I don’t wanna hear nothing until I kill the dude that killed my dude.” That’s the difference they had. Chalky realized, “Me wildin’ out won’t bring my dude back, but I will make damn sure that his death serves a purpose in terms of what I need to do and make sure that it never happens again.” That’s how they differ, but they both had a very strong moral code.