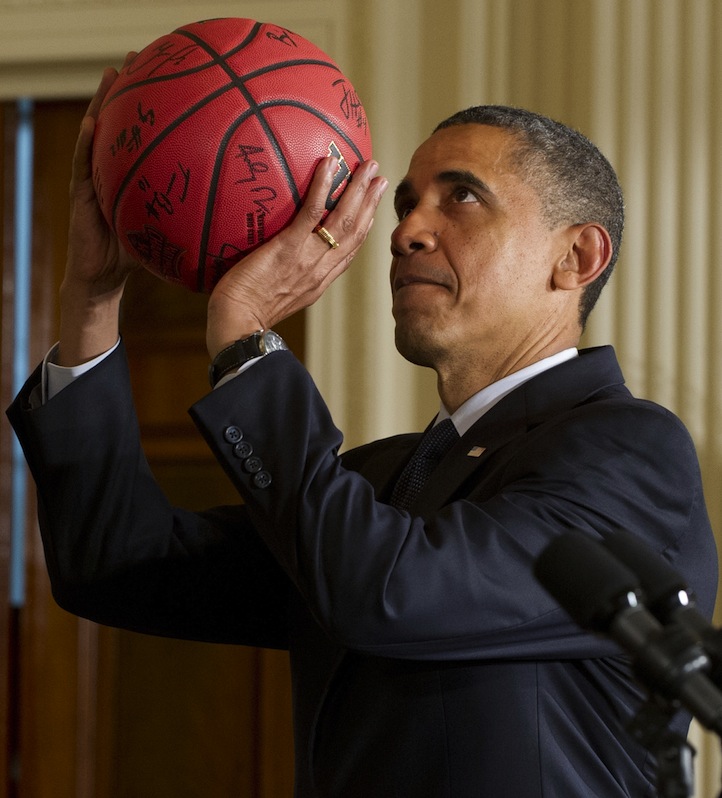 With Decision 2012 only three months away, Obama for America is bringing together a group of past and present NBA superstars to appear in an exhibition game to boost the President’s fundraising efforts for his reelection. According to CNN, after losing the monthly fundraising battle in July for the third straight month to Republican challenger Mitt Romney, the Obama campaign announced a new initiative on Tuesday, to encourage smaller donors to enter the “Obama Classic” contest for a chance to play with current and former NBA and WNBA superstars. The winner will also get the opportunity to dine with President Obama and six-time NBA champion and five-time league MVP, Michael Jordan.

“Pitch in $3 or whatever you can, and you’ll be automatically entered for a chance to win. Hit the court with Patrick Ewing and Melo? Trade stories with the President? This is the kind of stuff your kids will tell their kids, and no one will believe it until you show them a photo,” wrote Marlon Marshall, the Obama for America Deputy National Field Director, in an email to the press on Tuesday. “Oh, and you’ll get to meet President Obama and Michael Jordan over dinner, too.”

Originally organized during the 2011 NBA lockout, the “Obama Classic” was an exhibition game scheduled for last December at a time when basketball fans were reeling from the effects of the strike. When the owners and players came to an agreement on Thanksgiving Day, Obama Classic organizers Vince Carter, Baron Davis and Chris Paul sent out an email announcing that the game was being postponed until summer 2012 due to the start of the truncated NBA season.

Obama for America –known for embracing and spearheading social media outreach during the 2008 Presidential election– has run similar fundraising efforts like this before. From raffling off dinners with the President and the First Lady Michelle Obama to trips to the President’s birthday party and even an invitation to a fundraiser at actor George Clooney’s house in May, Obama’s campaign have created contingency plans. According to a report by the Huffington Post, supporters donated an average of $23 in hopes of winning a ticket to the event –propelling the fundraiser’s total haul to $15 million when coupled with the $40,000 individual tickets.

Money wasn’t supposed to be a worry for the President’s campaign, which smashed fundraising records in 2008. In ‘08, small donors and celebrity endorsements helped Obama to sweep his way into the White House. In February of that year, Obama raised a total of $55 million, with $23 million coming from small donors alone. Four years later, President Obama’s campaign has implemented the same tactic to aid in his reelection and now No. 44 looks to turn to old No. 23 for the biggest assist of his career.

“Republicans buy shoes too,” Jordan stated in 1990, as he refused to endorse Harvey Gantt, the former democrat mayor of Charlotte who ran for the Senate seat in his native North Carolina. The quote has been synonymous on MJ stance on politics. Some 20 years later, Jordan finally looks to suit up and use his popularity and celebrity influence to help sway as many voters towards the polls in this decisive presidential election.

Mitt Romney’s team has hauled in more money than President Obama and his allies for a third consecutive month. According to the Associate Press, on Monday, Romney reported a July fundraising haul of more than $101 million along with the Republican National Committee, compared to the $75 million that Obama’s campaign said it had brought in along with the Democratic National Committee. Before Romney’s summer surge, an opponent had not outraised Obama since 2007. With the help of MJ, the fundraising gap between Obama and Romney should narrow.