There aren’t very many games like the Metal Gear series. The creation of Hideo Kojima over 25 years ago back when Nintendo ruled the gaming world, Metal Gear is far more than an action-adventure stealth video game. It’s complex story that blends realistic themes such as nuclear war and political corruption with action theater sequences that could have been pulled out of an Arnold Schwarzenegger film.

As gaming consoles have evolved, so has the franchise. What started as a fairly ugly 8-bit game has become a beautiful work of high definition art. And, with that, Kojima has been able to take the gamer on an extraordinary journey through the history and life of lead character Solid Snake with the help of unique villains, noteworthy companions and a tale that travels the course of 80 years.

The upcoming fifth chapter of the game, Metal Gear Solid V: The Phantom Pain, is a connector of sorts between games. It helps us understand how the heinous Big Boss went from hero to scoundrel while utilizing the next generation of consoles to max out the games open world format. At the 2014 E3 convention, Life+Times was given an exclusive look at the forthcoming fifth installment before it hits shelves in 2015. To suggest it was impressive might be undermining its value.

Utilizing the real life US detention of suspected terrorists in Guantanamo Bay to fuel its fictional narrative, The Phanton Pain picks up where the brief teaser that served as a ‘before the opening credits’ installment, “Ground Zeroes,” left off while also serving as a sequel to 2010’s Metal Gear: Peace Walker. Without giving too much away, “Ground Zeroes” gave players a glimpse into the life of Snake – before he became Big Boss – and left us with a chilling finale that would assist in Snake’s change in attitude. “It’s a process similar to what happened to Breaking Bad’s Walter White,” Kojima said when explaining Snake’s transition while at E3. “He’s not necessarily the bad guy but he needs to get payback for what happened in Ground Zeroes. I want people to empathize with this story but realize that no matter how you look at it, this will end up being something bad.”

Kojima’s primary talking point was how he wanted the player to empathize with Snake’s situation and understand just how a man can shift from good to bad. More often than not, games thrust players into the hero role and never really explore the complexities of a antihero’s makeup. Because, in all honesty, most villains didn’t start off wanting to be the bad guy, they just ended up that way. “We wanted a sense of loss and pain,” Kojima continues. “Which is why it is called The Phantom Pain. It is about the loss that is still stinging you. We want you to understand that feeling while playing through the game.”

But what is a good story if the game isn’t fun? Although we didn’t get our hands on Metal Gear Solid 5, we were treated to a hands-off 20 preview of the game running on the Playstation 4. The demo shown focused on Snake’s mission to infiltrate an Afghan village and obtain information on an imprisoned ally. It started with Snake riding his horse alongside Ocelot – a future enemy of Big Boss’s son, Solid Snake. The scene is visually striking as the two make their way to the village. The desert is populated by wildlife and the scope of the terrain is ripe with canyons, creeks and a lively environment that has real-time weather changes.

The setting is nine years after Ground Zeroes and the carnage from those events are visible on Snake. He now sports a prosthetic limb and has a large piece of metal wedged into his head. The amount of detail is staggering. Animals unpredictably move around and the effects of the wind blowing through trees are visible. As a nod to Kojima’s toilet humor, if your horse stands around too long, he’ll defecate on the ground. Yes, it’s really all there. 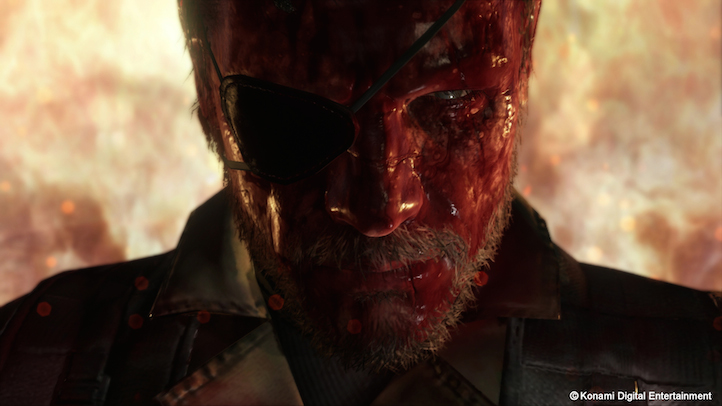 What makes The Phantom Pain differ from previous Metal Gear installments is the notion that all missions can be tackled a number of different ways. Gone is the linear experience and now the freedom to choose your path of infiltration is present. You can run into the village with your guns blazing or quietly sneak around and pick off your foes with a tranquilizer gun. The sheer wealth of choices was impressive. Our preview found Snake opting for the sneakier route. The cardboard box from early Metal Gear games is back but with new bells in whistles. Instead of just hiding in the box, Snake can now pop out to shoot. And if a guard sees him, he can quickly vacate the box and hide elsewhere while the guard inspects the area that he last saw Snake. Other stealth elements found Snake hanging off of the side of his horse to stay out of view as well as the new ability to roll on the ground while crawling. Again, the options are what impressed the most.

Those that are familiar with Peace Walker will appreciate the return of both the Mother Base and the Fulton System. The former is a fully customizable oil rig where Snake and his fellow Diamond Dog soldiers reside while the latter is a skyhooking system that transports supplies and captured soldiers to and from Snake. Watching the giant balloon zip away subdued soldiers was impressive. But witnessing the balloon lift livestock over to the rig, only to be part of the base’s population was downright awesome.

Boasting a world that is “200 times” the size of Ground Zeroes, this small taste of the land was said to be just a morsel of what’s to come. Everything from lighting changes throughout a 24-hour cycle to watching as guards converse amongst one another and eventually take a nap between shifts is all the more reason to believe that Kojima will strike gold once The Phantom Pain is released next year. 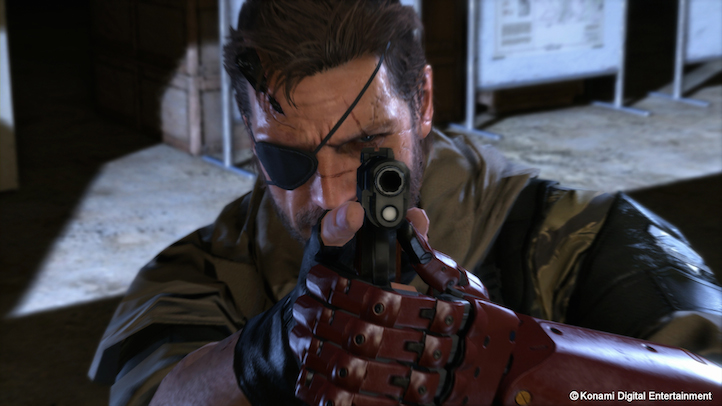