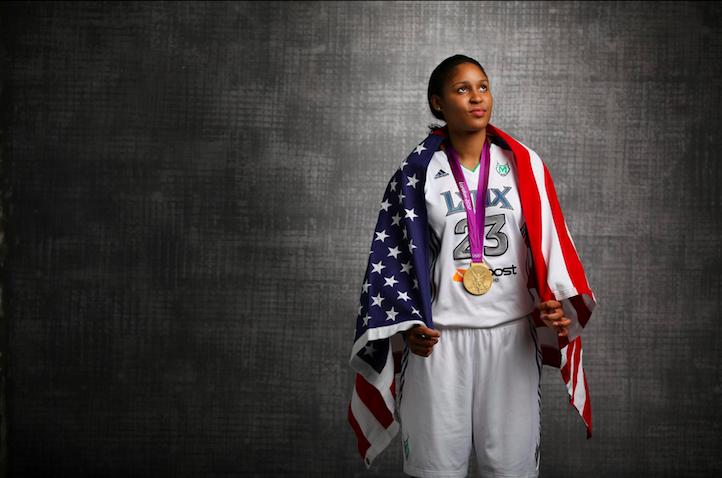 Losing can be a hard thing to cope with, so the best way to deal with it is by completely avoiding it. That’s what Maya Moore has done – not lose. Over the past three years, she’s been, perhaps, the greatest winner in all of women’s basketball: back-to-back NCAA National championships at UCONN in 2009 and 2010 (when the Huskies were 39-0), a WNBA championship in 2011, a Euroleague championship in 2012, Olympic Gold in London this summer, and now, her Minnesota Lynx, at 26-5, have the best record in the WNBA. Quite a run, to say the least.

Life+Times got a chance to speak with the humble winner just hours prior to the Lynx having their 11-game winning streak snapped by the Chicago Sky, and discuss some of the keys to her success.

L+T: How have the Lynx been able to get in such a good groove after the one-month break during the Olympics? Did having three players on the Olympic team help?
Maya Moore: It was our goal [to come out strong after the break]. I don’t know if anyone really predicted how well we were going to start off, but the three of us (myself, Lindsay Whalen and Seimone Augustus) that were over in London had a really good groove, focus and rhythm coming back from the Olympics, and we just carried that over to the Lynx. Also the work that my teammates and coaches put in while we were away I think came together nicely for us. We were just focused. We ended the break well with our last two games, but the three games before that we had lost, so we were still burning from that. We just took all the things I just mentioned and played basketball, and so far we’ve done really well.

L+T: Talk about your Olympic experience, especially playing with so many former UCONN Huskies and playing for college coach Geno Aurriema.
MM: Yeah, it’s a little bit different [playing for U.S. Women’s coach Geno Aurriema now]. He doesn’t yell at you as much as an Olympian, but he’s just as energetic, focused, enthusiastic, cracking a joke here or there, always demanding the best out of us. It was really fun to play with many players that were familiar with what he likes to do which is play basketball: pass, cut, screen, make reads. It was beautiful to play and I think that’s what, hopefully, everybody saw out there. We were just playing off of each other. It was really fluid and when we got out in transition it was just ridiculous. So, whether or not you went to UCONN, by the time we were together as an Olympic team, everybody knew the expectations and what he wanted and the style of play that we were running.

L+T: Personally, you’re on a great run. The NCAA championships, WNBA championships, Olympic gold, etc. How have you been able to do it? Do you even know what it feels like to lose?
MM: [There’s] a couple things I like to do to stay consistent, and one of them is just focus, and that happens every single day. Some of the big picture stuff you just mentioned, happened because of the little stuff. Little things, little goals, the little things in practice and each part of practice which lead to the games. Then every single game during the season you just tackle [the little things]. And then you get conference championships, national championships, Western conference championship, and you just keep building on it. Another thing is the team’s that I’ve had. If you look at my history, it’s no secret – I think the secret’s out – I’ve had great teams. Every team that I’ve played for, we should have one. Sometimes that’s the hardest thing to do: when you should win, to actually to do it, because everybody’s gunning for you. So, I’m really blessed with that, and taking the mistakes that not a lot of people see, and trying to fix those and cover those up so that when we do get to the games, the weaknesses are minimized. A lot of different reasons, but I’m just very blessed to have been on the teams that I have, and the timing of my career and coaches I’ve gotten to play for.

L+T: Going from college, to the WNBA, to overseas, back to the WNBA, to the Olympics and back to the WNBA, you really haven’t had a break. How have you been able to maintain with no real extended period of time off?
MM: It’s a grind. It’s kind of an issue that we don’t necessarily have a set solution for because the overseas season is pretty much like the college season as far as the length of time. We make a good living over in Europe. And I’m going to China [in the upcoming season]. I’m only going to do a four month season. That’s how I’ve kind of been coping with it. I did a four month season [in Europe] in the spring, so I had three months off in fall 2011. Then I’ll have next spring off, so this will be the first time I’ve gone year-round. It’s gonna be hard but I just try to focus on one season at a time. It was very interesting last year playing for five different teams over the span of 14 months. I’m glad to back with this Minnesota Lynx right now, though, because we’re doing so well and I love all my teammates. I’m going to enjoy every minute before I head over to China.

L+T: Given your success, and the dominance of USA Women’s basketball in the Olympics, is it difficult to deal with the being so overlooked and unrecognized despite your greatness?
MM: Well, we love the game. We play because we love the game. Whether someone is cheering for us or not, you can see the level of the game in many of the elite players. It’s a work in progress. We know that our history as a pro league is not as long as the NBA or some of the other pro leagues in the U.S. or in the world, so we’re working every day to make sure that people know about us. Hopefully, other people, once they taste and see, they’ll become hooked to the game just like we are. We know it’s not the product because we’re producing on the court, so we’re just trying to get people to come to a game and experience it. Every person I meet that comes to a game says, “Wow, I didn’t know it was this much fun. I didn’t know it was this exciting and competitive.” That’s the goal. To get more TV exposure, get more people coming to the games and move on from there.